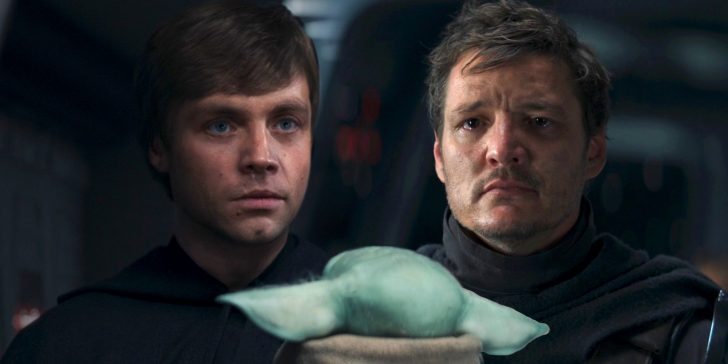 Pedro Pascal reveals that he always knew Luke Skywalker was going to appear in The Mandalorian season 2 finale, unlike his Star Wars co-stars.

Pedro Pascal knew that Luke Skywalker was going to be in The Mandalorian season 2 finale. The actor first made his debut as Din Djarin in 2019 when Disney+ first launched and has since cemented Din’s place in the Star Wars galaxy. The series’ sophomore season drew in even larger audiences that are now excitedly awaiting The Mandalorian season 3, which wrapped filming last month and will reportedly release in the later part of this year.

Din’s most recent appearance was in The Book of Boba Fett, where he made his full return earlier this year in “Chapter 5: Return of the Mandalorian.” His story provided some insight as to what he was up to following the emotional conclusion to The Mandalorian season 2, where he handed Grogu (aka “Baby Yoda”) off to Luke Skywalker. Viewers saw Din struggle with using the Darksaber, be banished from his Mandalorian tribe, and return to Tatooine on public transport in order to customize a Naboo N-1 Starfighter with his friend Peli Motto. Din then took his new ship to see his foundling, which led him to Luke’s new Jedi Academy and brought the iconic Jedi back to viewers’ screens.

Now, Pascal has revealed that he knew all along about Luke’s return to the Star Wars universe in The Mandalorian season 2. In an interview with Vanity Fair to promote his new film The Unbearable Weight of Massive Talent, Pascal took a lie detector test as he faced questions about his career and his pop culture. One of these questions focused on Luke’s The Mandalorian cameo, as Pascal was asked if it was true that he didn’t know Luke was going to be the Jedi who took Grogu. Pascal responded by saying the statement was in fact not true. Afterwards, however, Pascal sat in silence with a look and smile that seemed to imply the actor had more to say, but couldn’t. See the full exchange below:

Q: Is it true that you didn’t know that Luke Skywalker was in the season 2 finale?

Pascal knowing about Luke’s appearance seems to be the one exception to all the secrecy surrounding the Jedi’s return. Efforts to keep Luke a secret from Mandalorian viewers were so intense that even official concept art for the series saw Luke drawn as Plo Koon, a fan-favorite Jedi from the prequel Star Wars era. Pascal’s co-stars such as Ming-Na Wen (Fennec Shand) have previously shared that they had no idea it would be Luke returning, so it’s interesting to know that Pascal was in on the secret. With the trust built between Pascal and executive producers Jon Favreau and Dave Filoni, though, it’s no surprise. Pascal has stated before that he’s often given the chance to help shape Din’s character and story along with The Mandalorian’s show-runners.

For someone who has previously shared they’re not good at keeping secrets, Pascal has held up his end with The Mandalorian, something he continues to do concerning season 3. So far, the only thing he has revealed is that the upcoming season will see “many new faces.” Otherwise, the actor has remained tight-lipped about what to expect from The Mandalorian season 3. What audiences can likely expect is a much bigger focus on Din’s story as opposed to just Grogu’s, with some details pointing towards a journey to the planet Mandalore. The Mandalorian season 3 may have the potential to be the biggest and best yet, but with Pascal staying quiet about a huge reveal like Luke’s return, clearly Favreau and Filoni can depend on him keeping more surprises to himself.

Next: The Mandalorian’s Story Mirrors Ahsoka’s From Clone Wars Through Rebels