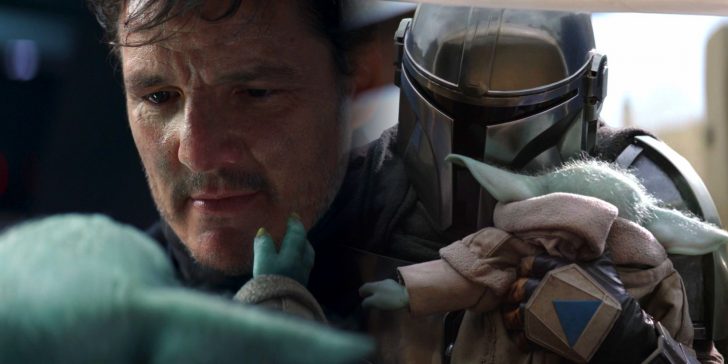 Pedro Pascal reveals just how much The Mandalorian’s Din Djarin loves his foundling Grogu in an answer to a question about the actor’s upcoming film.

Pedro Pascal has revealed just how much his titular character in The Mandalorian loves Grogu. The bounty hunter’s heart was first captured by Grogu, known to many as “Baby Yoda,” at the same time the audience’s was in episode 1. Ever since, Din Djarin has done whatever it has taken to keep Grogu safe and to reunite him with his Jedi kind. The journey has brought the pair of foundlings closer together than either of them expected, and now, both they and the world beyond the screen sees them as father and son.

It was Grogu’s love of Din that began to change the bounty hunter in The Mandalorian season 1. The little one used the Force to saved Din from a mudhorn, despite the fact Grogu had been hiding his abilities to keep himself safe during the Jedi Purge that followed Order 66. That act of care towards Din made it impossible for him to leave Grogu behind with the Imperials on Nevarro and caused him to turn back, and take him on the journey that’s since culminated in the events of The Mandalorian seasons 1 and 2. The depth of Grogu’s love for Din was fully revealed by Ahsoka Tano (Rosario Dawson) in “Chapter 13: The Jedi,” when she told Din that he was “like a father” to Grogu. There was no hiding the admiration the little one had for his guardian who had sworn his life to protecting the foundling.

Related: How Grogu Can Still Get A Lightsaber (Despite Choosing Mandalorians)

Now, Pascal himself has revealed just how much Din loves Grogu in return. In a video shared by spoiler4you on Twitter, Pascal is asked a question whilst attending the SXSW premiere for his upcoming film The Unbearable Weight of Massive Talent that wonders if his character, Nicolas Cage super fan Javi Gutierrez, loves Cage more than Din loves Grogu. Pascal was shocked by the difficulty of the question as he insisted it was an “impossible question to answer.” He went on to insist that it was a “question worth answering” because answering it alone would be a testament to his character’s adoration for Cage, since “we all know how much Mando loves Grogu.” Pascal added this with an expression of pure sincerity and, no doubt, affection of his own for the little one. See the full video below:

Comparing Din’s love for Grogu to that of a super fan is a huge testament to the Star Wars characters’ bond. If Pascal’s words aren’t enough to prove this, Din’s actions surely are as he made himself complete the largest test of love there is: letting Grogu go. Din did this not once, but twice, intent on putting Grogu’s best interests before his own. In the finale of The Mandalorian season 2, Din let Grogu go with Luke Skywalker, despite the fact Grogu had left the decision up to Din. He was faced with a similar decision in The Book of Boba Fett episode 6, where he chose to leave a gift of armor with Ahsoka rather than giving it to Grogu himself so as to prevent making Grogu’s training harder. There’s no doubt that this strong affection between father and son has become the heartbeat of the Star Wars spinoff, and with the duo’s sweet reunion in the finale of The Book of Boba Fett, viewers will get to see even more of it in The Mandalorian season 3.

However, Din’s love for Grogu has come at a price, one that will continue to steer his journey in season 3. In The Mandalorian season 2, Din was faced with yet another choice: let Moff Gideon (Giancarlo Esposito) get away with Grogu, or remove his helmet and acquire the coordinates to save the little one. Din chose the latter, and in The Book of Boba Fett episode 5, he faced the consequences. He was banished by his tribe and learned he can only earn atonement from the “living waters beneath the mines of Mandalore.” Between this and Din’s acquisition of the Darksaber that calls him to lead all Mandalorians, his journey has no doubt been set towards his origin planet. While this journey of exploration will no doubt be difficult for Din, he won’t have to face it alone now that Grogu has returned to him. Father and son will continue to support and love each other as their journey shifts from Grogu’s story to Din’s own, no doubt in ways that will only strengthen their bond.