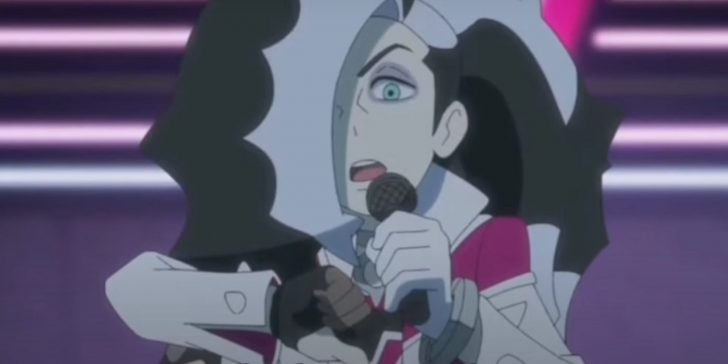 The Dark Gym Leader Piers from Pokémon Sword and Shield’s Galar region has debuted in Pokémon Journeys, showcasing new aspects to his personality.

The Dark-type Gym Leader Piers from Pokémon Sword and Shield has made his first appearance in the Pokémon Journeys animated series, revealing new information that confirms he is one of the best NPCs of the Galar region. Pokémon Sword and Shield introduced a number of characters that have become popular with fans of the series, including the powerful Galar Champion Leon, his ambitious little brother Hop, and the Dragon-type Gym Leader Raihan. The colorful characters and well-rounded story they help deliver make adventures in the Gen 8 games exciting and fun to engage in.

In Pokémon Sword and Shield, Piers is the Gym Leader of the Seventh Gym in Spikemuth. He is also the accidental leader of Team Yell, which turns out to be a collection of trainers from the Dark Gym who have gone astray with good intentions while trying to support Piers’ younger sister Marnie. Piers’ story is surprisingly emotional, as he has been struggling to deal with the mental manipulation of Sword and Shield’s terrifying villain Chairman Rose. Rose has been strangling the life out of Spikemuth in an attempt to convince Piers to move the Dark Gym over a Power Spot that will allow Dynamax and Gigantamax battling, leaving the young Gym Leader to shoulder the guilt and burden of the town’s economic collapse.

In episode 99 of the Pokémon Journey’s animated series, players follow Ash and Pikachu’s first encounter with Team Yell, who are trying to prevent him from showing up to his match against Marnie in order to secure her victory. The mayhem created eventually leads Ash to Piers in Spikemuth City. With the same dramatic flair seen in Pokémon Sword and Shield, Piers appears on stage with his microphone, introducing his team of Pokémon to Ash as his band. Upon realizing what has happened, he quickly agrees to help Ash get to the match against his sister, offering the same surprisingly helpful and kind personality he shows in both the game’s main narrative and post-game.

Piers Is One Of Pokémon Sword & Shield’s Best Characters

One of the best moments of the Pokémon Journeys episode is when Piers offers Ash a ride to his match, where he’s driving carefully and slowly down the road as other cars pass him, with both he and Ash wearing helmets and Piers himself wearing a pair of sunglasses to shade his eyes. This is a fantastic contrast to the hardcore personality he presents as Gym Leader, but also confirms the kinder side players see when he steps up to be of assistance during Pokémon Sword and Shield’s gameplay. Despite being set up as some brooding Gym Leader in the game, he’s actually a much gentler character who’s always willing to help out the protagonist.

While many characters in the Pokémon games and animated series have suffered from tropes and stereotypes, Piers’ appearance in the anime confirms his multi-dimensional personality traits, backing his status as one of the best characters in Pokémon Sword and Shield. These contrasts make him interesting and likable, encouraging Pokémon fans to become connected with his story and the struggles he has been through. To add to this, he is also an admirable big brother to Marnie, supporting her both in the episode as she battles Ash, and even giving up his Gym Leader position in Pokémon Sword and Shield so she can take his place, giving her a chance to shine.

Next: Legends: Arceus’ Volo Vs. BDSP’s Cynthia – Which Fight Is Harder

Laura Gray is a writer, illustrator and gamer in cozy Boise Idaho. They have had a wild freelance career in being a nerd, spending time traveling as a professional cosplayer and becoming a published illustrator while working the night grind as an IT tech. Laura is currently a content writer for D&D campaigns and Screenrant while working on personal writing projects for publication. They are also busy welcoming their first child into their life, which has been the best adventure life has given yet.