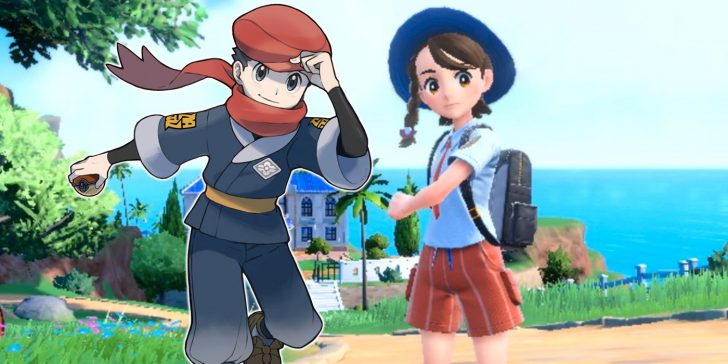 Pokémon Scarlet and Violet has just been announced, and it needs to take from Legends: Arceus and not fall into the mainline series’ flaws.

Pokémon Scarlet and Violet have recently been announced, and hopefully, they stay true to the new direction that Pokémon Legends: Arceus took the series in. Some features, like seamless open environments and Pokémon wandering about the overworld, have already been confirmed, but others still remain a mystery. Given the success of Legends: Arceus, it would be a good thing if Scarlet and Violet took a lot from its direction.

Recently, the Pokémon company had a Pokémon Presents video to celebrate Pokémon Day, the day that the first-ever games released. In that video, some news about the various ongoing games came to light. Pokémon Unite, for example, saw a new addition to its roster. Legends: Arceus and Pokémon BDSP also got updates with new content, including Alpha Pokémon in mass outbreaks and a Shaymin storyline. The biggest news, however, was the trailer for Gen 9, which showed a preview of the region and revealed its starter Pokémon. The trailer came as a surprise to most, especially since it’s stated to release late this year. Some details have trickled in since, but little is known so far.

There are a few things that Pokémon Scarlet and Violet need to take from Legends: Arceus in order to be the best Pokémon game yet. One of them is the new capturing system that debuted in Hisui. Another is the traversal and exploration options, which is promising given the open world. Other, smaller, details include the Linking Cords that allow players to evolve species that could previously only do so through trading, which has become more difficult on the Nintendo Switch. The Pokémon revealed in Scarlet and Violet’s trailer don’t include any trade evolutions yet, but some may come to light as time goes on. The Linking Cord or a similar item isn’t the only small detail that should cross over, but it’s one that some fans are hoping for.

One of the biggest innovations in Pokémon Legends: Arceus is the new capture system. Instead of just entering battle and throwing a Poké Ball, players are able to creep through tall grass and sneak up on Pokémon in order to catch them manually. Special items and different Poké Balls can help their chances of making a successful capture, and even though battles still only offer the old method, it’s still a big change, one that’s been welcomed by the fanbase. Capturing Pokémon is half the fun of the game, and the new system is a big part of what sets it apart from previous titles. If not for Legends: Arceus’ shrinking Pokémon explanation, some would likely be catching everything in sight.

In order to stand out from previous Pokémon games, and for the company to show its fans that it’s learned from the mistakes of its past, Pokémon Scarlet and Violet needs a capturing system akin to Legends: Arceus. The fact that Pokémon are confirmed to wander the overworld is a promising sign that the next games will be more like Hisui than not in terms of capturing, but it’s still unknown as of yet. The company has some good momentum with innovation, which it can use to give players a capturing system that goes beyond what Legends: Arceus did. A greater variety of Poké Balls along with new features can make Scarlet and Violet’s capturing even better than the newest game.

Pokémon Scarlet & Violet’s Open World Should Be Fun To Explore

Another feature that sets Legends: Arceus apart from previous Pokémon games is its open world. Pokémon Legends: Arceus’ environments, empty as they are, are a big step up from older games. Up until then, the series’ maps had largely followed a linear path, with little opportunity for deviation. It might not have been a fully open world like Legend of Zelda Breath of the Wild has, which came as a disappointment to many, but it was still more open and free than any other game that had come before it. Pokémon Scarlet and Violet are already confirmed to have a similar open world, one described as being seamless with no transition mechanics between populated areas and wild ones. This means that Scarlet and Violet is likely expanding on Hisui’s open world and bringing the true open-world treatment to the Pokémon series.

A big part of the appeal of Legends: Arceus’ open environment is how explorable it is. Legends: Arceus is different from normal Pokémon games, and one of the reasons why is because players can climb tall mountains, ride across the waves, and fly through the sky. There’s a lot to see and find in the game if one knows where to look. In order to take full advantage of its open world, Scarlet and Violet needs to have similar or better options for exploring it. It doesn’t have to have the Ride Pokémon that were in Legends: Arceus or the Sun and Moon games, but it should have some options for climbing and swimming at the least, especially since swimming without Basculegion isn’t possible in Legends: Arceus.

Of course, not every feature in a game is a big one. Small features are just as important, perhaps even more so. Legends: Arceus introduced some features that might seem minor, but are all the same a part of what makes it good. Pokémon Legends: Arceus’ Linking Cord is a sign that the company is attentive to player feedback. It’s an item that allows players to evolve Pokémon that previously could only be evolved through trading, such as Kadabra into Alakazam or Graveler into Golem. Its inclusion finally put into reach Pokémon that were previously unavailable to players who weren’t able to trade for whatever reason. Scarlet and Violet should feature this item – or at least something similar – so that the series doesn’t backslide into trade-exclusive evolutions.

Another small detail is version-exclusive Pokémon. Until Pokémon Legends: Arceus, each mainline game had two versions, each with a few Pokémon species that could only be found in one or the other. Some were disappointed by the repeat of this trend in Gen 9, and hopefully there won’t be any Pokémon that will be absent in either one. Even after three months, Pokémon BDSP is still missing trading features, which doesn’t bode well for players’ ability to get them if there are. It’s tough to predict whether there will or won’t be exclusives, since there are already other visible version differences in the form of the protagonists’ clothing, and yet there would seem to be few reasons to have two different versions without some exclusive Pokémon. They’ve bothered fans for a long time, especially so since the series’ move to the Nintendo Switch and the subsequent paid subscription required to make trades, so hopefully Pokémon Scarlet and Violet both have all of Gen 9’s species available.

Next: What Pokémon TCG: Brilliant Stars Cards Are Worth The Most Money

Austin Geiger is a nerd and a Game Features author at Screen Rant. He has loved to read, write, and play video games for longer than he can remember, and does each one daily. He likes Pokemon, Digimon, The Elder Scrolls, and more.