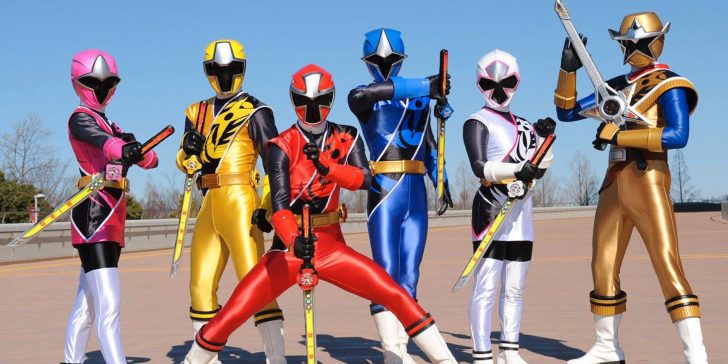 Power Rangers Ninja Steel is the 24th season of the long-running superhero series. Here’s a guide to its cast members and their characters.

Who is in the Power Rangers Ninja Steel cast and which characters do they play? There’s no denying the Power Rangers franchise is a curious beast. Cobbled together with footage from Japan’s long-running Super Sentai TV show that’s spliced with original scenes featuring an American cast, it’s a pretty bizarre series with a rather repetitive premise that often veers into cheesy territory. However, considering that the show has 29 seasons under its belt and counting – not to mention various movies and other spinoffs – the franchise must be doing something right with audiences.

Power Rangers Ninja Steel is the 24th season and first aired in 2017 on Nickelodeon. It features the same basic formula of past seasons by following a group of teenagers who morph into a Power Rangers superhero team to defeat an evil alien villain hellbent on taking over the galaxy. In season 24, the titular Ninja Steel Power Rangers team are the focus of the show and are tasked with protecting an ancient artifact named the Ninja Nexus Prism from an alien game show champion called Galvanax who wants to use it to become invincible.

It might not be considered one of the best seasons in the long-running franchise overall, but it still has that undeniable Power Rangers charm.  Read on for a quick guide to the main Power Rangers Ninja Steel cast and their characters.

William Shewfelt plays Red Ranger and team leader Brody Romero. Before he became the Red Ranger, Brody was kidnapped by the villainous Galvanax and forced to work as a slave for his intergalactic game show Galaxy Warriors. He eventually escaped back to Earth where he united with his fellow Ninja Steel Rangers.

Yellow Ranger Calvin Maxwell is an expert mechanic but has a fear of driving following an accident – something he is forced to overcome to save his fellow Rangers from a villain called Tangleweb. Calvin is played by Nico Greetham who has also had roles in American Horror Story and Love, Victor.

Jordi Webber is a New Zealand actor and musician who joined the Power Rangers Ninja Steel cast midway through the season as Levi Weston, a country singer who becomes the Gold Ranger. It’s soon revealed that Levi Weston is an alias and he’s Brody’s long-lost brother.

The Wheel Of Tim’s Zoë Robins plays Hayley – an outdoorsy, nature-loving teen who becomes Power Ranger Ninja Steel’s White Ranger. She’s also Calvin’s girlfriend, but their relationship is tested several times, both by regular high-school drama and the battles they face as their Power Ranger alter-egos.

Kind-hearted Preston is an aspiring magician who adopts the Blue Ranger mantle and serves as his team’s second-in-command. Preston is played by Indonesian-American actor Peter Adrian Sudarso, who is the younger brother of Power Rangers Dino Charge star Yoshi Sudarso.

Galvanax is the main antagonist of Power Rangers Ninja Steel and the reigning champion and producer of intergalactic game show Galaxy Warriors who wants to claim the Ninja Nexus Prism from the Rangers. He’s voiced by franchise regular Richard Simpson who has voiced several other Power Rangers villains including Ultrog, Draknarok and Snapper.

Brazilian-born actress Chrsyti Ane plays Sarah Thompson, Power Rangers Ninja Steel’s resident Pink Ranger. An aspiring engineer, Sarah is the brains of the team and fits out her and her fellow Rangers’ suits with gadgets to help them fight their battles more efficiently.

Related: Power Rangers: Who Was The Original Gold Ranger?

Mick Kanic is a shape-shifting alien who was formerly enslaved aboard Galvanax’s ship but escapes to Earth with Brody and eventually becomes the Power Rangers Ninja Steel team’s mentor. If Mick looks familiar, that’s because he’s played by Power Rangers veteran Kelson Henderson who has appeared in 11 seasons of the show.