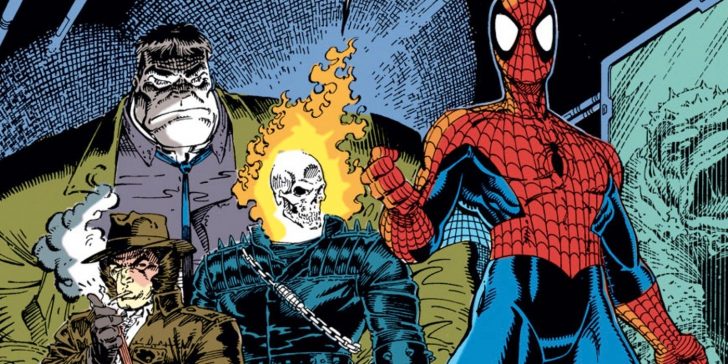 The Punisher could’ve been in the new Fantastic Four back in the day, only if Arthur Adams thought he was a good guy instead of a better villain.

What is now a famous replacement team for the Fantastic Four could have been much different with the Punisher included over the Hulk. This, of course, happened in the well-known issues Fantastic Four #s 347-349 by Walt Simonson and illustrated by Arthur Adams.

Fantastic Four #s 347-349 by Walt Simonson and illustrated by Arthur Adams sees Skrulls infiltrate the Baxter Building to abduct and impersonate the Fantastic Four. Wolverine, Ghost Rider, Spider-Man, and Hulk in his Joe Fixit form are brought in by a Skrull pretending to be the Invisible Woman to “avenge” her family against a series of Mole Man’s monsters. They called themselves the new Fantastic Four. Eventually, the real kidnapped Fantastic Four are released by their son Franklin and join the new Fantastic Four to defeat the bad guys. However, the story could have been much different.

In a video interview with Cartoonist Kayfabe, writer Walt Simonson explains the origins of how the unique team came together. He wanted to have a team-up of Marvel’s most popular heroes at the time. They were Ghost Rider, Spider-Man, Wolverine, and Punisher. However, artist Arthur Adams was not too keen on using the Punisher as a hero. He preferred it when Frank Castle was a villain instead. So the Punisher was ditched from the team and replaced by the Hulk, who Arthur Adams insisted be on a motorcycle.

The team wasn’t even supposed to be a replacement Fantastic Four. But Walt Simonson saw parallels between the two. He thought of the Hulk as being reciprocal to the Thing the same way Ghost Rider, with his flaming head, was reciprocal to the Human Torch. Also, as a man of science, Spider-Man can be viewed as a stand-in for Reed Richards. Though Walt Simonson does acknowledge the analogy breaks down when pitting Wolverine up against the Invisible Woman. Still, it was enough of a coincidence that they decided to use the group as a stand-in Fantastic Four for three issues.

Still feeling like the Punisher should get his due in the series, Walter included him in a very brief and hilarious cameo at the end of one of the third book. After the fighting is all over, the Punisher arrives in a helicopter. He then sees that all the fighting has ended and flies away. Walt Simonson thought this was a neat and funny way to include the Punisher in a meaningless cameo for no other reason than he was originally considered as a member of this odd Fantastic Four.

Next: Marvel Has Already Proved 3 Times That Punisher Can Work In The MCU

The New ‘Captain Marvel’ Could Be The Death of Carol Danvers