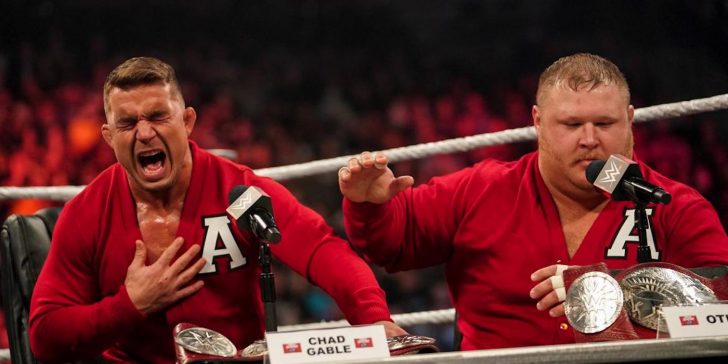 To the shock of anyone who lived through the year 2020, Chad Gable is, hands down, one of the best things Raw has going for it right now. He’s always been charismatic (that’s being a short king), but WWE has done their best to hinder his momentum (that’s also being a short king).

He started out in NXT’s early years as a tag team standout, alongside the greatly missed Jason Jordan. As someone with a mad love for tag teams who act like tag teams and not just two mildly successful singles stars, American Alpha had everything I wanted. Jordan was the powerhouse with incredible agility, while Gable was the technical mat wizard. And they had the tie-dyed singlets! Once things broke up because Jordan realized he was Kurt Angle’s bastard son — one of the greatest unrealized storylines in professional wrestling history — the company seemed at a loss for what to do with Gable.

He briefly teamed with Shelton Benjamin, which was fine , if uninspired, for both men. He made the occasional banger 205 Live appearance. And we had the unforgettable Shorty G Era, in all its ill-considered glory. While it’s hard to remember, the short people rights campaign was actually born from the newly returned King of the Ring tournament in 2019, when Gable lost to the man about to become King Corbin (he was not yet happy, destitute, or lucky). The short-haired Gable then embraced his inner DARE teacher and devoted his entire being to trying to make this gimmick work, which was already more effort than WWE ever afforded him. And while it decidedly did not land, Gable’s efforts shouldn’t go unnoticed. Shorty G delivered some top-notch matches during his run, including a brief stint against Sheamus that was elevated from its kickoff position just by the talent of both men. Leader of the Alpha Academy

But, once he stopped being short, Gable once again found a way to reinvent himself as the leader of the Alpha Academy. The talent previously known as Chad took Shorty G out back and shot him, rebuilding from the ground up as a serious technical performer. He recruited Otis to his school, making a monster out of the worm-dancing, turkey leg eating, Mandy Rose love interest. Otis even shaved as a result of Gable’s teachings, which was maybe his largest character development to date. It’s easy to forget, but the Alpha Academy was actually formed back in the fall of 2020 — it just took a little over a year for them to get anything to do.

As he likes to do, Gable put his all into every performance, even when he and Otis had about 30 seconds on TV. They feuded with the Mysterios on SmackDown for what felt like an eternity, before coming to Raw with this year’s draft. Gable started his whole shushing business, and the duo rocketed to the top this winter, winning the tag titles in a bit of a surprise result last month.

Taking the belts from RK-Bro was a welcome result (I’ve never seen the chemistry in that oddball pair, but maybe that’s just me.) It was a shocker, considering Alpha Academy hadn’t exactly been raking in the wins recently. They held zero tag wins over RK-Bro, or any other Raw tag team, for that matter. They’d earned the title shot through singles competition; which is fine enough, if a glaring damnation of the state of Raw’s tag division.

But I won’t look a gift horse in the mouth here, as the endgame is gold around Gable’s waist. Since winning the tag belts, Alpha Academy has engagined in a series of Academic Challenges against RK-Bro. Because if there’s one thing you want to see in wrestling, it’s WWE’s idea of a stoner gimmick participating in a spelling bee.

This brings us to this past Monday, somewhere around 9:30 pm, when Gable and Otis participated in an academic quiz bowl against RK-Bro. While the concept of Randy Orton participating in Quizzo is actually fantastic, the whole segment had a bit of a damper when you considered the ‘bro’ half of the equation. Things were tied up until Orton was able to correctly answer how many grams are in an ounce (get it? it’s a weed joke). Their victory in trivia earned them a wrestling opportunity, naturally, so we’ll probably get the two teams facing off again at Elimination Chamber. After we were all done learning fun history facts and watching Gable get destroyed by the sound of a buzzer, the Street Profits interrupted to challenge them to a match. These two teams had gone at it on SmackDown, although you’d be forgiven if you had zero memory of that. Ford took out Otis on the outside, but utilizing an Ankle Lock into a pin, Gable scored the win for the nerds of the world. He posed in front of a booing crowd with a mouthful of blood, and it was fantastic.

Not Just an Academic

This was a momentous occasion, as it marked Gable’s first pinfall victory on WWE TV in nearly two years. Two years ago was pre-Covid. Two years ago we didn’t even have the Beyond KFC meal. How far we’ve come, and how long Gable’s journey to relevancy has been. These Academic Challenge segments aren’t as cringe worthy as they could have been, but a lot of that is helped by how naturally charismatic Gable is. As the obnoxious heel, he’s found confidence in his voice, which allows him to play the mouthpiece for Otis. His face promos were fine enough, and the Shorty G thing worked with what he was given, but Alpha Academy’s 4.0 leader is actually something Gable can sink his teeth into. He’s helped by the fact that he looks like a murderous Ken doll when he gets in the ring, and Otis is the perfect beefy backup.

Anyway you slice it, Chad Gable has survived a lot in his decade with WWE. I may miss American Alpha with all my heart, but you can’t go back to 2013. Instead, Gable has found a way to continually adapt with what he’s handed, and that cream almost always rises at least to the mid-card. He and Otis have their routine down, and his growing confidence in playing off the disapproving crowd makes him something to look forward to every week. Raw is struggling to fill their 3 hours, but Gable is a performer who can take something like a spelling bee in a professional wrestling ring and play it like it’s the most important segment he’s ever been a part of. It took Alpha Academy took a while to find their footing, but now that Gable is on a letterman-wearing, scooter riding roll, I can’t wait to see where he goes next.