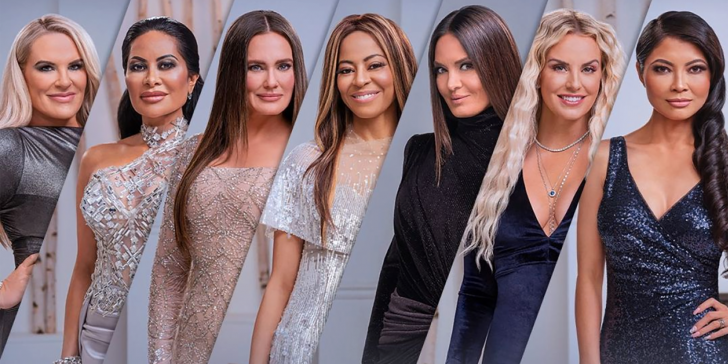 RHOSLC’s Lisa Barlow storms off set in a sneak peek of reunion when confronted about her expletive filled “hot mic” rant against Meredith.

The Real Housewives Of Salt Lake City is wrapping up an explosive second season and a sneak peak of the three-part finale has Lisa Barlow storming off the set in anger. Lisa, who indulged in a major, expletive-laden rant against bestie Meredith Marks during the group’s trip to Zion, has been on damage control since her meltdown was recorded and included in the show. Lisa and Meredith, who share a decade of friendship prior to coming on the show, have fallen on hard times lately, due to their mutual displeasure at current alliances. Lisa has been dismayed by Meredith’s close relationship with controversial (and now fired) co-star Mary Cosby and Meredith’s irritation over Lisa’s support of cast mate Jen Shah has struck her as a betrayal.

Though the women had been behaving somewhat amicably on the surface, things boiled over during the group vacation to Zion, when a furious Lisa repaired to her room and went off of Meredith. Now calling it a hot-mic moment, Lisa raged behind her closed door, “Meredith can go f*** herself, I’m done with her. I f****** hate her! She’s a w****. She’s f**** half of New York!” Needless to say, Meredith did not take kindly to the tirade and in an appearance on Watch What Happens Live, she told Andy Cohen, “This level of hate is far beyond anything I could have ever imagined,” and summed up Lisa’s behavior as “incomprehensible.”

In a sneak peek of the reunion episodes shared by E!, the women address several grievances (including those surrounding Jen Shah’s current legal drama), but the most explosive moment in the clip has a tearful Lisa announcing that, “I just feel like everybody here wants to break me all the time.” At some point she announces “I’m done” and goes to her trailer where she is heard off-screen chastising producers, “you guys knew what you were doing when you put that in there” regarding the broadcast of her blow-up.

Andy suggested to Lisa that her outburst “kind of seemed like some sort of truth dump for you,” and asked if she thinks that Meredith is indeed a w****. Lisa says no, but Meredith isn’t convinced and responds, “The venom and the hatred that the delivery came with was what resonated. I was sick.” The group gangs up on Lisa, which culminates with Jenn calling her a bitch. The acrimony between the women, even without lightening rod Mary Cosby chiming in, is off the charts.

Season 2 of The Real Housewives of Salt Lake City has ended with both Mary and Jennie being fired from the show. Mary’s exit was likely a result of her ditching the reunion to avoid questions about racist comments she made to Jennie, but in a strange twist, Jennie was also fired for her own racist social media posts. Jenn’s legal issues and the implosion of Meredith and Lisa’s relationship will no doubt continue in season 3 and viewers can’t wait to watch it all unfold.

Next: RHOSLC:  Mary Cosby Admits She Didn’t Want To Be ‘Beat Up’ At Reunion