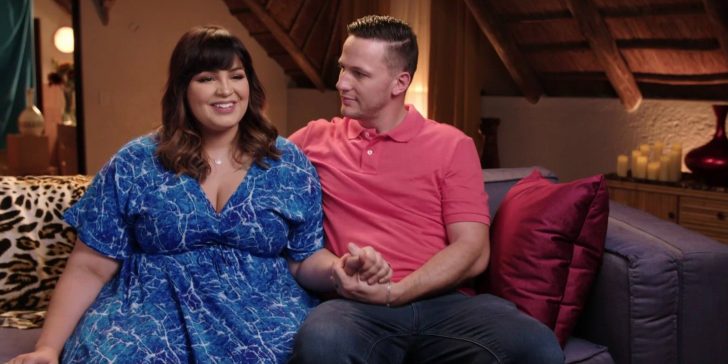 Ronald Smith’s conversation with a viewer suggests he may appear on a 90 Day Fiancé spinoff with his new English girlfriend, Lauren Fraser.

Ronald Smith may appear on a 90 Day Fiancé spin-off with his new girlfriend, Lauren Fraser. Viewers may remember Ronald from 90 Day Fiancé: The Other Way season 1, during which he appeared alongside his now estranged wife Tiffany Franco. The two had a troublesome relationship on the show, but eventually, they worked on their issues and tied the knot. Shortly after the wedding, the couple welcomed their first child. Their relationship was gradually getting back on track, but in 2021, they started having arguments on social media. Eventually, Ronald filed for divorce from his American wife.

Maryland native Tiffany started focusing on her physical and mental health, while Ronald began dating a new woman. Ronald has been publically open about his relationship with Lauren and has said the sweetest things about his new love. While viewers have been interested in knowing more about Lauren, her account is private. However, Ronald has answered some questions about her and revealed that she is English.

Related: 90 Day Fiancé: How The War Between Ronald & Tiffany Started

Now, some chat screenshots have surfaced online in which the former 90 Day Fiancé star has implied he wants to return to the show. Instagram account truecrime_jankie posted the screenshots, which show Ronald’s response to a casting call for 90 Day Fiancé UK. The first screenshot shows a viewer sharing the post with Ronald, as well as his humorous response. The next screenshot shows Ronald replying to a comment that asks him why he still uses the 90 Day Fiancé hashtag, to which he responded, “let me worry about that okay till then please be patient till u seee why #90dayfianceuk.”

The 90 Day Fiancé star has certainly hinted he may be interested in returning to the franchise, this time with Lauren. Since Ronald is a controversial cast member, the producers will have a much easier time continuing his storyline. As for viewers, they also think a spinoff with Ronald and Lauren is absolutely plausible, which is why they are leaving comments such as, “Didn’t this girl watch his season? And still decided to.. nevermind.. I’ll be watching.” Another chimed in, “Wow! He’ll be collecting international girlfriends.” One viewer felt extremely confused by Ronald’s current relationship status and wrote, “Isn’t Ronald like… married?”

Overall, reactions suggest there is still interest in seeing Ronald’s story on-screen. This makes sense since its true end is still pending, seeing how he and Tiffany broke up. Viewers will want to see how he has grown in the last few years. They would love to watch if Ronald will repeat the same immature behavior seen in the past or if he can become a responsible partner to Lauren. It will also be interesting to see if Tiffany will feature on the show in any capacity. 90 Day Fiancé viewers would enjoy seeing all of the drama unfold between Lauren and Ronald’s ex.

Next: 90 Day Fiancé: All The Ways That Ronald Smith Let Tiffany Franco Down