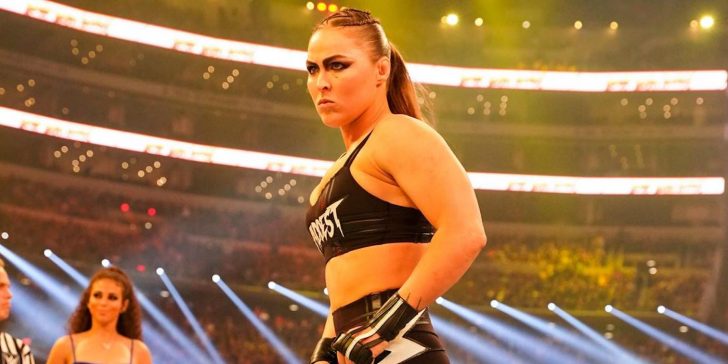 WrestleMania Saturday is in the books, and we all sat and watched what can best be described as an extremely mid effort in Ronda Rousey losing a SmackDown Women’s Championship match to Charlotte Flair. The match was pretty mediocre, so there isn’t anything incredible I can praise here, but there was something truly terrible, and it actually had nothing to do with Rousey’s in-ring skills. As always, the greatest tragedy was whatever her makeup artist did to her face.

Despite having her own makeup artist, she’s struggled to find a makeup style that doesn’t make it look like she’s already punched in the eye before the match. For whatever reason, Rousey’s go-to look is heavy (and I mean heavy) black lids, a dramatic cat eye that grows into a beautiful black swan, or a dead on impersonation of It’s Always Sunny’s Nightman. And while I appreciate a strong goth look, it just never doesn’t her features, nor does it mesh with her gear.

I think the kilt and leather jacket is actually one of the better things Ronda has going for her. While her gear is typically plain (note: she didn’t even spice it up for Mania), the attire she wears to the ring is a nice nod to the man she’s stealing her whole personality from, and it’s a unique enough look to make her stand out amongst the rest of the women’s division. But giving her dark eye after dark eye is just boring, plain and simple. There’s so much else she could play off of — a soft red for her usual color scheme, a significantly less severe but still intense cat eye, or just a natural look, if they really want to lean into her being all business and no charisma. If her gear told a story, we wouldn’t need to rely on the very small amount of space available on the upper half of her face to do the trick.

Alas, we do not yet live in a world where someone kindhearted does Ronda Rousey’s PPV makeup.

When she starts sweating and it smears around her eyes, she looks like Henry Cahill going Witcher mode, which would actually be a pretty cool gimmick if they wanted to capitalize on that.

I dug the black and white kilt she wore tonight, but again, you can’t just go monochromatic! Let her experience the miracle of color, I’m begging.
I gotta imagine this is hard to clean off. Not just for her and her nightly skin care routine, but for her opponent and for the mat itself. No wonder she and Charlotte helped close out the night; anyone else who wrestled after her would look like a young paperboy in 1926.
Remember when they gave Ronda that red highlight under her eyes? Like a young Victorian baby dying of consumption? It was actually slightly better than just panting a black half-moon over her face and calling it a day.
Not to agree with the decorative pillow you got from HomeGoods that suggests “the eyes are the window to the soul,” but those guys were on to something. The number one performance note is to make sure your eyes are visible, because otherwise everything else is going to get thrown away. If I can’t even see her eyes amidst this sea of dramatic intent, then her acting is going to come across even flatter than it actually is. And that’s already pretty flat.