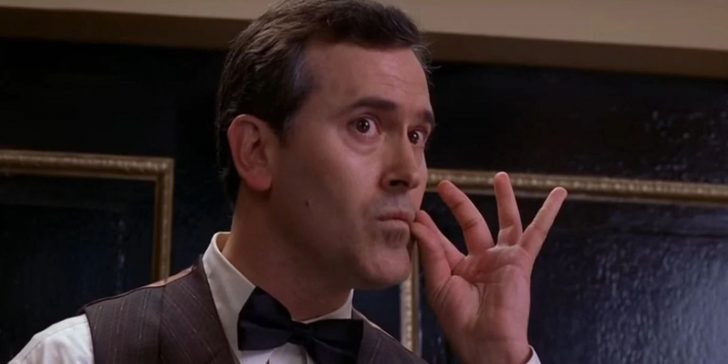 Sam Raimi finally confirms that one of the plans for Bruce Campbell’s Spider-Man 4 cameo was to have his frequent collaborator play Mysterio.

Sam Raimi finally confirms that one of the plans for Bruce Campbell’s Spider-Man 4 cameo was to have his frequent collaborator play Mysterio. Raimi and Campbell have been good friends going back to their high school year in which they made a number of short Super 8 movies together before heading to college at Western Michigan University and partnering for what would be the start of their careers, The Evil Dead.

As the horror franchise came to a close with 1992’s Army of Darkness, Campbell and Raimi would primarily reunite for cameos in a variety of the latter’s films as well as the TV shows Hercules: The Legendary Journeys and Xena: Warrior Princess. Following the critical success of Darkman, Raimi would finally get his hands on a proper superhero property with Spider-Man, building a trilogy starring Tobey Maguire in the titular role and bringing Campbell along for the ride with a fun cameo in each film. Despite their critical and commercial successes, Raimi’s Spider-Man tenure would come to a close after creative differences between him and the studio regarding plans for Spider-Man 4 and now the filmmaker is sharing one exciting tidbit from what didn’t come to be.

In a recent interview with Rolling Stone for his superhero return with Doctor Strange in the Multiverse of Madness, Sam Raimi reflected on his time with the Spider-Man trilogy. When asked about plans for his scrapped fourth film, namely Bruce Campbell’s cameo, Raimi confirmed one plan was to have his Evil Dead star appear as Mysterio while noting the creatives had other ideas in mind too. See what Raimi shared below:

“I miss the really great cameo we had designed for Bruce Campbell. [Mysterio] was one of the possibilities. We had other things in mind, too, but that was one of them.”

Campbell appeared in the first Spider-Man film as the underground wrestling announcer who gives Maguire’s hero his titular moniker while being seen in Spider-Man 2 as a theater usher who wouldn’t allow Peter Parker in to see MJ’s play after showing up late and Spider-Man 3 as a French maître d’ at the restaurant in which Peter plans to propose. While most saw Campbell’s cameos as a fun ode to his long-standing friendship with Raimi, some took to theorizing he could actually be Mysterio given his range of appearances within the trilogy. During Spider-Man 4’s development, Raimi himself had confirmed his interest in making Campbell a significant character in the film, with later-released concept art showing Mysterio as part of the roster of villains leading many to believe their theories had been confirmed.

Raimi’s new confirmation that Bruce Campbell was eyed for Mysterio in Spider-Man 4 marks an interesting change of tune from the filmmaker after the actor recently debunked the theories as “fan s–t”. While Campbell could be playing down the possibility in the hopes of one day coming back for a surprise appearance as the iconic villain, recently played by Jake Gyllenhaal in Spider-Man: Far From Home, it also seems likely he wasn’t sure if he could outright confirm his scrapped role. Only time will tell what Campbell and Raimi have in store for fans next when Doctor Strange in the Multiverse of Madness hits theaters on Friday.

More: Will Bruce Campbell Appear In Doctor Strange 2? (& Who He Could Play)