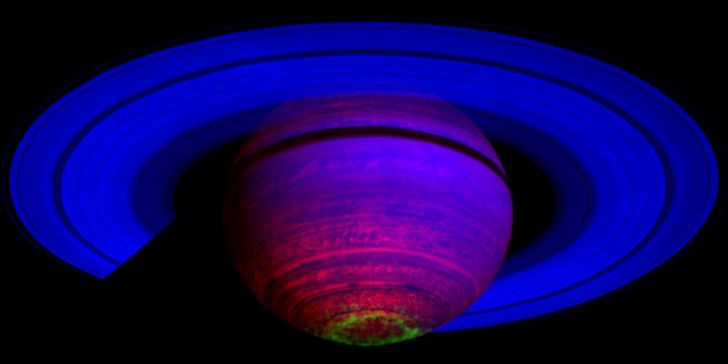 For the first time, scientists have observed that the winds gushing on Saturn are also responsible for creating the aurora seen on the planet.

Saturn is mainly known for its stunning rings and the super-fast winds that can attain speeds of over a thousand miles per hour, but space enthusiasts have discovered that these swirling winds are also responsible for the formation of stunning aurorae in its atmosphere. The first observation of the gas giant’s beautiful aurora was made in 1979 when the Pioneer 11 spacecraft noticed far-ultraviolet brightening on the planet’s poles. A few years later, the flyby missions of Voyager 1 and 2 provided a better description of how these cosmic light shows originate out of magnetic field disturbances.

The curtain-like auroras seen on Saturn are red at the bottom and purple at the top, while those seen on the Earth are green in the shade. The color difference can be attributed to the fact that energetic Nitrogen and Oxygen atoms form the building blocks of Earth’s polar aurora, while those on Saturn trace their origin to Hydrogen. Other factors like atmospheric density, the ratio of atomic and molecular constituents, and the energy of colliding electrons also affect the color. But so far, scientists have believed that Saturn’s auroras are produced due to interaction between Saturn’s magnetosphere and charged particles coming from the sun.

A team of scientists has observed — for the first time — that some portion of aurorae seen on the massive planet is created by the winds raging in its atmosphere, while the rest is produced due to Saturn’s magnetic field. Researchers made the observations at the W. M. Keck Observatory, which recently also contributed to the discovery of two mini-Neptune exoplanets losing their atmosphere to radiation from their star and are slowly turning into Super-Earths. The team relied on the Near-Infrared Spectrograph (NIRSPEC) at Keck to measure the changing flow of Saturn’s ionosphere for a month. The ionosphere is a layer of the atmosphere that contains energized charged particles and keeps changing its thickness based on the energy absorbed from the sun.

More Than Meets The Eye

When the team compared their Infrared dataset against the radio data generated by Saturn’s aurora, they noticed that a healthy portion of it was created by Saturn’s swirling weather courtesy of energy from the winds gushing through the ionosphere at speeds of up to three kilometers per second. The discovery, detailed in a paper published in the Geophysical Research Letters, marks the first time scientists have observed a planetary aurora driven by atmospheric winds and not solely due to the magnetic-electric tug of war with charged particles at the center.

Based on their findings, the team speculates that gas giants closer to their parent star will have an even stronger auroral current due to the higher amount of incident heat received from their star to drive currents much faster than those seen on Saturn. One example cited in the paper is a hot Jupiter named HD 189733b, located about 63 light-years away. This scorching hot planet has a daytime temperature of nearly 2,000 degrees Fahrenheit, and it possibly rains glass shards sideways owing to the winds that are said to move at 5,400 miles per hour. Saturn’s unique model of aurora generation might also explain the inexplicable detection of aurora signals from a Super-Earth called GJ 1151b.

Next: What Is Saturn Made Of?