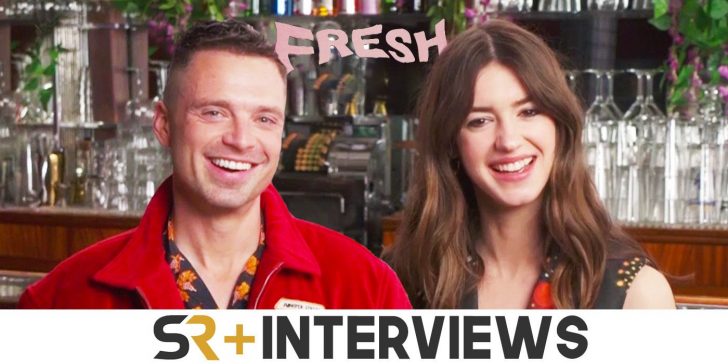 We interview Fresh stars Sebastian Stan and Daisy Edgar-Jones about preparing for their roles in Hulu’s new movie, the musical numbers, and more.

In the movie Fresh (now streaming on Hulu), Daisy Edgar-Jones stars as Noa, a disillusioned young woman who has grown tired of the dating app scene and going on a series of bad dates. Her luck seemingly changes when she meets Steve (Sebastian Stan) at the grocery store, and the two start a relationship. On the surface, Steve seems like the sweet and normal guy Noa has always dreamed of, but she eventually finds out some disturbing truths about her new lover.

Screen Rant interviewed Stan and Edgar-Jones to discuss their preparation for their roles, taking part in the movie’s music and dance numbers, and much more.

Screen Rant: I was literally saying last night, just go into it fresh, pun intended. But I just had such a good time. There are so many different vibes blending together. I have to say the music and the dance numbers really put a smile on my face. How much choreography was involved there?

Sebastian Stan: It started out from no choreography to very choreographic because our first dance in the movie was very improvised. It was just us bringing our goods to the table and what you see was what you get there, but for the rest of the film, it’s definitely different. What are your thoughts Daisy?

Daisy Edgar-Jones: I’m really glad you liked it. I think that was our second day filming together so the awkward embarrassing dancing actually mean Sebastian being mean. Sebastian, I think you’re very good at the shoulders. I do the head thrusts all that stuff.

Sebastian, how does one prepare for a role like this? You really just get to go crazy in this. I loved watching you in this movie.

Sebastian Stan: I appreciate it. I think part of that was just the pandemic of the holidays. I had November and December where nothing was going on. COVID was sky-high yet again, and I just watched a lot of YouTube, a lot of true documentaries, and I was doing research on serial killers and there’s so much out there to unpack. Putting this thing together, when I got to Canada, it just became about our rehearsals and talking about the movie and the script with Mimi and finding this arc that the two of them have from the beginning of the film to the end.

Daisy for you, what was the most daunting or perhaps thrilling thing about taking on a role like this?

Daisy Edgar-Jones: I think I was very daunted initially actually by the accent. I’d not done that before and I wanted to get it right. I think the comedy aspects of the script are so informed by it. So I wanted to get that right. I was daunted about making sure that I grounded the moments of abject terror in as much truth as possible, and made sure the relationship was as grounded, and all of those bits to earn the journey that the script then goes on, it was important. There were two main scenes I can think of that are connecting between all the acts, because I feel like the film is in three acts and it was important to get those two scenes right in order to earn the latter half of the film.

Next: Watch the Fresh Trailer

Fresh is now streaming on Hulu.

Ash Crossan is a Lead Content Producer & Host for Screen Rant. With nearly a decade of experience under her belt, Ash joined Screen Rant in 2021 as a lead interviewer. Based in Los Angeles, Ash is a fan of all things Star Wars, Marvel, DC, 90s Nickelodeon and rom-coms. Follow Ash on Twitter: @AshCrossan.