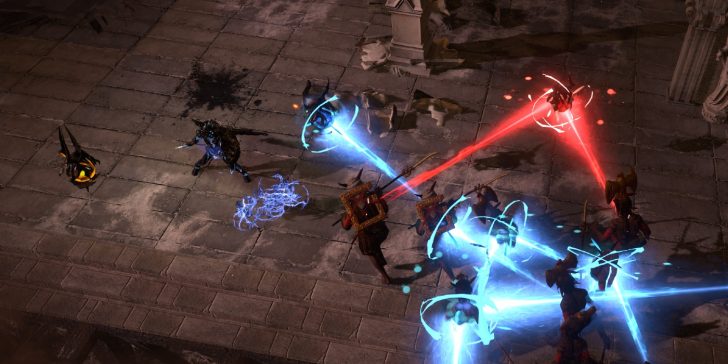 It’s been a few months since the release of Siege of the Atlas, and Path of Exile is debuting another season soon. Path of the Exile: Sentinel  — which is releasing on PC and Mac on May 13, followed by Xbox and PlayStation releases on May 18 — isn’t as big as the previous expansion. Instead, the content update aims to refine and expand some of the late game changes from Siege of the Atlas, as well as introduce us to a new challenge league.

During an early reveal of Path of Exile: Sentinel, producer and developer Chris Wilson talked about who these Sentinels are, and how they’re shaking up the free-to-play ARPG. In essence, the key premise of the challenge league (PoE‘s fancy name for seasons) is to find and deploy the so-called Sentinels. Once deployed, these little guys are going to follow you around for a specific amount of time and shoot at enemies. Sadly, they don’t act as companions, but instead empower the enemies they target.

There are three kinds of Sentinels. Stalker Sentinels follow your character for around 30 seconds, empowering the foes you’re fighting. Pandemonium Sentinels typically fire just one shot, but the effect is chained based on your surrounding area. As such, if your screen is filled with enemies, that single shot can empower all of them at once. Lastly, Apex Sentinels can only empower rare or unique enemies and fire fewer shots.

I was a little disappointed to hear that the Sentinels aren’t exactly a friendly companion that tags along. It’s been a couple of years, but I still remember my times playing a Hunter in World of Warcraft fondly, going out on adventures with a pet by my side. Playing as a Necromancer in Diablo II was always a joy for this same reason, as I always showed up to every room with an army of skeletons and one big golem leading the march. It’s perhaps Torchlight I remember the most, specifically the Alchemist, who had all sorts of little companions that made grinding a single player ARPG a lot less lonely. All three Sentinels in all their glory.

But while I fight the urge to download Torchlight for the eleventh time, there is still a lot more ground to cover. As expected, Path of Exile: Sentinel isn’t going to introduce a new feature to the game without many intertwining mechanics to learn and experiment with. You only start with one Stalker Sentinel slot, but you’ll unlock two more as you progress for a total of three, one for each Sentinel type. Sentinels can be used once per area, but aren’t unlimited — after a few deployments, they’re going to deplete their internal power supply. Thankfully, you can combine these husks with a Power Core to craft a new, functioning Sentinel that has the properties of both husks you use. It’s an interesting prospect. Perhaps not so much for inventory space, but still cool.

Wait, there’s more. You can find Sentinels that have mods attached to them by default, and that’s before you go ahead and combine them with others during crafting. But if this doesn’t sound like enough customization, there is a massive runic circuit board called the Sentinel Controller (which reminds me of that puzzle minigame in Bioshock) where you can select and switch between nodes for all three Sentinel types.

The ceiling for this new mechanic is quite high and sets a promising ground to experiment and lose yourself into yet another skill tree, although I appreciate the consideration of naming it differently. The possibilities of crafting, paired with the strategy of timing Sentinel deployments during runs and the existence of Unique types that can’t be recharged nor repurposed (making them fairly rare), are quite exciting. If you’re someone who has spent a long time in the endgame, Path of Exile: Sentinel brings some substantial additions. First off, there are 20 new keystone passives being added to the Atlas tree, which allow you to customize which maps you want to see more often, and the benefits of running them as opposed to others. But for those looking for an even greater challenge, you can expect uber versions of seven pinnacle boss fights, which are accessed via six new keystone passives. These boss encounters are Venarius, Sirus, The Maven, The Searing Exarch, The Eater of Worlds and The Shaper, and The Uber Elder.

There are tons of other small tweaks involved, from the rebalanced influenced altar in maps that include more rewards but far more punishing downsides, as well as an array of unique items to discover. Getting to see all of this may take a while, though. Unless you’re really interested in the endgame and you’re already an avid PoE player, some of these changes may not affect your experience at all. But hey, at the very least this new league won’t bring any changes to the classes, so you can use the same build from the past season if you want to. Examples of the kinds of Sentinel variants you can encounter.

Alongside a number of quality of life improvements that developer Grinding Gear Games is sharing closer to release, one other aspect seeing tweaks is the challenge system. While it has remained the same for the last 21 leagues, the idea is to retain the model of 40 challenges with rewards that unlock as you progress through them, but with a focus on the endgame.

Up until now, you always had to reach a certain number of completed challenges to unlock a reward, which could take a while. Now, the first reward unlocks after only six of the easier challenges, and the second at 12. Whereas before you would need 24 challenges to see the second reward. As a result, there are more incentives to pursue, including two complete armor sets with a pair of wings each. But the later tasks are tougher than before.

The Archnemesis league provided support for controllers on PC with an open beta. After gathering feedback, official support is arriving in Path of Exile: Sentinel, so you can use any controller you want for that console feel. As such, this also makes PoE compatible with Steam Deck, which makes for great timing in case you have one.

It’s been a while since I jumped into the game, but Sentinel seems to be the perfect middle ground that can cater to both newcomers and veterans who are going to get to the endgame on the first weekend, if not the first day of the league itself. If you’ve never played PoE before, it’s definitely worth the try at the start of a challenge league as everyone has to start from scratch. But if you’d rather wait until the next season, that’s fine too. The experience won’t be getting any smaller anytime soon.