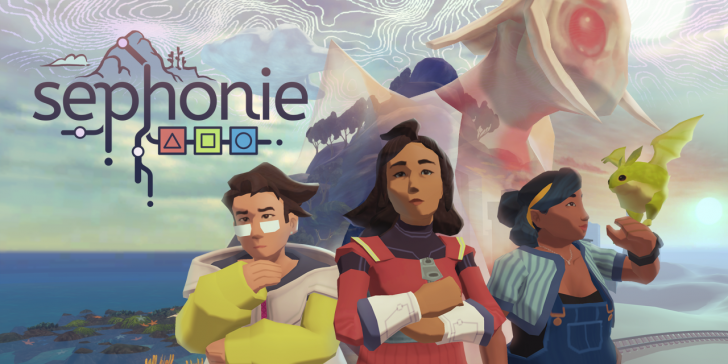 On my mission to research and document Sephonie‘s unknown wildlife, I constantly adapt to navigate its ever-evolving world. In the depths of a cavern, I wallrun and bounce off various fauna and flora as I descend into the unstudied, unnerving subterranean habitats. I was worried traversing this isle would be isolating, but Sephonie is synergetic from the very beginning. Dusty lime green fruit bats named “Ribbats” swing me across pitfalls with their tongues, purple fungi protruding out of the wall replenish my dash for easy climbing, and colossal, floating dandelions lend their parachutes to me so I can glide past obstacles. When I reach the bottom of the cavern, I see a spelunking cattle named “Isle Auroch,” and link with it. My digital ONYX system tells me this species loves to lick salt and minerals, and that the first of their kind made a home in these caves long ago.

Loving mechanics are baked into all parts of Sephonie, and you need to understand and appreciate the ecological community to make progress. It’s a beautiful sentiment that is remarkably relevant when our planet is actively dying, scientists and environmentalists are protesting and getting arrested, and the world’s governments and big businesses do not care.

Sephonie is an optimistic glimpse into a world where humans are respectful towards all types of life; where we favor communication over corporations. It utilizes floaty parkour, amusing color-matching puzzles, and poetic memory collages to peek into an alternate, miraculous future where humanity answers the planet’s cries urgently, with enthusiasm, instead of apathy.

The two-person development team of Melos Han-Tani and Marina Kittaka (Anodyne 2, Even the Ocean) created 3D puzzle platformer Sephonie over the past three years. In it, you embody scientists Riyou, Amy, and Ing-wen who find themselves stranded on the island Sephonie. Originally their research subject, the isle has a deeper than expected connection to the three biologists and compels them to unravel its emotional and scientific secrets while they wait for rescue.

It took me about 20 minutes of reading tutorials and practicing to get a grasp of Sephonie‘s carbonated controls, but when they click, they click. You start feeling like a superpowered scientist as you traverse the lush environments. You can switch between the three biologists at any time while you’re spelunking, the only difference is in aesthetic. Your initial movement options include sprinting, jumping, dashing, and wallrunning, which is a nice starting lineup. But fairly early on in the caves you discover that Sephonie’s wildlife augments these abilities frequently, which encourages players to stay on their toes instead of slipping into a cozy autopilot. The environments also get very eccentric the deeper you go, which gives shades of Psychonauts’ emotional platforming, where minds and memories are actually a physical setting for you to jump around in.

The creature designs are fantastical, yet palpable: underground moths that drink tears, mushroom-like worms that shackle together for life, a dual pitcher carnivorous plant with one lobe full of water and the other digestive enzymes. When you approach creatures and plants, you have the option to use your ONYX device to link with them, and further understand their history. This linking takes the form of a Tetris-like color matching game with a bunch of modern twists. I don’t usually find myself playing puzzle games with mechanics like this, but the lack of a timer combined with the soundtrack’s ambient pulse had me enchanted as I fiercely tried to crack the code.

There are a couple steep learning curves, but I’m consistently impressed with how arduous and elaborate the platform elements are. When I was playing last night, an area had me stumped for a minute until I eventually tilted the camera and found the solution. The HUD is very minimal, and there aren’t any hints for puzzles, so it hits the spot when you get past a particularly tough passage on your own. Luckily these challenges are also mitigated by optional easy modes: an infinite jump and dash mode can be toggled on if you don’t want the hassle.

Ing-wen, Riyou, and Amy are all compassionate in their own ways. While they explore the planet, they simultaneously explore themselves, shuffling through misplaced memories and unexamined emotions whenever they take a rest. These come to fruition in the form of ONYX Mindshares, which are montages of the scientist crew’s collective memories. Mindshares are a mesh of fragmented feelings, real world history about Taiwan, China, America, and Japan, and flashbacks from Sephonie itself. These dreamlike sections are exceptionally written and evocative. Weaving a sensitive narrative like this within wallrunning and puzzles is a spectacular feat.

Sephonie‘s opening moments have you gathering coral samples, and once you collect them, Ing-wen delivers a touching monologue. It catches you off guard – the game bellows such powerful words off the top. But it’s incredibly effective. This writing hit me hard because my family is from the islands, and I’ve always felt an inseverable love for the ocean. Sephonie stirs up feelings of home, untold adventures, and genuine tenderness for the places we pass by. I can’t recommend it enough.