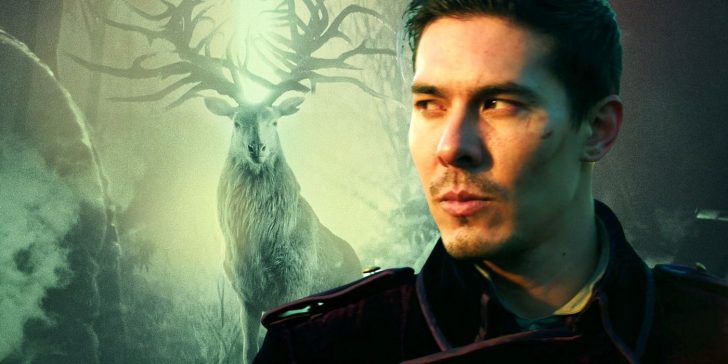 Lewis Tan says season 2 of Shadow & Bone, the Netflix TV series adaptation of Leigh Bardugo’s novels, will be an insane followup to the opening season. The actor will join the original cast along with several other new cast members, expanding the narrative scope of the Netflix adaptation. Since the series has taken clever turns to blend two of Bardugo’s novel narratives into one new adaptation, it’s unclear exactly how all the new characters will collide or what the plot has in store.

Tan will be playing Tolya Yul-Bataar in the upcoming season. Tolya is a Grisha Heartrender who, along with his twin sister Tamar (Anna Leong Brophy), has sworn allegiance to the main character Alina Starkov (Jessie Mei-Li) due to her seemingly divine ability to manipulate light. The novels follow Alina closely as she flees the powerful forces of the Darkling (Ben Barnes), protected by her self-appointed body guards Tolya and Tamar, who not only wield heart-stopping magic, but also sharp blades and a lifetime of fighting skills. Season 2 will likely be diving into the siblings’ shared Shu Han ancestry with Alina and displaying their formidable powers as they defend her from a long list of existential threats.

In an interview with Film Updates, Tan talked about why he’s so excited to join for the new season. He’s clearly a fan of Bardugo’s Grishaverse, and he explained what drew him to the Netflix series adaptation. He listed incredible writing and visual effects among the show’s long list of strengths. Read his full quote below:

“It’s just incredible … I met Scott Standley Leigh Bardugo a few days ago. She’s awesome … It was really cool to be a part of it. I really love what they did with season one. I thought the production design, the VFX, and the writing were really, really, really well done, so I’m excited to try something new, a different genre for me, kind of … Season two is going to be insane … I’m really excited and the cast is really nice. They’ve been very welcoming. I’ve been [in Hungary] for two months now, and we’ve been working really hard.”

Tan recently starred in the HBO reboot of Mortal Kombat and also leads the newly released Netflix movie, Fistful of Vengeance, the followup to 2019 series, Wu Assassins. With the Mortal Kombat sequel still in writing, Tan will probably spend the next months with his new Shadow & Bone co-stars, focused on doing justice to Tolya Yul-Bataar in all of his blade-wielding glory. Tan mentioned excitement for working with Brophy on bringing the deadly Bataar twins to life on the screen. Given that the twins are both Grisha Heartrenders in the novels, they have an inherent, unspoken connection through their powers that Tan and Brophy will have to recreate in subtle ways. Tan showed his eagerness to take on that challenge.

The Grishaverse trilogy and the Six of Crows duology that Leigh Bardugo wrote has still been mostly unexplored by the Netflix adaptation. Season 1 of Shadow & Bone took its time on the narrative pace, focusing more on Alina’s origin story and catching audiences up to the end of book one in the Grishaverse trilogy. Season 1 also explored the beginning of the first book in the Six of Crows duology, following the razor sharp Ketterdam criminal Kaz Breker and his Crows, a team of assassins and thieves. Throughout season 1 of the Netflix adaptation, Kaz and Alina’s storylines became blended as the Crows found their ticket to freedom by capturing Alina for ransom. As Netflix’s Shadow & Bone season 1 ended, the newly modified plot arc resolved itself, Alina and Kaz becoming loose allies. That ending left great potential for season 2 to explore the literary universe’s more exciting plot points, including the Crows’ Fjerdan Ice Court heist and the big identity reveal behind revolutionary pirate, Sturmhond (Patrick Gibson).

More: How Shadow & Bone Can Pull Off A Major Book Twist In Season 2

Why Uncharted’s Reviews Are So Terrible

Scott Standley is a writer and musician from Austin, TX. He previously wrote for Chicago Magazine print and online. He lives on the Olympic Peninsula with his wife, most days spent recording music and wrangling a small yet spicy tortoiseshell chonk.