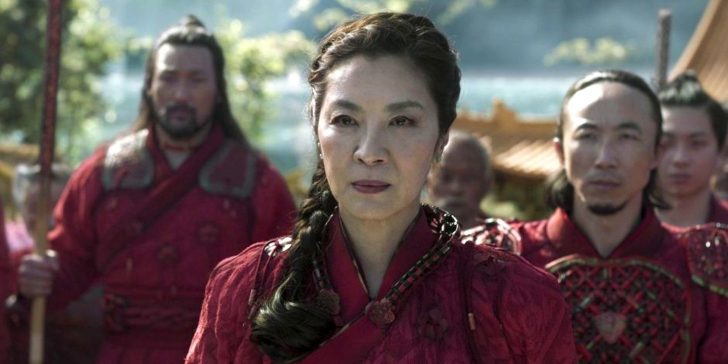 Shang-Chi and Everything Everywhere All At Once star, Michelle Yeoh, reveals the movie that greatly inspired her remarkable film career.

Shang-Chi and the Legend of the Ten Rings star, Michelle Yeoh, has revealed the movie that greatly inspired her remarkable film career. The famed Hong Kong action star has had a long memorable career that shows no signs of slowing anytime soon. She can soon be seen in the upcoming film, Everything Everywhere All At Once, a sci-fi action thriller about Evelyn Wang (Yeoh), who discovers that she has the ability to tap into the memories and skills of different versions of herself from alternate realities. The highly anticipated film recently premiered at the SXSW film festival and will be released in theaters on March 25.

Born in Malaysia in 1962, Yeoh started her career in dance and beauty pageants before switching over to film in the mid-1980s. Although Yeoh never received any formal martial arts training, she became known for her work as an action star in Hong Kong martial arts films, such as The Heroic Trio, Butterfly and Sword, and Tai Chi Master, a film in which she played opposite Kung Fu great, Jet Li. She soon gained the attention of Hollywood and was cast as a “Bond Girl” in Pierce Brosnan’s second outing as the secret agent James Bond in Tomorrow Never Dies. From then on, she secured roles in such hits as Crouching Tiger, Hidden Dragon, Memoirs of a Geisha, and the Marvel smash hit, Shang-Chi and the Legend of the Ten Rings.

Related: Michelle Yeoh’s Planned Return For Die Another Day Explained (& Why She Left)

In a recent Deadline video series, Yeoh reveals a film that greatly influenced her to start a career in acting. She explains that she has always had a love for the movies, ever since she was a kid where she visited the cinema in Malaysia on outings with the family. She would get lost in grand sweeping musical tales like The Wizard of Oz and The Sound of Music, but at that time, she never thought she would ever grace the silver screen herself. After she moved to England to study, she remembers one film that pulled at her emotions like no film had ever done before. Yeoh explains that this movie was The Champ (1979) starring Jon Voight as a boxer past his prime who attempts to reignite the love with his ex-wife and support his son by getting back in the ring again. Read what Yeoh had to say below:

“The movies that really stuck to me was one particular movie called The Champ. I still remember having this huge poster on my wall. And Faye Dunaway, and Jon Voight, Ricky Schroder when he was a little boy. And I think that was the first movie I remember sobbing my heart out. That emotion was so powerful, and I didn’t understand how, but it resonated so deeply that watching something on the silver screen was so powerful to make you have such complicated feelings.”

Yeoh also cites popular Hong Kong martial arts films of the time as a great influence, adding that she and her friends would to go to Leicester Square in London and watch midnight screenings of the Drunken Master, a martial arts film that served as one of the first major film successes for legendary actor and martial artist Jackie Chan, who Yeoh would later star with in Police Story 3: Super Cop. The film was also directed by the great Yuen Woo Ping, a future frequent collaborator of Yeoh’s. The actor reminisces of those moments with her Chinese friends explaining that, “even though I was so far from home, I can be still so close.”

Although Yeoh’s career is nowhere near its end, her legacy has certainly been cemented. Not many Hong Kong and East Asian actors have so successfully crossed over into mainstream Hollywood like Yeoh. With a short list consisting of greats like Chow-Yun Fat, Donnie Yen, and Jackie Chan, her success only grows in significance as one comes to realize that she is only one of the few female actors to accomplish such a feat. Michelle Yeoh has earned a place as one of the world’s elite actors on both the big screen and the small — with her roles on television shows like Star Trek: Discovery and the upcoming The Witcher: Blood Origin prequel series — and will continue to inspire audiences for years to come.

Next: Police Story: The Stunt That Almost Killed Jackie Chan