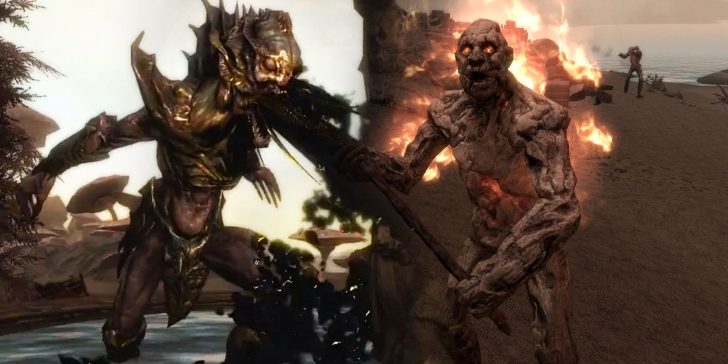 The world of Skyrim is populated with dozens of different enemy types for players to encounter, but which are the scariest, most horror-movie-style monsters in the game? While the ambiance of Skyrim’s environments certainly lends itself to horror-like elements at times, the design of the game’s enemies adds to that element of Skyrim more often than not. Plenty of memorable moments in Skyrim seem tailored to invoke fear in the player, whether it’s the sudden animation of a seemingly-inactive Dwarven Centurion or the unexpected descent of a giant spider from the ceiling of a cave. So which of the enemies in Skyrim are the most horrifying to encounter?

Skyrim is by no means the first Elder Scrolls game to have genuinely creepy content. Plenty of monsters and other characters from Morrowind and Oblivion, or even earlier Elder Scrolls titles such as Arena, still stick out in players’ memories for their terrifying design. The Ash Vampires in Morrowind are one such example, or the not-quite-human Ghosts found across Cyrodiil in Oblivion. Skyrim, being the most recent mainline Elder Scrolls game, benefits from significant graphical improvement over its predecessors when it comes to the horror factor. However, The Elder Scrolls 6 is likely to surpass it significantly in the realm of realistic character models, and consequently, memorably disturbing encounters.

Though many enemies are consistent across the series, like staples such as Skeletons and Trolls, others are more dependent on the specific setting of the game. The Falmer, one of the more mysterious elven races in The Elder Scrolls, are excellent examples of enemies that first appeared exclusively in Skyrim, and it’s probable that The Elder Scrolls 6 will similarly have exclusive creatures to fight. This is even more likely depending on the setting of the game. Though little is known about either the story or location of Elder Scrolls 6, especially given how early into development it is, it hasn’t stopped Bethesda fans from speculating about everything from which iconic characters from Skyrim might be returning to what new and horrifying monsters are liable to be encountered.

The Dwemer and the ruined remains of their civilization have played an essential role in nearly every mainline Elder Scrolls game, and Skyrim is no exception. Numerous Dwemer ruins can be found lying around for the Dragonborn to encounter, each of them varying in size and chock-full of both valuable loot and fearsome foes. The mechanical automatons that guard these ruins are perhaps the most notable of these enemies. Their oftentimes-abrupt appearance and loud steam-powered movements can make a stressful encounter out of even the smallest Dwemer Animunculi. The largest among them, the Dwarven Centurion, couple heavy armor with powerful attacks and can take the Dragonborn and their companions out easily if caught off-guard.

Dwemer ruins are often home to the Falmer, as well. Forced into submission by the Dwemer, the Falmer gradually adapted to a subterranean lifestyle in the deepest dungeons in Skyrim. What makes the Falmer so unsettling isn’t just their appearance – which would already make them one of Skyrim’s scarier enemies, as it mimics that of other Mer just close enough to make their almost-unrecognizable facial features that much more terrifying to look at – but also the knowledge of their history. An ancient Snow Elf, the ancestors of the Falmer, can even be encountered and talked to in Skyrim, enabling the player to see just how far the Falmer have fallen into madness thanks to the influence of the Dwemer.

Skyrim’s Most Horrifying Enemies Are All Giant Bugs

Where there are Falmer, there’s also likely to be Chaurus, which appear similar to giant, venomous centipedes. If their clicking and chattering noises aren’t scary enough, their prowess in both ranged and melee combat make them one of Skyrim’s most dangerous animals. Although they’re much stronger than some of the other giant insect enemies in Skyrim, namely Frostbite Spiders, they’re also (fortunately) rarer to encounter as well. Players are unlikely to stumble upon them at all unless they’re venturing into caves or ruins inhabited by the Falmer. Giant spiders, on the other hand, can be found outdoors just as commonly as they can be spotted in caves or lurking on ceilings.

Each of Skyrim’s DLC helps to expand the game by adding in new locations, quests, mechanics, and characters. Several also add in new creatures to fight, though, and the Dragonborn DLC is perhaps the best example of this. The region of Solstheim in Skyrim’s Dragonborn expansion has tragic and intimidating enemies to go up against in battle, some of which were brought over from older Elder Scrolls games and others which were developed exclusively for the Skyrim expansion. The Ash Spawn, though similar to many of the ash creatures that can be found in Morrowind, are a good example of a horrifying enemy crafted just for exploration across the Dragonborn DLC. Their shambling forms are just humanoid enough to be unsettling.

Related: Elder Scrolls 6 Can Feature More Of The Series’ Most Overlooked Daedra

There are also quite a few new Daedra to be encountered in the Dragonborn expansion, too, most prominently the Seekers and Lurkers. Both of these creatures are heavily based around the Lovecraftian horror of Hermaeus Mora’s realm of Oblivion. Seekers appear to be made primarily out of tentacles, and their ability to periodically turn invisible can make fighting against them a terrifying experience. Lurkers, on the other hand, are towering creatures that boast powerful melee attacks that share many qualities to those of Giants, one of the more powerful creatures in Skyrim. Regardless of the Dragonborn’s level, there are bound to be difficult challenges to take on in Solstheim.

Dawnguard is another expansion that introduces significant new content to Skyrim, including multiple enemies to take on. On top of overhauling the game’s vampires significantly, Dawnguard also added a few other creepy creatures for the Dragonborn to take down. Gargoyles made an appearance for the first time since the early Elder Scrolls game Daggerfall, and if their impressive frame wasn’t imposing enough, the fact that they can blend in as a regular statue just to jump out at players as they pass by is likely enough to frighten even those who are experienced with the DLC. Other terrifying encounters include the Keepers, beings found in the Soul Cairn whose heads appear as glowing eyes set without a cloud of black smoke, and the floating legless skeletons known as Mistmen.

Hagravens Are Some Of Skyrim’s Most Unsettling Enemies

Despite all of the unusual creature designs in Skyrim, some of the scariest enemies are those that appear alarmingly human. Perhaps that’s why some Elder Scrolls players find even the common, low-level Draugr located throughout Skyrim frightening, or the incorporeal Wispmothers. Many fans would argue, however, that Hagravens are the most horrifying of the nearly-human beasts of Skyrim. Whether it’s because of their significant prowess in battle or the fact they look akin to a grotesque fusion of a human and a bird of some kind, Hagravens can be some of the most intimidating enemies to encounter. Fortunately, they aren’t all that common to run into, meaning at the very least Skyrim players don’t have to worry about facing their fears on a regular basis. That said, there are plenty of other creepy enemies to encounter, so it’s always wise for the Dragonborn to keep their guard up while exploring Skyrim’s vast map.

Next: Worst Skyrim NPCs The Dragonborn Can Kill

Ky Shinkle is a Senior Gaming Features Writer for Screen Rant as well as an overall avid gamer and writer. Her prior experience is primarily that of a narrative designer for video games, although her writing has covered all formats from screenplays and novels to stage scripts. A graduate of the Savannah College of Art and Design, when she isn’t writing she works on digital media projects and other types of fiction writing. Ky currently works out of Ohio and enjoys spending her free time either playing RPGs or running with her dog.