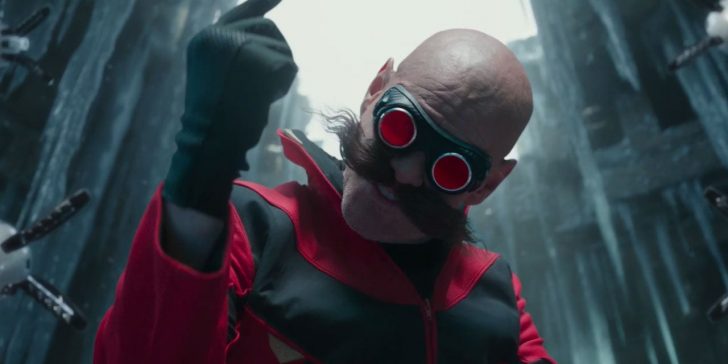 The following article contains spoilers for Sonic the Hedgehog 2.

In my day, I’ve seen many a Marvel Cinematic Universe film. I’ve sat in an audience of dedicated comic book fans waiting for the post-credits scene that would tease what movie was coming next. In a lot of cases, we have inklings of what’s coming next for Marvel’s interconnected films since Disney announces a roadmap for those years in advance. So even without being more informed on comic book backstories, I don’t often find these scenes to be surprising. But I know they’re still exciting for folks who are invested, so I will forgive a superfan a hoot and a holler as some character I don’t know appears on the screen after the credits. But when I saw Sonic the Hedgehog 2 this week, I had my first in-theater pop-off about a post-credits scene. Because while we knew a third live-action Sonic the Hedgehog movie is in the works, we knew nothing about what it would entail. At the last minute of Sonic the Hedgehog 2, I let loose a “let’s go” alongside a theater full of strangers as I finally saw a character I very much know and love.

It turns out that my motherfuckin’ boy Shadow the Hedgehog is gonna be in Sonic the Hedgehog 3. The antihero debuted in Sonic Adventure 2 as a rival character to the titular blue blur, and based on the way he’s framed in the movie’s post-credits scene, it seems he’ll also play an antagonistic role in the third movie.

Despite Shadow being in cryostasis for the majority of Sonic the Hedgehog 2, his lingering threat has existed since the first movie when Commander Walters alluded to wiping Eggman’s existence from government records. And it turns out that is what leads to the discovery of Shadow, as some newly found coordinates point to a facility where the black-and-red hedgehog is waiting in sleep. For those privy to Sonic the Hedgehog lore, the gaps are easy to fill, as Shadow was created by Doctor Gerald Robotnik⁠, Eggman’s grandfather, in the games. The final scene of Sonic the Hedgehog 2 shows Shadow being woken up, with the final shot lingering on his red eyes.

In the Sonic video games, Eggman waking up Shadow prompts the two to become partners in doing dastardly deeds. From this shot it’s unclear if that will be the case in the next movie since Eggman is presumed to be dead. However, his body is never shown, so he could easily return. It’s worth considering that Eggman’s actor, Jim Carrey, said he’s considering retiring from acting just last week. So as much as I’ve enjoyed his performance as Eggman, speculation should assume Eggman won’t be the primary villain of the third film⁠ — at least for now.

With all that being said, Shadow’s foreboding presence in the post-credits seems like he’s ready to step into a major antagonistic role in the next movie. And among the rivals and villains of the Sonic universe, he’s among the most equipped to be a headlining force. He’s equal to Sonic in speed and strength, and is broody enough to sell a villain more interested in destroying the world than enslaving it.

That’s Shadow’s original deal in the video games. Where Eggman wants to rule the world, Shadow is more interested in a planet-wide destruction as an act of revenge. In the games, Shadow’s only friend was Maria Robotnik, Gerald’s granddaughter and a casualty in a raid committed by GUN on their home. This was 50 years prior to Sonic Adventure 2’s main story, and Shadow had revenge on his mind as he went into a suspended state for several decades. While the movies have taken some liberties with character backstory, you can still see some intact throughlines in characters like Idris Elba’s Knuckles, who has a connection to the Master Emerald in both continuities. It would be surprising if Maria didn’t play into Shadow’s story in Sonic the Hedgehog 3, especially since searching for information on Robotnik is what has led to his rediscovery.

The specifics are still hazy, but I’m still riding the high of seeing my favorite character finally debut in the Sonic film universe. I’m just wondering who will voice him since the Sonic movies have been inconsistent about their voice casting. Ben Schwartz plays the blue blur instead of his video game actor, Roger Craig Smith, while Colleen O’Shaughnessey plays his sidekick, Miles “Tails” Prower, in both the movies and the games. So even though Kirk Thornton, who plays Shadow in the games, isn’t off the table, a big celebrity casting seems likely. I’ve seen many folks suggest John Wick star Keanu Reeves or The Batman actor Robert Pattinson, but I wouldn’t have figured Elba would voice Knuckles before that casting was announced, so anyone’s fair game.

It does make me wonder if other members of Team Dark, which Shadow occupies with treasure hunter Rouge the Bat and robot E-123 Omega, will make an appearance in Sonic the Hedgehog 3. Rouge has a longstanding rivalry with Knuckles, so it’s entirely possible she will make a debut in the standalone Paramount+ series focusing on Elba’s character, which would save them the trouble of working an intro into the next movie. Omega seems less likely, given he was made by Eggman in the games. It might be interesting to see if they come up with an alternate backstory for him as a GUN robot guarding Shadow, as that was his role when he debuted in Sonic Heroes.

Sonic the Hedgehog 2 is now playing in theaters.