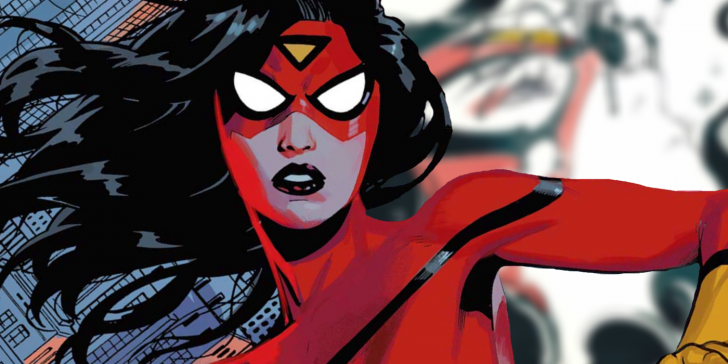 Marvel’s Spider-Woman, the lesser-known member of the popular Spider-Family, desperately needs better villains (and the villains themselves are well aware of their own shortcomings when it comes to stopping their nemesis). The superhero is unique among others within the Marvel Universe; Jessica Drew has a network of friends who know her true identity, she’s a single mother, and her book routinely break the fourth wall without a Deadpool-like awareness of the medium or the reader. Nevertheless, Spider-Woman #20 provides Drew’s villains with multiple attempts to defeat her, and every one of them fails.

Spider-Woman was not created to add a new character to a popular Marvel franchise, but rather to prevent DC from creating one of their own. After the company created Wonder Man after realizing DC only held the copyright to Wonder Woman, they realized the Distinguished Competition could easily copyright female versions of popular Marvel characters as well. Thus, Spider-Woman (and She-Hulk to a lesser extent) were created as a stopgap measure, but the two eventually became fan-favorites in their own right and stood apart from Spider-Man and the Hulk.

In Spider-Woman #20, all of Jessica Drew’s villains meet up at the Ice Queen’s secret lair (in reality the back room at the Rainforest Cafe in New York City) to discuss a plan to defeat Spider-Woman once and for all. One by one, the villains regale their stories, and unfortunately, a great many are completely ineffectual. The Seekers even ambushed Drew while she was eating at a public restaurant – but were all defeated through insults regarding their attire, not superheroics. The most successful villain of them all is one Perry P. Parish, who used a monster truck to destroy Spider-Woman’s motorcycle.

Together, the villains of Spider-Woman constitute the “Anti-Arach9”, clearly playing second fiddle to the more famous Sinister Six. It’s certainly true that Spider-Man villains have a habit of teaming up to take down their foe (and their collective plans falling through just as often as their solo endeavors), but Spider-Woman’s villains are hardly memorably. Outside of the Skrull Veranke, Drew’s most famous foes are enemies that already belong to other franchises, such as Juggernaut, the Enchantress and Madame Hydra. Others such as the Brothers Grimm are shadows of their former selves.

This is perhaps why Drew is not as popular as her male counterpart. Spider-Woman is an excellent character cursed with a subpar rogues gallery and casual fans assuming a relationship with Spider-Man (as Drew herself reminds everyone, the two have different powers and aren’t related except in name). Spider-Woman’s villains have the right idea in attacking their enemy together, perhaps because they believe they won’t be recognized alone.

Next: The Most Interesting Spider-Man is Left Out of Marvel Movies