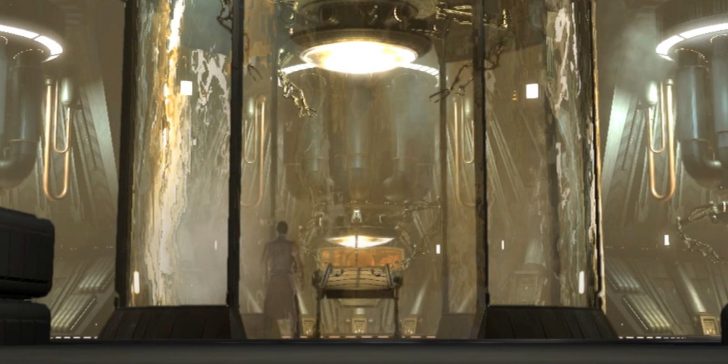 There are five Holocrons to find on I.S.S. Empirical in the fourth level of Star Wars: The Force Unleashed, and each one has a different reward.

After defeating Shaak Ti on Felucia, Starkiller returns to Darth Vader, and they prepare to face the Emperor. However, the meeting is a trap, and Vader is ordered to kill his apprentice. After being blasted into space, Starkiller’s body is recovered, and he awakens to resume his work for Darth Vader. In order to carry out his mission, Starkiller will need to escape the facility he’s in. While finding the way out, players can search for Holocrons in Star Wars: The Force Unleashed.

Holocrons are collectibles that can be found in every level of Star Wars: The Force Unleashed. The most common reward for collecting a Holocron is 10,000 Force Points, which are experience points that help players level up. There are usually 15 Holocrons in each level. However, since the I.S.S. Empirical is a much smaller level, it only has five Holocrons to find.

All I.S.S. Empirical Holocrons In Star Wars: The Force Unleashed

There are only a few areas to look for Holocrons in, so it should be fairly easy to collect them all. The first one is unavoidable because players will run into it after getting through the first door. The rest of the Holocrons in this level aren’t too far out of the way and are easy to get to. There are a few valuable rewards for collecting all five I.S.S. Empirical Holocrons in Star Wars: The Force Unleashed.

Holocron #1 (Blue Crystal): After lifting the generator to access the first door, the Holocron will be in the hallway. It’s directly in the path while progressing through this level.Holocron #2 (Talent Sphere): In the room with large specimen tanks, players can jump down, then turn around. The Holocron is behind the door on the right beneath the entrance to this room.Holocron #3 (Combo Sphere): The next Holocron in Star Wars: The Force Unleashed is in the same room as the previous one. This Holocron can be collected by breaking open the last tank on the left.Holocron #4 (Power Sphere): In the escape pod bay, there’s a Holocron that can be found by lifting and moving the last escape pod on the left.Holocron #5 (Lorrdian Power Crystal): At the end of the level, there’s a long hallway with a few enemies to defeat. The Holocron can be seen glowing behind some barrels in the right corner at the end of the hallway. Players can move the barrels to collect the last Holocron for this level in Star Wars: The Force Unleashed.

Next: Star Wars: Video Game Legends Characters Who Should Be Made Canon

Green Lantern Is Broken (But DC Refuses to Fix Him)