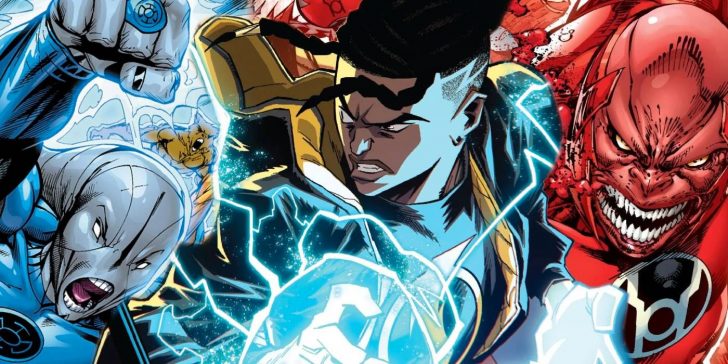 During an epic speech by Static, he inadvertently challenges the Blue and Red Lanterns’ depiction of hope and anger as opposing forces.

Warning! Spoilers for Static: Season One #6

During an epic speech by Static, he inadvertently calls out the DC Universe’s mainstream lore regarding Green Lantern. Static: Season One #6 challenges the Blue and Red Lanterns’ depiction of hope and anger as opposing forces. During his speech, Virgil Hawkins reveals that his previous sense of anger was generated by a deeper sense of hope for a better tomorrow in Dakota.

Throughout Static: Season One, Virgil has grown from a teenager with superpowers into a superhero capable of inspiring a city. As he fights a gang of bang babies alongside his friends, the first season finale solidifies his journey. While his arc comes to an end, he receives a new suit from his sister Sharon and decides to appear publicly on television, by using his powers to interrupt the frequencies and transmit a message. The moment acts as his official first appearance as a superhero for the world to see in Static: Season One #6, written by Ayala Vita with art by Nikolas Draper-Ivey.

During his speech, Static explains why “anger” can be a sign of hope, as he has learned how to redirect his aggression to protect Dakota. Static’s dialogue emphasizes his character arc, and brings Green Lantern lore into the conversation. In the DC Universe, the Blue Lanterns and the Red Lanterns are typically depicted as opposites. While the Blue Lanterns rely on “hope,” the Red Lanterns find power through their rage. However, Static elaborates on how his previous anger was only a symptom of underlying hope for a better tomorrow in Dakota. His vision of the future made him react angrily, recognizing the world isn’t the way it should be. As a superhero, he learned to channel that rage to make his vision possible. Static speaks to the citizens of Dakota City, saying, “When channeled, anger can be the fuel to bring about great and positive change–it can build and protect. When directed, anger can be revealed to be hope.”

The Red Lantern Corps has frequently been depicted as anatomists to the Green Lantern Corps, due to their abundant rage. Whereas the Green Lanterns rely on their will as the source of their powers, the Red Lanterns find similar energy in their aggression. In contrast, a Blue Lantern ring is energized by a sense of hope. The various Lanterns operate on an emotional spectrum, but consequently make it seem as if “hope” and “rage” can’t overlap, as Virgil has learned that they can.

Although the two alternate power sets are specific to Green Lantern lore, the DC Universe tends to function by similar logic. The “law” of hope and rage as conflicting feelings have typically extended to other corners of the multiverse. The alteration in Milestone’s philosophy from the mainstream lore might show how much freedom the creative teams have to differentiate from other titles. It has yet to be clarified how detached the Dakotaverse is from the overarching DC Universe, but Static’s main takeaway from his first season could be a good indication.