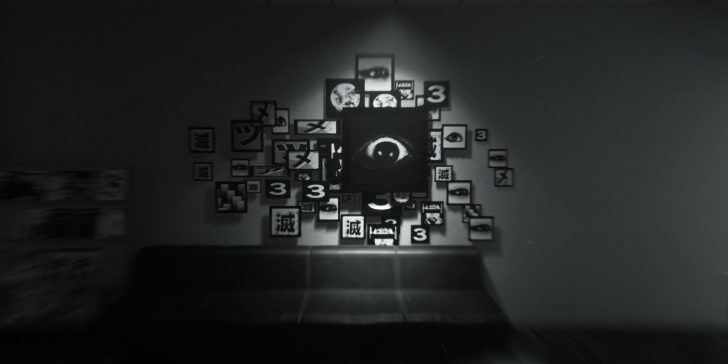 I look at the Ghostwire: Tokyo icon on my PlayStation 5’s dashboard for what feels like an eternity. The music tags along with me in the background as I grab my Chromebook and start writing a couple drafts. A list with tips tends to be a given for big releases, so I begin with that. I then turn the lights off and get startled by my jacket hanging on a racket near my apartment’s door, thinking it’s a shadow. I tend to be scared easily, but the creepy background music and the sound of the rain outside my window has set me in an uneasy mood earlier than expected.

I usually play without headphones, but they seemed fitting this time around. They get me closer to the music and let me hear details I hadn’t noticed before. A loud sound of a horn goes around the back of my head from ear to ear, while a voice shows up unexpectedly every once in a while. Sometimes distant, sometimes near. I prepare a second draft and start the game.

Persona 5, The World Ends With You, Digimon Story: Cyber Sleuth —I’ve been in virtual iterations of Tokyo many times. But this is the first time I’ve seen it this haunted.

The first night is all about establishing what I’m going to be covering. It’s not my first time going through an open world game, so I’ve come to expect certain mechanics and features. The first chapter serves mostly as an introduction as the map slowly begins to open up. I begin taking notes of collectibles, any confusing terms, and mechanics that are explained only briefly. Most of the smaller details can go to the tips guide.

Less than an hour passes and I’m already on the edge of my seat. The first person perspective has me trapped inside. Stairs move all of the sudden and pile themselves up, preventing me from escaping the narrow corridors of a hospital. Walls shift and morph in real-time. I pause to write some notes every now and then. Sometimes, I side-eye the corridor that leads to my apartment door to see if the jacket is still there.

After my first steps guiding Ghostwire: Tokyo, I get out to the open world and continue my progression through the main story. Every quest leads to several new discoveries, from collectible types to mechanics to explore. It’s already overwhelming, but I now have a more solid idea of what I want to cover.

Saving the game crashed my PlayStation 5 and set it to repair mode. I’m not sure if it’s a sign I should go to sleep, or if the game has given me a moment of grace by letting me escape its grasp. At least until the next day.

The GoldFish and a Red Umbrella

It’s the first time guiding Ghostwire: Tokyo during the daytime, and I’m much more relaxed. I continue to wear headphones to not lose the ambience too much, but the game throws me off right away. Booting it up leads me to a distorted Bethesda logo that glitches itself. It showcases the shape of a figure, but it quickly fades away. I can’t recall if it did this the first time around as well.

Tokyo in this game is a lonely city to traverse. There are no characters around aside from spirits. But in some way, it’s hard to feel alone at all. I can hear music from closed restaurants and voices coming from the mouth of its empty streets. I end up dropping the guide on torii gates since the game marks them on the map automatically. I begin writing three other drafts. Ghostwire: Tokyo’s world keeps opening itself up, and I wonder when it’s going to show me everything there is to see and allow me to gauge my options. I remain undecided about rushing through the main story first to unlock everything before coming back to hunt down collectibles or focus on side tasks as they appear.

As I continue to make progress through the campaign, I get distracted by a staircase that leads to an underground parking lot near Shibuya. There are plenty of bicycles around, but the space is much smaller and quieter than what I pictured. A couple of seconds later, I start hearing a distant grunt getting closer, followed by heel steps. I turn around to see a spirit carrying a red umbrella while walking down the stairs. It doesn’t talk, but every step scratches the inside of my ears. I try to stealth my way around it but I’m spotted right away. Once the fight’s over, I double check that I haven’t missed anything before I leave.

I stop at the entrance of the GoldFish where a jazz band is playing. The reservation list seems full, so I stand under the rain to listen. I close my eyes and picture the inside of the bar. The drummer gives the saxophonist a familiar sign to indicate the start of another song. The bartender has been pouring whiskey all night. Echoes of past lives crowd the dance floor.

Shibuya suddenly shuts down to give room to the ghost parade. I hide behind a car as I witness the slow march.

Two stray dogs are following me, which makes for a welcoming company. A story event has stripped away my powers temporarily, and with them many of my usual actions. This sets back my work plans for the day, so I finally decide to rush the main story until I recover my abilities. It makes me feel bad to sprint and leave the dogs behind, so I walk instead, turning my head around every couple of meters to see if they’re still there.

We come across a convenience store where I stop to purchase dog food to thank them. Sadly, a couple of enemies scared them off while I was shopping, so I’m alone again.

The spiritual presence is more noticeable now. A shop’s curtains open and shut themselves at inhuman speeds. The silhouettes of headless children are reflected on an abandoned truck. I start sprinting again.

I stay inside a convenience store listening to the radio while I continue working. It goes from jingles to advertisements. I have the voices set in Japanese, but I can vaguely understand some of the ads just by the tone of the voices and sound effects. A woman promotes a new sparkling beverage. There is an upcoming film about the yakuza. A few songs follow.

The embargo has sneaked up on me, which means my time guiding Ghostwire: Tokyo is coming to an end. I’m aiming to have them ready by Monday, but I’m not working during the weekend, so I adjust my plans accordingly. I spend the day cleaning up notes and organizing screenshots. A part of me doesn’t want to leave.

By the time night arrives again, I’m in a different living room. Nothing is what it used to be. Mundane objects shift and morph in real-time. The image on the TV distorts again. I have lost count of how many times it has done that in the past week. But it doesn’t matter. I heard they’re playing jazz at the GoldFish tonight, and my name is on the list.