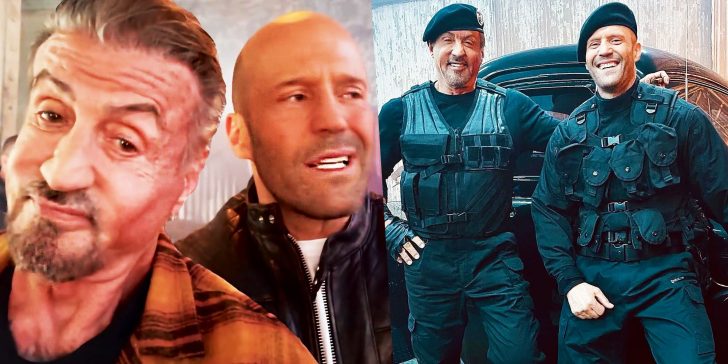 Sylvester Stallone posts a cheeky video with Jason Statham from the set of The Expendables 4, suggesting that he’s “leaving” the franchise.

Sylvester Stallone has posted a cheeky new video from the set of The Expendables 4 with Jason Statham, saying that he’s “leaving” the set to his co-star. Stallone created The Expendables in 2010, starring as the lead character, Barney Ross, the head of a mercenary business with a bunch of rough-and-tumble recruits that travel the globe taking on high-stakes missions for big paydays. The series was meant to be a throwback to the action films of the ’80s and ’90s, bringing back the stars of the era to team up from film-to-film. Thus far, The Expendables has spawned two sequels, featuring stars like Jason Statham, Bruce Willis, Arnold Schwarzenegger, Jean-Claude Van Damme, and Antonio Banderas, amongst others.

The Expendables 3 took a detour, bringing in a young cast and opting for a PG-13 rating, which caused it to be the lowest-grossing installment of the franchise. Now, the fourth entry, the aptly titled Expend4bles, seeks to reunite more of the older stars, including Dolph Lundgren and Randy Couture, while recruiting new (yet polished) action stars. This includes those from Asian cinema, such as The Raid’s Iko Uwais (as the main villain) and Tony Jaa. Also entering the Expendables franchise for the first time is Andy Garcia, Megan Fox, and 50 Cent.

In a new video posted by Stallone (which appears to be an “old” video), the actor cheekily teases Expendables 4 co-star Statham about “leaving,” saying that the actor will be on his own. Statham feigns sadness, saying, “It’s going to be a very lonely set, now he’s leaving us. It’s called a mutiny. It’s called abandonment.” Stallone replies, saying that Statham is “more than capable there, captain,” implying that he’s leaving the actor in charge of the group as he makes his exit. Check out the full exchange below:

While the video feels like it’s simply a bit of fun showing the camaraderie between two actors on set, it can’t help but also feel a little ominous to the suggestions and theories that say Stallone will not only be leaving The Expendables franchise, but that he’ll be killed off in The Expend4bles. Recently, footage was revealed from the latest entry at CinemaCon, as well as a poster, both of which billed Stallone as “And Sylvester Stallone”, which suggests his part is much smaller this time around. It’s also been theorized that Stallone would be handing The Expendables over to Statham’s character, Lee Christmas, as a spinoff film featuring his character was rumored as far back as 2020.

This latest set video from Stallone doesn’t feel like it was posted accidentally. and the stories continue to stack in favor of the legendary actor ending his tenure with The Expendables. It’s entirely possible that his Barney Ross doesn’t die, but merely takes a backseat role (similar to the Mickey Rourke character in The Expendables), but if the fourth entry wants to take some risks, killing off Ross is a good move. Stallone has been distancing himself from various franchise roles of late, including Rocky and Rambo. Instead, he has been opting for newer roles that fit his age range, such as next year’s superhero film The Samaritan and the Taylor Sheridan-produced gangster series, Tulsa King. However it plays out, Stallone has at least created a franchise that can continue to pass the torch for decades to come, whether The Expendables 4 acts as his exit or not.