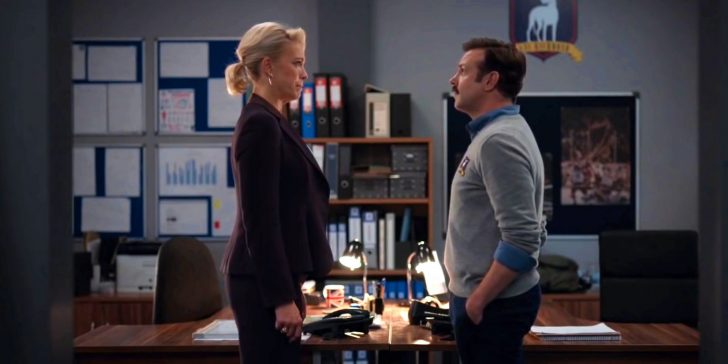 Apple TV+’s Ted Lasso season 3 will begin filming next month, according to star Hannah Waddingham, who plays Rebecca in the hit comedy series.

Ted Lasso season 3 is due to start filming next month, according to star Hannah Waddingham. The Apple TV+ series is a sports-comedy-drama which follows an American college football coach who unexpectedly becomes the new manager of English Premier League team AFC Richmond. Lasso, played by Jason Sudeikis, is a classic fish-out-of-water character as the bemusing coach. The series has been a huge hit for Apple’s streaming service and has been embraced by both critics and audiences, resulting in a total of seven Emmys won by seasons 1 & 2.

Waddingham stars alongside Sudeikis in the comedy show as Rebecca Welton, who finds herself the new owner of the football club following her divorce settlement. A spiky, bitter character at first, Rebecca eventually warms to her unlikely position, as well as to Ted’s openly kind demeanor. For her performance, Waddingham won the Emmy for Outstanding Supporting Actress in a Comedy Series in 2021, one of several cast members praised for their part in the popular show.

Now, Waddingham reveals that the much-anticipated Ted Lasso season 3 will begin filming next month. In an interview with Variety, the actor clarifies that the show is currently preparing to begin production, which she warns is more work than viewers might expect. Waddingham then offers what seems to be the first confirmation of a filming date, saying the team will reconvene on March 7. Read her full quote below:

We haven’t started filming. We’re kind of doing our prep for it at the moment. And that’s a lot more time-consuming than most people think. It’s like getting a load of plates spinning in the right direction again. […] I think we reconvene around the seventh of March. We’re all absolutely champing at the bit, it feels like it’s been an awful long time.

Aside from her award-winning role in the comedy hit, Waddingham recently joined the cast of Hocus Pocus 2. The long-awaited sequel is heading to Disney+ this October. Ted Lasso season 3 is set to carry just as much buzz online as its predecessors, and co-creator Brendan Hunt has recently teased fans with the prospect of a slight time jump in the upcoming episodes. Reports in recent weeks suggested filming on season 3 outing had been delayed, but Waddingham seems to have allayed any fears of a long wait by confirming the March production date.

Fans of the unlikely smash hit will be relieved to know that season 3 is on its way soon. With a March filming date now confirmed, audiences can expect to see Ted Lasso return either this year or early 2023. More hilarity and heart-warming humility is on its way, but in the meantime, the first two seasons of Ted Lasso are available to stream now, exclusively on Apple TV+.

Next: Every Apple TV Original Show Ranked From Worst To Best

Elliott is a freelance entertainment writer for Screen Rant from Northamptonshire, England.
A trained actor, Elliott is also a keen film and TV enthusiast, which led to him pursuing entertainment and media writing.
Following years of amateur film critique and review, Elliott established a Social media page for his Film Review site ETCinema Reviews, before further adding to his experience by joining Screen Rant.