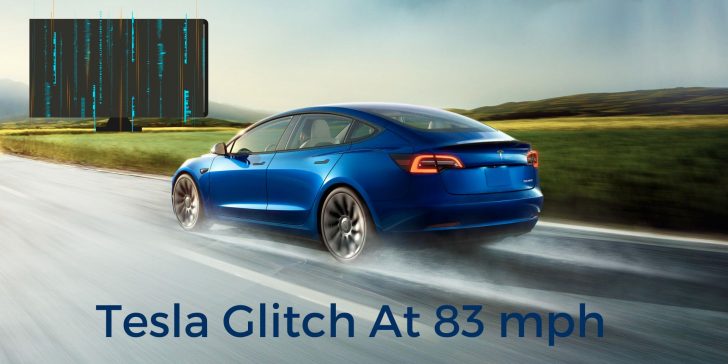 A Tesla Model 3’s computer screen froze when the driver was on a freeway. The turn signals, hazard lights and accelerator all stopped working.

In California, a Tesla owner reported his car’s computer freezing when he was on the freeway. Elon Musk’s eclectic vehicle company is known to have glitches. As a result, it’s had several recalls. In February, the company recalled almost 600,000 cars due to the pedestrian warning system, not meeting regulations. In addition, Tesla recalled 800,000 vehicles for a seat belt warning issue during the same month. Luckily, these glitches can be fixed with over-the-air (OTA) updates.

Earlier this year, a popular YouTube channel posted a video of a test drive of Tesla’s self-driving update, version 10.10, and found some errors. This included running a red light and colliding into green posts. This can be scary for a driver when on the road. It makes it especially scary when the person is traveling at high speeds on the freeway. The last thing they want is a glitch in the system. Considering small machines like laptops and smartphones have glitches, it’s no surprise that a bigger one will have problems, but when the safety of the driver and passengers is a priority, manufacturers should better ensure these issues don’t happen.

According to ABC 7 Eyewitness News, Javier Rodriguez’s new Tesla Model 3’s computer screen froze when driving down a freeway in the Los Angeles area at 83 mph. The driver claims that none of the buttons or switches were working, “including turn signals and hazard lights.” The accelerator was also not responding. Luckily, the brakes were still functioning, but Rodriguez was worried that if he pushed on the brakes too much, he wouldn’t be able to keep up with traffic, and someone might crash into him. A California Highway Patrol officer helped the Tesla driver get off the freeway. The vehicle rebooted, and everything seemed fine. Rodriguez had the car towed and taken in to be inspected.

A Scary Glitch With No Justifiable Answer

Tesla was unclear about what caused the issue but said it had been fixed. Rodriguez said the report stated, “Diagnosed and found poor communication from charge port door causing power conversion system to shut off in order to protect onboard components during drive.” The issue was due to the charge port door, which has been known to cause problems in the past. However, it’s usually when trying to charge the car, not while driving.

It’s not comforting to know that a faulty connection caused the system to freeze. So it’s understandable why Tesla’s explanation doesn’t reassure Rodriguez. There are enough hazards on the road that drivers have to avoid. They don’t need their own car failing them too. However, it’s not surprising that Tesla was vague on the details. The company usually drags its feet on recalls too. It doesn’t want to admit to a fault unless they are forced to.

Screen Rant’s Tech Editor, Mandy Carr, started at SR in October 2021.
She was the former managing editor for the start-up media company, Bold TV, where she grew the website and social media accounts by 20%. She went on to be the communications manager for the New York Academy of Sciences’ education programs. She launched and grew the Instagram account 1000 percent in one year while building a community for the students.

You may have also seen Mandy’s work on her blog, Primetime Addiction, where she has interviewed some of her favorite TV show actors. She started her website during her master’s in the magazine journalism program at the University of Sunderland.

Mandy has a lot of interests. She also loves tennis, ice skating, history, going to concerts and is a self-proclaimed Swiftie.