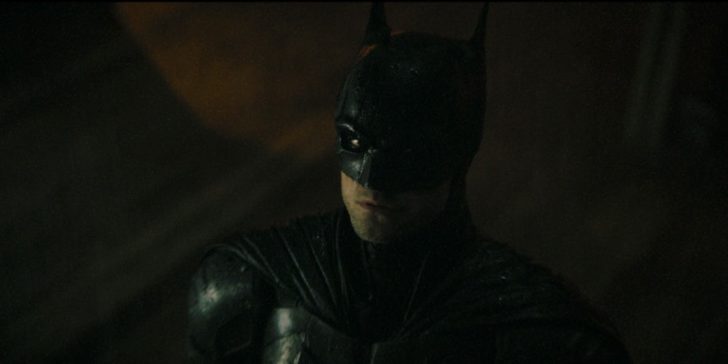 When Warner Bros. announced that they would be rebooting the Batman franchise once again to tell the story of a young Dark Knight at the beginning of his career, I was not excited by the prospect. The movie studio seems to have a very myopic view of the character, ignoring the wide variety of tones and styles found in Batman comics and continually returning to the same half-dozen stories for inspiration — The Dark Knight Returns, Year One, The Long Halloween, etc. — comics that were themselves attempts to recapture his original charm as a hard-boiled pulp hero of the late 1930s. I thought I’d had enough of this take on Batman. I was absolutely wrong. Though a bit overlong and overwhelming, Matt Reeves’ The Batman is the first film in the franchise to truly do justice to a character who debuted in a book called Detective Comics.

Bruce Wayne (Robert Pattinson, The Lighthouse) has spent the past two years patrolling the rain-slick streets of Gotham City as a masked vigilante and, in short, it isn’t helping. Violent crime is up and sales of a popular designer narcotic are booming, lining the pockets of a brazen criminal underworld. Nevertheless, Bruce refuses to hang up his cape and cowl. Being the Batman is an outlet for his rage over the murder of his parents, a twenty-year old wound that’s healed all wrong. When criminals on the street ask him who he is, he answers, “I’m vengeance,” because that’s all he is, all that the Batman represents. Bruce Wayne, on the other hand, is essentially no one, a total recluse who has abandoned his family’s charitable and business concerns. His surrogate father, Alfred Pennyworth (Andy Serkis, star of Reeves’ Apes films) fears that he’s running headlong into total ruin.

Bruce’s worldview is challenged when a serial killer calling himself the Riddler (Paul Dano, Swiss Army Man) begins executing public officials and exposing their corruption. The Riddler leaves coded messages for Batman at each crime scene, leading him to investigate the intertwining interests of organized crime, “legitimate” business, and the houses of legal authority in Gotham. Along the way, he encounters femme fatale Selina Kyle (Zoë Kravitz, KIMI), who’s on her own quest for revenge against the local crime family, represented by kooky underboss Oz “The Penguin” Cobblepot (an unrecognizable Colin Farrell) and troublingly calm don Carmine Falone (John Turturro, Severance). The deeper Bruce digs, the more dirtier the city appears, and even his own family may have blood on their hands.

The Batman has a lot of plot, constantly introducing new angles and complications for just shy of three hours. This could easily become unwieldy or confusing, but it helps that the point of view never strays far from the title character. Every new wrinkle follows naturally from the last, and the audience is never asked to manage multiple threads at once or hold information in their heads for long periods of time. There’s not a lot of planting and payoff, dramatic irony, or shocking twists — the story simply unfolds, which is a refreshing change from the typical, beat-by-beat predictable Hollywood blockbuster. There is, however, a drawback to eschewing traditional structure — Only hours after seeing The Batman, I am already struggling to recall the shape of the story. Its themes, performances, and a few key moments of action have left a strong impression, but the film as a whole has melted into a big pile of Movie Goop, a dish of delicious liquid ice cream that I don’t know how to eat.

Our guide throughout the mystery is Robert Pattinson, whose weirdo energy is perfect for this totally maladjusted take on the character. Pattinson’s Batman strikes an uncanny balance between total confidence and complete awkwardness, an immovable object that is out of place in all settings. He makes no effort to portray himself as some unknowable supernatural force — he’s a man in a bulletproof bat outfit who walks amongst cops and criminals and dares them to fuck with him. Like Michael Keaton’s portrayal from Tim Burton’s Batman films, Pattinson’s Dark Knight is off-putting and yet likeable, which only makes his moments of unhinged violent rage seem that much more shocking. It’s too early to say for sure, but I left the theater wondering if Robert Pattinson might be my new favorite live-action Batman.

It helps that director/co-writer Matt Reeves arrives with something to say about the character. His thesis seems informed by modern conversations as to whether or not wailing on poor people in the streets is the best use of a billionaire’s resources, but also by the original concept of a superhero as someone who helps people, a purpose that has all but disappeared in modern superhero cinema. The Batman’s Bruce Wayne is so removed from the rest of humanity — by his quest and by his wealth — that he doesn’t seem to know or even really care what people need from him. Bruce must learn, among other things, that tragedies like the one that he suffered as a child befall other children all the time, and they don’t have the benefit of widespread media sympathy and a three-comma inheritance. If Batman’s going to be of any use to them, then he has to become something more than an avenging angel who emerges from the shadows, breaks a mobster’s face, and disappears. I don’t think Reeves fully nails the execution, but it’s an interesting theme for a Batman movie to have.

This is the rare Batman film in which none of the villains or supporting characters outshine Batman himself, which is particularly impressive given the strength of its ensemble. Zoë Kravitz gets a number of cool movie star moments in action, suspense, and romantic contexts. Colin Farrell’s take on the Penguin as a lost member of the Soprano crew is plenty entertaining, though some of the entertainment value comes from occasionally saying to yourself “Jesus Christ, I can’t believe that’s Colin Farrell. That shouldn’t be Colin Farrell!” Paul Dano plays the Riddler with unreserved manic conviction, and while I’d argue that he may have taken it a notch too far, he held the entire audience at my sold-out IMAX screening in rapt silence.

Every charactes makes a splash, but the sheer number of them also dilutes the importance of each to the story. Bruce’s relationship with his mentor Alfred seems at first as if it will be of paramount importance to his emotional arc, but ends up buried under the sheer amount of business that needs doing, and their subplot concludes before the third act even begins. Lt. Jim Gordon (Jeffrey Wright, The French Dispatch) is all over the movie, but is mostly a procedural character. Selina Kyle gets plenty of screen time and a traceable story arc, but her romantic subplot with Batman depends more on Kravitz and Pattinson’s chemistry than anything that’s on the page. Carmine Falcone is a key figure in the lives of both Selina and Batman, but ends up the most forgettable of the film’s villains. It’s simply a lot to manage.

All Batman stories, on screen or in the comics, are reinterpretations of the character and his world through the lens of its creators. There is no one “accurate” look, tone, or sensibility for a Batman story to have. If you’re looking for the Batman film that most closely resembles the comics from the time in which it was made, that will probably always be Batman: The Movie from 1966. However, if you were to ask me which Batman film feels most like the best Batman comics made in my lifetime, I would answer “The Batman,” with no hesitation. It is not an extrapolation of a major Batman crossover or event or paradigm-shifting story arc. Instead, it feels like a really good five-issue run of Legends of the Dark Knight, a creator-driven, continuity-neutral monthly title that ran from 1989 to 2007. These stories typically had a limited scope, a strong character focus, and allowed artists to stray from the established DC house style and express themselves in their own idioms. That’s The Batman to a “t.”

The Batman is more like a film noir than any previous film in the franchise, both thematically and visually. It’s a detective story set in rainy streets and cramped night clubs, never leaving the city limits. Aside from maybe the TV series Gotham, this is the most specific and lived-in depiction of Batman’s hometown yet seen in live-action. Like most Batman comics from the past 35 years, the film incorporates narration in the form of pages from Bruce’s hand-written diary. The Batman features a captivating color palette that contrasts warm ambers and reds against its dark shadows (courtesy of Dune’s Oscar-nominated cinematographer Greig Fraser) and demonstrates a great deal of directorial restraint. Matt Reeves rarely sensationalizes what we’re watching — the fact that our characters are bizarre comic book figures is sensational enough. The action is exciting and legible, but punctuated with cool little moments rather than “epic” ones. Composer Michael Giacchino gives each character a simple, adaptable leitmotif, enriching but not distracting from the drama on screen. Everything is understated because this is a drama first and a blockbuster second, to the extent that its city-saving finale, which is a pretty small setpiece by modern superhero standards, still feels a bit too big for this movie.

The Batman is a very talky film, but what action there is looks damn cool. Batman’s fighting style in the film closely resembles the kind of chain combos seen in the Arkham games, stringing together strikes and counters while constantly moving forward with Terminator-like focus. This is a Batman that walks more than he runs. Catwoman has her own style of lightning-fast kicks and throws that sell the 5-foot-two Zoë Kravitz as a credible physical threat. The film’s most successful action number is unquestionably the car chase featuring the Batmobile, which looks like a cross between a hot rod and a demolition derby car, a coupe to strike fear in the hearts of men. Overall, I’m struck by how real the action in The Batman looks. I’m sure it contains hundreds of visual effects shots, but at no point during the film did it even occur to me to think about VFX at all.

If you’d handed me $200 million and asked me to make a Batman movie (imagine, in this scenario, that I’m a filmmaker and not just some dumbass who writes about movies), I would have made you something completely different. “We’ve done this Frank Miller shit to death, let’s move on,” I’d have said, and gone to work adapting one of the weirder or more colorful stories in the Batman canon. Stories where Batman copes with being the accidental patriarch of a sprawling family of costumed misfits to whom he doesn’t know how to communicate, or fights a guy on a giant xylophone, or pilots a fucking Gundam. There are a million flavors of Batman stories that have never been seen by a mass audience because they live only in the pages of the comics. But, as an adaptation of the very specific version of Batman that Warner Bros. is interested in putting on the big screen, The Batman nails it. It’s not that The Batman is a better film than The Dark Knight, or Batman Returns (which, to me, is a masterpiece), it’s that it feels more worthy of the character than any previous effort. And, if we must have more of these, then I would be happy to see Matt Reeves and Robert Pattinson remain at the helm for the next generation of Batman films.