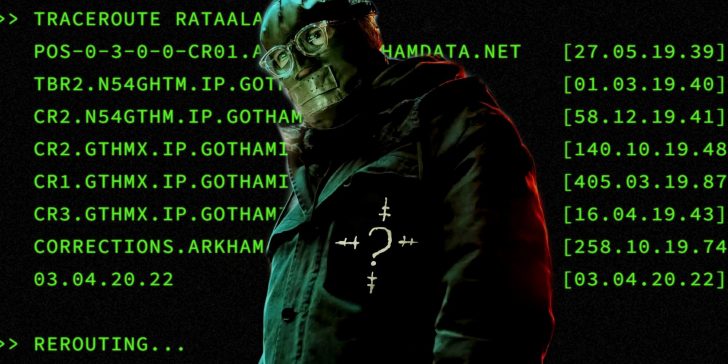 The Batman’s secret promotional website, “rataalada.com”, that was teased during the film’s credits, has been updated with a mysterious new countdown.

Warning: This article contains spoilers for The Batman.

The Batman’s secret promotional website, “rataalada.com,” which was teased during the film’s credits, has been updated with a mysterious new countdown. The website contained a series of puzzles inspired by the film’s main antagonist, the Riddler. Paul Dano portrays the well-known villain in Matt Reeves’s first Batman-related project for DC and Warner Bros.

While the Riddler was ultimately apprehended by the end of The Batman, captured by Batman (Robert Pattinson), James Gordon (Jeffrey Wright), and the Gotham authorities at the Iceberg Lounge club, the story hasn’t ended for the character yet. During the film’s credits, a URL flashed briefly throughout for “rataalada.com,” which took fans to a website that offers a series of riddles and puzzles utilizing the character’s code cipher featured in the film. Fans quickly took to the website to solve the villain’s scheme, proving that Riddler’s story wasn’t over. Following the film’s theatrical release, the website has been updated with a mysterious new countdown.

If fans now go to rataalada.com, they will be taken through a short sequence that shows the website being rerouted through various networks and ISP addresses across Gotham City, including the network for Arkham State Hospital, where the character was last seen in the film. The website then takes users to a page featuring a link titled “[CLICK FOR REWARD]” while a countdown sits below it that shows a loading bar. The link will take audiences to a jpg file titled “Its_Not_Over_Yet.jpg” that features a new coded message written in the Riddler’s coded cipher that hints “something is coming.” At the time of writing, the countdown is at 20%.

The website was first discovered in December 2021, at which time it listed a number of riddles and puzzles for fans who felt up to the challenge ahead of The Batman’s theatrical release. By interacting with the super-intelligent villain through the website and completing his challenges, fans unlocked many cryptic pieces of promotional material, such as a video for Thomas Wayne’s (Luke Roberts) mayoral campaign that the villain had edited over with foreboding phrases such as “Hush.” Many speculate that the message featured on the website could be a subtle reference to another Batman villain with close ties to the Wayne family, the celebrated surgeon-turned villain Hush.

With The Batman’s Riddler having sinister real-world inspirations, “rataalada.com” is a perfect way to keep the unnerving villain in the minds of captivated fans. While the film ended with the character’s incarceration, Reeves’ The Batman universe has just begun, with spin-offs already in the works. Additionally, Barry Keoghan’s surprise character inclusion during the movie’s finale teases more chaos to come for Gotham. It is also possible that the countdown could lead to the release of material cut from the theatrical release of the film, with Reeves recently suggesting fans may see a deleted scene featuring Keoghan’s character at a later date. With the countdown still at an early stage, fans can only anticipate what secrets Dano’s villain may reveal next.

Next: Every Riddle In The Batman Explained