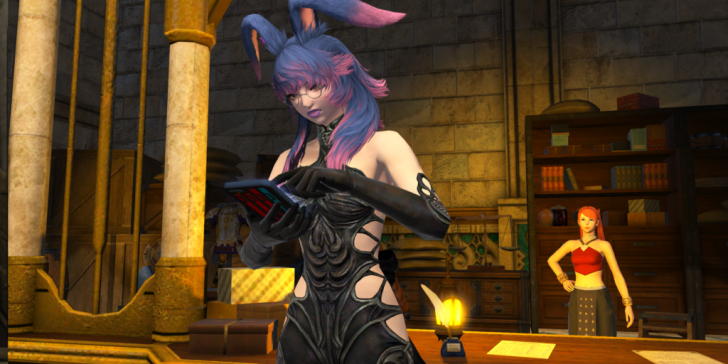 Valuable Tomestones are worth their weight in endgame gear, but what should you spend those FFXIV Tomestones of Poetics on? These much more common, less up-to-date Tomestones appear as rewards for all kinds of activities. You mostly get them for running older dungeons and other activities — or by playing as classes that haven’t reached their level cap yet. Sometimes you might even get an extra stipend for completing a Duty Roulette with a teammate that hasn’t run an encounter before. Even if that “teammate” happens to be you.

All of this means Poetics pile up quickly. So, what’s the best use of Poetics before the Final Fantasy gods decide you’ve had enough? How do you avoid hitting the 2,000 Tomestone limit (and losing the rest to “overcapping”) while still turning a profit? That’s where this guide comes in! We’re here to help you decide what to spend your Tomestones of Poetics on in FFXIV.

Leave It to Leveling Gear

If you’re leveling up alternate Jobs and need gear for them to progress smoothly through dungeons and other content, this is the best bang for your buck. Tomestones of Poetics are used to purchase endgame gear from all previous expansions (plus the base game). In fact, this is the very same gear that Square Enix includes with its “level skip” purchases for real money on the Mog Station website. This simply acts as a free method of farming it yourself. Though you still need to level up on your own.

The gear in question also changes every 10 levels. However, the “Item Level,” or “iLvl,” at each tier is strong enough to carry you from one to the next. If you purchase the Level 50 gear, for instance, you won’t need to upgrade again until reaching the Level 60 gear. It’s actually flat-out better than some of the higher-level gear you can buy with Gil off the Market Board. It’s just that good — especially when you’re running older content anyway.

The issue is finding the damn stuff. Each tier of gear changes location to match wherever the endgame vendor resided during that FFXIV expansion. Equipment that once was endgame-level in Stormblood, for example, is sold in Gyr Abania. Because that’s where players purchased their endgame gear in the Stormblood era. Making matters worse is that weapons and armor are split up between two different NPCs. The whole process isn’t as complicated as it once was, but it’s still a pain.

That’s why this guide will break down where you can get your leveling gear! Note that this only applies to players Level 50 and above. That’s when you unlock the first tier of equipment and can start using it to power your way through to Level 60, then Level 70, and so forth. We’ve also included images and coordinates to help make it perfectly clear who we’re talking about. Just in case you can’t mentally separate your Auriana from your Bertana in your mind. Let’s get to it!

This gear is found in Revenant’s Toll, Mor Dhona: a region most longtime players should recognize and that newer ones will learn to love (or at least tolerate). The appropriate Vendors are found just a bit north of the Aetheryte (coordinates X: 22.7, Y: 6.7). As indicated in the image above, Auriana will sell you Augmented Ironworks armor, while Aelina sells Augmented Ironworks weapons. A complete set will be the last Level 50 gear your need for whichever classes can use it.

The next set of gear is found in another major story zone you can’t miss: Idyllshire in Dravania. One of the most important NPCs here is Hismena (X: 5.7 Y: 5.2). She sells a good deal of items for Tomestones of Poetics, which we’ll get to later, but for now you just need to know she sells iLvl 270 gear called Augmented Shire armor. On her left is Bertana; she sells Augmented Shire weapons with the same Item Level.

Note that, when purchasing armor from Hismena, you need to select the option Allagan Tomestones of Poetics (DoW/DoM) II. The “II” is important. Her rank “I” gear is a different set altogether — with a different name and a lower iLvl. You don’t or need that unless you’re specifically looking for the Glamours. In which case, have at it! Otherwise get the Augmented Shire armor.

We’ve come to the example listed above! Rhalgr’s Reach in Gyr Abania was the hub for endgame gear during Stormblood. Now you can buy Augmented Scaeven armor from Enna (X: 13.9, Y: 11.6) and Augmented Scaeven Weapons from Eschina right next to her.

Also worth mentioning: Enna sells two tierst of gear. Just like Hismena in Idyllshire. You specifically want the armor bought from “Allagan Tomestones of Poetics (DoW/DoM) II.” Not the first tier! Just make sure whatever you’re buying is i400 and says “Augmented Scaevan” in its name and you’re good to go.

Last but mathematically not least is Cryptlurker. This can be found on the top floor of Eulmore in Norvrandt once you’re sufficiently deep into the Shadowbringers campaign. The two relevant NPCs, Aymark and Fathard, are due southwest of the Aetheryte (X: 10.2, Y: 11.8). Aymark handles armor while Fathard sells the appropriate weapons under “Cryptlurker Gear Exchange.” As with the previous few NPCs, make sure you get the correct class of gear! Aymark also sells “Augmented Crystarium” which you don’t want. Get the Augmented Cryptlurker gear instead from the higher level of Allagan Tomestone exchange.

When all of that is done, you’re ready to make your way into Endwalker!

Of course, you may not need new gear. Maybe you already have a complete set for every role in the game. Maybe you already have every class you want leveled up to the cap! Whatever the case, Tomestones of Poetics can still be used to purchase gear. Said gear can then be turned in via “Expert Delivery” at your Grand Company headquarters. In each of these areas you’ll find a Personnel Officer NPC to speak with, who will let you “Undertake supply and provisioning missions.” The last tab here is where you can turn in any unwanted gear for raw Grand Company Seals.

Here are the locations for each of the Personnel Officers, depending on which capital city’s Grand Company you belong to after choosing one in the main story:

Seals can be used to purchase Ventures, Cordial, Dark Matter, and other basic goodies that save Gil or help you make Gil.

Much like old leveling gear, old Relic Weapons (the catchall term for evolving, endgame weapons with their own questlines in FFXIV) have had most of their requirements relegated to Poetics. Put simply: old Relic Weapon quests ask you to buy a bunch of junk. You buy that junk with Tomestones of Poetics. While this doesn’t have any gameplay benefit (the old Relic Weapons are way out of date in terms of Item Level), you do get some of the best Glamours in the game out of it. The weapons glow and stuff!

You can obviously buy things as the quests ask you to, but there’s no reason not to stock up ahead of time! Even if you’re not on the hunt for glam yet, you might be one day, and getting this out of the way will save you from needing to active farm Poetics. Most of these items can be purchased from Hismena in Idyllshire. The others can be found with Auriana in Revenant’s Toll.

Here’s the basic checklist (excluding quest items not purchased with Tomestones of Poetics):

The “Unidentifiable” items alone will set you back 6,000 Poetics. That’s three times more than you can hold at once, so saving up ahead of time is a great way to save time. Most players passively accrue Tomestones of Poetics as they play, so there’s little reason not to bank them before you reach the maximum of 2,000 and start overcapping.

Also know that the first 10 items in this checklist are part of the long, interconnected questline between the Level 50 and Level 60 Relic weapons. The last item on the list, Thavnairian Scalepowder, is used to acquire your first “Resistance Weapon” in Gangos. This is the start of its own questline, mostly tied to the Bozjan Southern Front and Zadnor zones past the Doman Enclave. Yet the principle is the same; you need 1,000 Tomestones of Poetics to get all four units of Thavnairian Scalepowder necessary to start.

I already mentioned in my “How to Make Gil” guide that Tomestones of Poetics can be converted into a decent amount of money. For the sake of completeness, though, I’ll include most of that information here as well. The basics remain the same. Not to mention part of this should be familiar if you read the section on acquiring leveling gear. We just need to head to Idyllshire.

The NPC Hismena, in Rowena’s Center for Cultural Promotion, doesn’t just give out Augmented Shire armor. She also sells Goblinol and Goblacquer for just 10 Poetics apiece. This is under a different section of her stock: the “Allagan Tomestones of Poetics (Other)” category. Either item can be sold to any junk vendor found throughout the world for a respectable 64 Gil. “Respectable” is relative here, of course. Most loot in FFXIV earns pennies when sold to NPC vendors. But this still adds up to 12,800 Gil per 2,000 Tomestones. Note that this is the best raw Gil exchange. In case you missed the memo, Demicrystal prices were nerfed.

Another way to profit is by picking up Grade 3 Topsoils for gardening players. Hismena sells both Unidentifiable Seeds and Unidentifiable Ore (used in the Relic Weapon quests above). These can be exchanged, one-to-one, for Grade 3 Shroud Topsoil and Grade 3 Thanalan Topsoil, respectively. The NPC to her left, Bertana, will make the exchange.

These items can only be purchased up to 13 at a time, for 1,950 Poetics in total. Topsoil prices on the Market Board vary, just like everything else, but we often see these two types hover around 1,000 Gil apiece. That’s roughly 13,000 Gil per full stack of Poetics for those keeping count. One nice thing is that Topsoils are consumable. Gardeners always need more of them to produce their (much more valuable) crops. They’re always in demand and prices sometimes shoot up even higher.

Mathematically, these need to sell for at least 961 Gil per Topsoil on the market to be more cost-effective than simply selling Goblinol and Goblacquer to a trash vendor. Even then you’re only making fractionally more. Remember that time is money in FFXIV. Time spent putting the item on the market, waiting for a buyer, and potentially fiddling with prices to avoid getting undercut is time you could spend doing something else to make Gil. Check the market and only purchase Topsoils when you can reliably sell for at least 1,000 Gil. Preferably more. Otherwise, the Goblinol or Goblacquer are more efficient. Especially if you sell them to the Doman Enclave. Instructions on how to unlock that feature can also be found in the Gil farming guide linked above.

Finally we come to the… random toys. Many of the NPCs mentioned above also sell Orchestrion Rolls, minions, and other miscellaneous cosmetics. Don’t expect to make a bundle selling these on the market. Most players who even know they exist, much less care about them, know where to get them for Tomestones of Poetics. They’re basically just for completing your collection. I’m a particular fan of the “Dust Bunny” minion sold by Auriana, myself, but everyone will have their preferences.

And that’s it for now! Remember that the FFXIV Poetics grind changes with the tides (or at least every expansion). These basics should serve you well for quite some time to come, however. Best of luck!