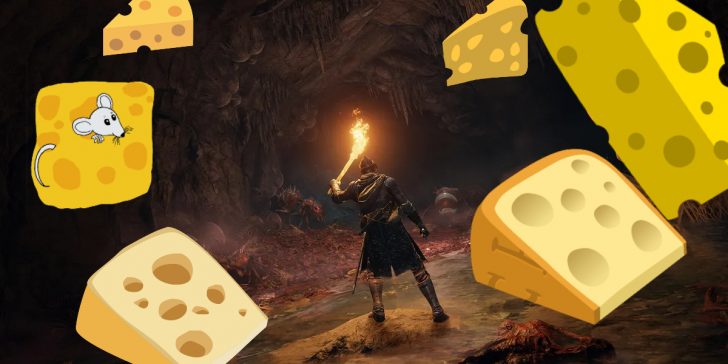 Cheese in Elden Ring is a delicacy. You don’t have to be experienced or knowledgeable with FromSoftware’s catalogue to have it. Cheesy tactics are something every maidenless, Torrent-loving Tarnished can enjoy. The only challenge? Picking where to start!

Okay, so we’re not talking about actual cheese, but rather the strategies you can employ to “cheese” a boss fight. This means winning in an unorthodox fashion, sometimes by using design exploits to your advantage. And in Elden Ring, there are plenty of ways to approach a fight.

Some soft cheeses will let you bash enemy brains in while healing with every hit while others help you take out that pesky knight without going within spitting distance of them. It all depends on how you like to play and what items and strategies you like to use.

Now, there is nothing wrong with tasting (and diving in headfirst) to some delectable slices of pepper jack and chunks of gouda. The game has been designed with these in mind, for Hidetaka Miyazaki’s sake! Tarnished were meant to be turophiles. Playing Elden Ring without cheese, though? Truly maidenless behavior.

“I just want as many players as possible to experience the joy that comes from overcoming hardship,” Miyazaki told the New Yorker in an interview. One essential part of overcoming hardship, whether it be a break up or Maliketh’s annoying area of effect attacks, is eating some delicious brie.

Here are some of the best cheeses — the best successful maneuvers — in Elden Ring and how you can take full advantage of them.

This hunk of swiss cheese is a little bit nutty, including an eight second aftertaste that comes with quite a kick.

Make sure to assign the Thop’s Barrier Ash of War to a fully upgraded Fingerprint Shield in order to become invulnerable to nearly all types of damage, except bleed, for eight seconds. This greatshield, especially when also coupled with Greatshield Talisman, has an incredibly high Guard Boost stat, meaning barely any stamina is used when blocking enemy attacks. It’s the perfect wake to poke holes in any and every boss.

The Fingerprint Shield can be found through some tricky platforming while the Thop’s Barrier Ash of was dropped by a Teardrop Scarab that spawns in the Church of Irith after Thops leaves for the Academy of Raya Lucaria.

Radahn’s Roquefort has veins of red mold containing a sharp tang that can wear you down over time. This blue cheese is absolutely delicious in large quantities, especially when you make a boss eat it.

Malenia, world-famous cheese connoisseur and undefeated sword fighter, left the Radahn’s Roquefort to age in the hot and humid deserts of Caelid after he foolishly rose up against the other demigods. She cured the cheese with scarlet rot, a mold that’s known to add a lovely bit of spicy flavor over time.

Want to try to make your own Roquefort in that god forbidden section of the Lands Between? Grab the closest incantation with Scarlet Rot, including the Rotten Breath incantation from the Cathedral of Dragon Communion and run for your life.

Apply it liberally at the start of any fight and those little pockets of mold will grow in real time. Just make sure you get out of range as soon as your hand dragon is done curing the cheese.

Pimento can’t be served alone. It’s best wedged between two slices of wheat bread with the crusts cut off to make a smooth and easy to digest meal. That’s why you might have to go on a shopping trip to the market by the lake.

This cheese takes an extra special item and some extra extra special circumstances to work. You need multiple Bewitching Branches, an item that can be purchased from a merchant in Liurnia or crafted once you reach Moghwyn Palace. It lets you brainwash enemy NPCs to fight for you.

Commander Niall, for instance, is the perfect recipient of a gift basket full of this punchy Pimento. He summons two spectral knights at the beginning of his fight. One will run directly at you, be sure to use the branch while the enemy NPC is a few steps away to make sure you land a direct hit. Then watch your cheese work for you.

Make sure to summon the Mimic Tear to add some extra spice to that sandwich.

There’s some cheese that just invigorates you, no? It fills you with energy and warm happiness as soon as it slides onto your tongue and down your throat.

Holy Comte has sweet and salty undertones that burst through you in waves. Every bite gives you a little bit of your life back, literally. Every hit with a weapon using the Prayerful Strike Ash of War will heal the user for 30 percent of their max HP with each hit.

You’ll want to have a good strength build with a weapon that staggers enemies easily. Those pesky enemies are falling over for the chance to heal you!

This is the most versatile and bold cheese in the Lands Between. Its simple and common nature can make some players scoff, but it’s definitely worth your time.

Remember all those times Margitt picked up your little squishy body and sent it flying into the caverns below? How about any other boss in Elden Ring? This sharp cheddar requires a little know-how and luck, but is perfect for taking out a few bosses with little effort. Cheddar is easy, baby.

You can use this delicious Cheddar against the Valiant Gargoyle by positioning them between you and a ledge. They’ll eventually jump back in preparation for an attack and fall to their death. Use this against Radahn with his meteor attack. Stand near the water and he’ll fall right to his death.

Many bosses are programmed to not be able to fall, but that doesn’t mean it’s impossible. There is rarely a better feeling in Elden Ring than tricking a boss – especially a boss that doesn’t play by the rules – into falling to a quick and easy death.

These examples only scratch the surface of what cheese can do in Elden Ring. There are dozens of strategies, builds, and weapons that can make quick work of the bosses in the Lands Between. Finding these unique strategies can be more impressive than dodge rolling every attack in the game, from Margit to Malenia, after all.