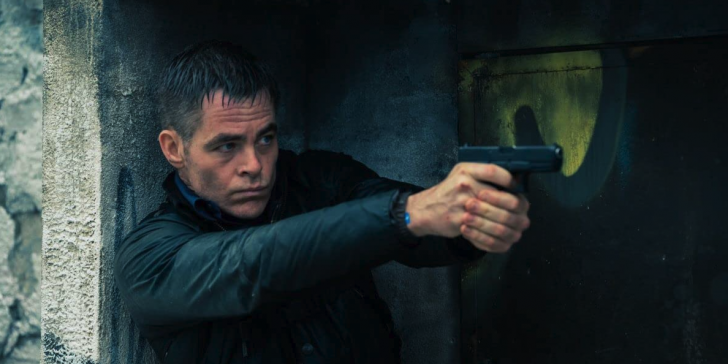 On first glance, it’d be easy to mistake The Contractor for a run-of-the-mill military action-thriller. The movie poster features a blue-eyed movie star wearing tactical gear, standing in front of an American flag — it doesn’t get much more generic than that. The trailer outlines the story of a desperate US Army veteran on the run from a shady private military company who’s hired him to do their dirty work. It looks like a shoot ‘em up laced with Bourne-style intrigue — and it is — but that only makes up 30-40% of The Contractor’s DNA. The rest consists of melancholy, the sort of disillusionment that drives one to depression rather than defiance. The Contractor is an action-tragedy, a deeply sad film about the industry of war, its disposable workforce, and its collateral damage both at home and abroad. It may not be visually or technically impressive, but it’s brutally honest and thematically rich, the sort of movie that’s bound to be overlooked and under-appreciated.

There’s No Such Thing as a Clean Kill

Here’s the part that’s basically boilerplate: Sgt. James Harper (Chris Pine, Wonder Woman 1984) is a career soldier, pushing 40 and struggling to keep his body in fighting shape when he’s unceremoniously discharged without benefits. To make ends meet, James follows his buddy Mike (Ben Foster, Hell or High Water) into employment with a private military company run by Rusty Jennings (Kiefer Sutherland, Designated Survivor). Rusty offers James “honorable work,” making big money while serving his country as part of a disavowed black ops team. He’s put on a plane to Berlin, where he’s assigned to spy on a virologist (Fares Fares, The Wheel of Time) who he’s told has ties to international terrorism, but soon he discovers that he’s been lied to about both his target and his employer. Now he’s the mercenaries’ new target, and he’ll have to fight through them to get home to his family.

The twist: Almost none of this is framed as cool or fun. Director Tarik Saleh and writer J.P. Davis take the saddest, most brutally honest approach to every story point. James is discharged for taking steroids to help rehab his injured knee, something which his previous commander encouraged but his new one won’t tolerate. He is an elite Army Ranger, but is deep in debt even before his discharge, barely making ends meet in his modest suburban home. Now, his wife Brianne (Gillian Jacobs, Fear Street) is terrified that he’ll end up a fatal casualty of post-combat trauma and depression, and James is afraid that she might be right. He’s not even too macho to get psychological help — he’s afraid that seeking it out will make him unemployable in the private military sector. At yet another funeral for an Army buddy who’s died by suicide, James hears about the lump sum his friend’s family received and you can see him doing the Willie Loman calculus. He’s spent his life killing, and now he might be worth more dead than alive.

Once he goes back to work with a PMC, there’s absolutely no glamor in it. He flies coach to Germany and sleeps in shitty hotels and storage units, and spends his days hidden in his target’s shrubs taking photos of the happy family. The operation James and his team are sent to complete is quick, clinical, and cruel. It takes a full hour for the bullets to start flying, and once they do, Saleh immediately signals that this violence will not be sanitized for your comfort. Innocent people will get killed, and you will look the victims’ families in the eye. The action is intense and legible, but not flashy. James Harper will impress you with his tactical brilliance and masterful violence, but there are more moments to pity him than there are to cheer him. There are few vicarious thrills here. This is an action hero who washes the blood off his hands and face using his own spit, who has to syringe pus out of his infected knee. This shit isn’t fun, and it shouldn’t be. I love a rousing dumbass action movie as much as the next person, but The Contractor is a valuable reminder that the real-life product of violence is misery.

Chris Pine’s quiet, understated performance is at the heart of the film. His character is working through physical and psychological pain and exhaustion, but he’s too stoic and professional to let it show most of the time. Up until he finally loses his shit towards the end of the film, it’s basically all in his eyes. Until then, James Harper is like a good video game protagonist, someone who doesn’t talk a whole lot or even change very much but who seems like more of a full character with each brief, episodic interaction. Gillian Jacobs gets only a few scenes in the first thirty minutes to flesh out James’ wife, Brianne. She’s exhausted from being afraid for her partner’s life continuously for years, a break from the Built Ford Tough Army wives found in Pentagon-approved Hollywood action movies. Ben Foster plays James’ closest Army brother, cashing in on their familiarity from Hell or High Water to the extent that it sort of feels like cheating. Clutch character actor Eddie Marsan (Atomic Blonde) has a brief turn as a veteran whose fear of lashing out at his family has forced him into seclusion, and Amira Casar (Call Me By Your Name) wrings a lot out of her small role as Sylvie, the wife of the scientist James has been sent to kill. No one sticks around for long, but everyone makes an impression and functions as a reflection of some part of James.

More than once, The Contractor got me thinking about the Metal Gear series.  Not in terms of its gonzo sci-fi anime aesthetic or penchant for metatext, but in its sober philosophizing on the self-perpetuating global war machine and its psychological impact on its combattants and victims. (Kiefer Sutherland even plays something of a Big Boss type.) Metal Gear Solid is famous for giving players the chance to understand the motivations and inner struggles of its antagonists — often only after the player has finished defeating them. This is a tall order in a grounded, realistic film, but The Contractor actually pulls off a scene in which James deals the killing blow to an opposing mercenary — not a main villain but an unnamed boot — and then sits and talks with him as he dies. They’re not actually enemies, they’re tools, assets being gambled in someone else’s game.

I don’t mean to oversell The Contractor as some sort of hidden masterpiece, because in a lot of ways it really is an average-quality action-thriller. You’ll note I’ve said very little about the visual style of the film, or about the staging of the action, or had more than a line or two to say about each performance or character. I’ve written mostly about tone and theme because that’s mostly what’s worth talking about. The Contractor is, more than anything, a mood, the action movie equivalent to one of the sad country songs that Chris Pine and Ben Foster listen to together in the car during the film. There is something to this movie that I think is kind of special, even if the whole isn’t totally worthy of it. I think it’s a drag that The Contractor is likely to completely disappear, while the movie at the top of the box office charts this week — which is, by all accounts, a godawful mess — is going to remain in the public consciousness for much longer. Someday, The Contractor will show up on streaming services with a generic cover image and a lousy Rotten Tomatoes score and be discovered by very few people. I’d encourage you to be one of them.