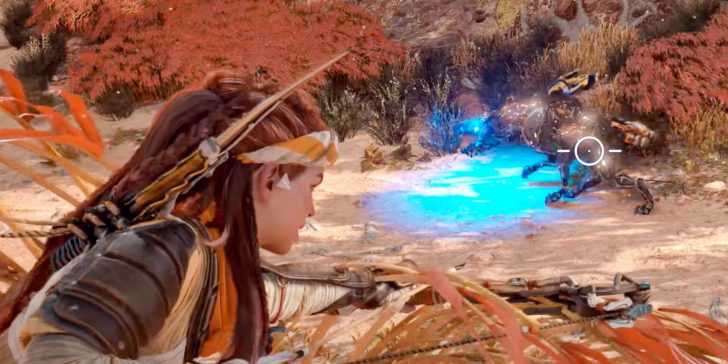 There are three Hunting Grounds Trials to complete in The Daunt region in Horizon Forbidden West, and there are three tiers of rewards for each one.

The Daunt Hunting Grounds Trials consist of three challenges that players can complete early on in Horizon Forbidden West for some valuable rewards. There are a total of four Hunting Grounds, each with three trials, and earning Full Stripes on all of them will award players with Tinker’s Pride, a Legendary Tripcaster. Along with one of Horizon Forbidden West’s legendary weapons, players will receive numerous machine parts, Metal Shards, skill points, and Hunting Medals for completing the trials.

Hunting Grounds Trials are timed-based challenges that range from stealthily looting caches to taking down multiple machines or inflicting status effects. Each Hunting Grounds area has three trials to complete for a total of 12 challenges. Players can earn Quarter Stripes, Half Stripes, or Full Stripes depending on how quickly they can complete a trial. Earning Full Stripes gives players the largest number of valuable rewards.

The first Hunting Grounds Trials players will come across are in The Daunt. The three trials in this area include shooting components off of Scroungers, overloading Scrounger Power Cells, and using environmental takedowns to kill electrified Scroungers. Players will need a weapon that does tear damage as well as a Shock Warrior Bow and Tripcaster shock traps. Once the necessary weapons are obtained, the Hunting Grounds Trials in Horizon Forbidden West’s The Daunt can be completed.

The second challenge for The Daunt Hunting Grounds in Horizon Forbidden West is the Shock Trial. Completing the Shock Trial involves overloading a Scrounger Power Cell so that it shocks another nearby Scrounger. Players will need to use a shock bow to complete this challenge, and a total of three enemies will need to be shocked by overloaded Power Cells. Near the entrance into the Hunting Grounds, there’s a group of three Scroungers fairly close together, so payers should be able to get the first two kills by sneaking up and overloading the one in the middle. The last kill can be performed by finding any of the other pairs of Scroungers around the arena. Completing the trial within three minutes will earn Full Stripes.

The last challenge in The Daunt is the Shock and Trap Trial. Using Tripcaster shock traps, players will need to shock enemies, then kill them with environmental hazards. There are plenty of hazards to be found around the arena, so players can set up a shock trap near one, then get a Scrounger to chase them. Once the Horizon Forbidden West machine is shocked by the trap, players can activate the environmental hazard by shooting it. Players need three environmental kills while Scroungers are shocked to complete this trial, and Full Stripes are awarded for finishing in under three minutes. Completing the Shock and Trap Trial is the final challenge in Horizon Forbidden West’s The Daunt Hunting Grounds.

Legends: Arceus – Which Pokémon Are Hardest To Find