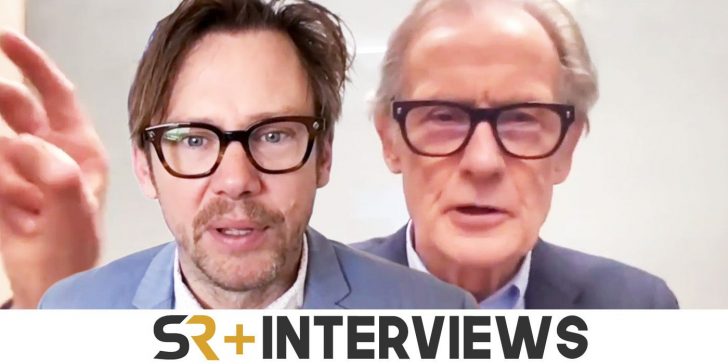 The Man Who Fell To Earth, which premieres on Showtime April 24, is simultaneously an adaptation and continuation of Walter Tevis’ watershed sci-fi novel. The original story, made into a film starring the iconic David Bowie several decades ago, follows an alien named Thomas Newton who arrives on Earth in search of water for his home planet. His story did not have the traditional happily-ever-after ending, and now a new alien named Faraday (Chiwetel Ejiofor, Doctor Strange in The Multiverse of Madness) has fallen to Earth to try and carry out Newton’s plan.

Part of Faraday’s mission is finding Justin Falls (Naomie Harris, No Time to Die), a scientist whose previous work may be the key to saving his home. Bill Nighy (Emma) has the honor of taking over Bowie’s role, now an older and more hardened Newton whose role in Faraday’s life is sure to be significant. Jimmi Simpson (Pachinko) plays Agent Spencer Clay, a man whose obsession with discovering the alien’s identity blinds him to nearly everything else.

Nighy and Simpson share their own experiences with Nicolas Roeg’s classic 1976 film, the weight of following in David Bowie’s legacy, and the mysterious motivations of their characters.

Walter Tevis’ novel is a cornerstone of sci-fi literature, but the Nicolas Roeg film with David Bowie is a cult classic as well. What was your engagement with the story in either medium prior to this series?

Bill Nighy: Yeah, I was around and a young man when the film first came out. It was a big deal in the so-called United Kingdom. I saw it maybe twice, maybe more, and I’ve seen it since over the years. I was a big fan of Nicolas Roeg and a big fan of David Bowie, so it was a must-see movie.

Jimmi Simpson: I had seen the film, thanks to a film school buddy of mine in the late 90s. But I hadn’t revisited it since, and I don’t think my mind really attached to it. It’s a very subtly told sci-fi story, and it doesn’t really have the typical three-act movie structure of completion and satisfaction in any way. And so, for some reason, it didn’t stick with me.

When this script came around and I happily revisited it, I’d lived a lot more life and I’d been human for much longer at this point. When you’re 25, you don’t know how difficult life is when you’re 45. You see this movie and you’re like, “Oh, my God. Of course.” And I was stunned by the beauty, because I’m a huge David Bowie fan as well. Starman is my go to karaoke jam. I was just stunned by the kind of naked – not literally – beauty of Bowie and his performance. He does feel like a child; he feels like David Bowie.

I didn’t know the book until the job came along. And then I started reading it when I got to London, and I was finished about halfway through our filming. It’s like, I’d seen Les Mis 5 times, and then I read the book. And I was like, “Oh my God!” Then you get the little nuggets of backstory, and it made the film so much more complete.

But I think what Alex and Jenny have done is they’ve made a pure sequel. We’re 45 years, literally and narratively, after this first film. They’ve really pushed it along, and they’ve taken a lot of amazing things. But they dive way deeper into the humanity, the struggles of being human and the joys of being human. You’re kind of outside watching the original film. In this show, you’re in there and living as all these different characters. They’re very fleshed out in a way that Roeg’s movie wasn’t, or I don’t think he even intended it to be.

And in this sequel, Bill, you’re stepping into David Bowie’s shoes by playing Thomas Newton. How much responsibility do you feel to honor his performance and his legacy while also making it your own?

I knew simply to do it as best as I could, and to kind of carry the job on. I’m not a continuation of David Bowie, but I was pleased to be thought of in terms of playing Thomas Jerome Newton, and to follow in his footsteps. And to try and imagine what 45 years of drinking gin and smoking too much have done to an alien trapped on Earth, trying to avoid the CIA. That’s enough to be going on with.

Jimmi Simpson: I can’t say this enough, but Alex and Jenny were very serious about choosing Thomas Newton, obviously. That day, Alex called me and said, “Bill Nighy might do it! He’s thinking about it.” And when he agreed, there was just this gasp of relief from the entire cast and producers and every. We got the real Thomas Newton. It was so exciting.

Jimmi, when we meet Spencer Clay, he’s trying to connect the original story to the sequel, just like the audience. Can you tell us about his motives and how they intersect with Faraday’s?

Jimmi Simpson: Slight spoiler alerts! Spencer Clay has a history of utter abandonment. He’s never known real love in his life, and he’s gone about fortifying himself through power and controlling others. He’s initially from a different country, and his mother was a straight up immigrant. It’s like a frat boy; you get hazed – I’m not one or wasn’t one, but – you get hazed, and you get beaten. And that just breeds a new contempt to do it to others.

He’s such a sad man. He’s lived out his life is that contempt, and he kind of goes about breaking others the way he feels like his mother has been broken. He fixates on Faraday as the ultimate illegal alien, and he’s been chosen almost religiously to stop the ultimate illegal alien. And so everything is invested: his own self-worth, his career – which is most of his self-worth. Every single sight is set on Faraday for him. It’s the only thing. It becomes his mission in life. He takes it to the extreme, and he does some desperate things.

Bill, I know you’ve worked previously with Chiwetel and Naomi. What was it like to have that kind of reunion on set?

Bill Nighy: It was very, very nice. I’m on very good terms with both of them. Chiwetel’s a friend of mine. I gave my heart to Naomi in Pirates of the Caribbean 2 or 3. Chiwetel and I did a very long-running theater play in London some years ago, and we’ve stayed friends.

It was he who originally approached me about playing the part, and I knew it had to be serious if he was involved. And we had fun. It has been a while since we’ve worked together, and it was great to be back. So, it was very satisfying.

The Man Who Fell To Earth Synopsis

An alien (Chiwetel Ejiofor) crashes deep into the oilfields of New Mexico with a mission: he must find the brilliant scientist Justin Falls (Naomie Harris), the one woman on earth who can help save his species. Even as he struggles to adapt to our world and to become more “human,” her faith in humanity couldn’t be lower. An unlikely duo, together they discover that in order to save his world, they must first save ours. An inspired continuation of the novel by Walter Tevis and the iconic 1976 film starring David Bowie.

The Man Who Fell To Earth premieres April 24 on Showtime.

Jon Bernthal Explains Why He Doesn’t Like Method Acting