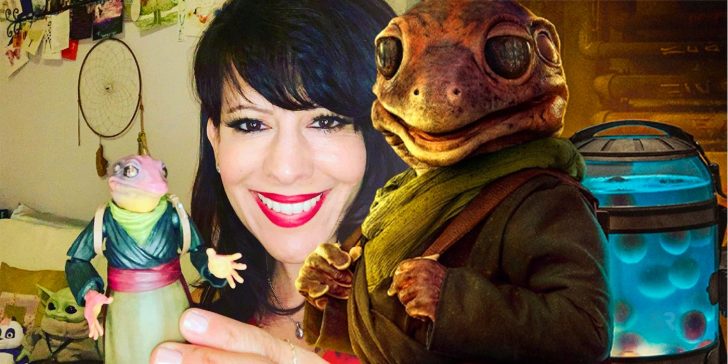 The Mandalorian actress Misty Rojas has shared an image of her custom-made Frog Lady action figure. Rojas has made a career as a stunt performer, appearing in movies like Jingle All the Way, Van Helsing, and The Hunger Games: Catching Fire. Most recently, she rose to fame by appearing in both seasons of Disney+’s The Mandalorian. Rojas was the stunt performer behind Kuiil in season 1 and later appeared as Frog Lady in season 2.

Since Nick Nolte voices Kuiil, Rojas is much more known for playing Frog Lady. The character was introduced in season 2 episode 2 “Chapter 10: The Passenger.” Peli Motto recruited Mando to transport Frog Lady in order to get information about a Mandalorian covert. Din Djarin reluctantly says yes, agreeing to transport her without jumping to hyperspace to keep her eggs alive. Things of course don’t go according to plan but after a crash landing on Maldo Kreis and a battle with a giant knobby white ice spider, Frog Lady is eventually reunited with her husband on Trask in the following episode.

Frog Lady and her offspring didn’t have a huge role in The Mandalorian, besides providing Grogu with a few forbidden snacks, yet that never stopped fans from creating custom figures, artwork, and merchandise for the innocent anthropoid. Rojas herself happened to get her hands on a custom figure from TimsToyz and made a post about how impressed she was on Instagram. The creator also shared a post at the beginning of March, capturing the moment he handed Rojas her custom toy. Both Instagram posts can be seen below:

Both Kuiil and Frog Lady’s story arcs seem to be complete, but The Mandalorian season 3 looks to be keeping up the tradition of including Rojas. The actress recently shared an image of herself in a Mandalorian season 3 shirt, indicating that she would be returning when the Star Wars series comes back. She didn’t reveal anything about her new or returning character in the now-deleted Instagram post, but the possibilities are endless since she has only acted as a performance artist thus far.

Frog Lady had gotten her own Funko Pop along with several other The Mandalorian characters, but she has yet to get a 3.75-inch figure. Star Wars figures date back to 1977, but Hasbro stopped producing the iconic 3.75-inch, 5 points of articulation figures after the release of Star Wars: The Last Jedi. In the past, dozens of side characters got turned into figures, but because of Hasbro’s focus on the higher quality Vintage Collection, fewer characters get the plastic treatment today. But with Rojas supposedly returning for The Mandalorian season 3, hopefully, she will get her own official Star Wars figure from Hasbro.