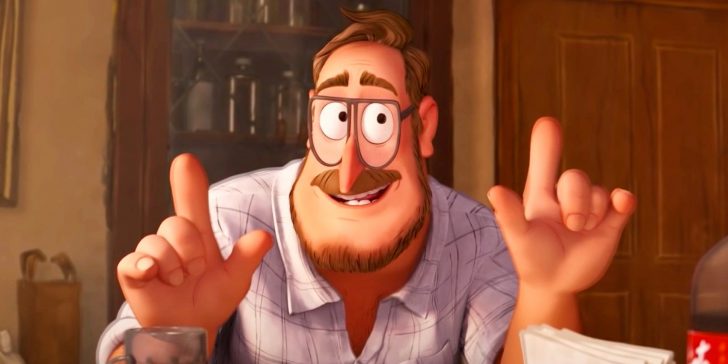 The Mitchells vs. The Machines director Michael Rianda’s father is revealed to be the inspiration behind character Rick Mitchell’s animated design.

The design of The Mitchells vs The Machines’ Rick Mitchell was based on the director’s father. The animated comedy film was released on Netflix in April 2021 to nearly universal praise amongst critics and audiences alike. It quickly rose the ranks of one of the most-watched Netflix films of the year, garnering a 97% Rotten Tomatoes rating, The Mitchells vs The Machines has also won multiple awards, including Best Animated Feature at both the 49th Annie Awards and the 27th Critics’ Choice Awards. The delightfully frenetic family film is considered a favorite among a tight crowd of strong nominees for Best Animated Feature at this year’s Academy Awards.

The Mitchells vs The Machines centers on Katie Mitchell (Abbi Jacobson), the eldest of two children in a quirky dysfunctional family, as they embark on a cross-country road trip to her new school. During their travels, an artificial intelligence of a popular Apple-like tech company becomes sentient and dispatches an army of robots to preserve their existence. Patriarch Rick Mitchell, voiced by Danny McBride, and his wife Linda Mitchell (Maya Rudolph) must keep their family safe while saving the world.

According to THR, the design of Katie’s father Rick in The Mitchells vs The Machines was based on director Mike Rianda’s real-life dad. The director said he put a lot of thought into each character in the film, and points to Rick’s wardrobe as being directly inspired by his father. Rick’s 1970s aviator jacket is an exact replica of one that Rianda’s father had when he was growing up. The illustrators and animators took great care in realizing it by adding specific crinkles and “hand-drawn swirls in the fur,” to make it look more like an illustration than CGI. Apparently, the resemblance is so close to the real thing, that Rianda’s father has had his The Mitchells vs The Machines lookalike pointed out to him by friends. Read Rianda’s quote about Rick’s design below:

“We wanted the characters to feel real and specific … and the way we did it was being observational … [The aviator jacket is] an actual jacket that my dad had when I was growing up. … It sort of puts him the past, because it’s a jacket from the ’70s … Even thought he’s a little rough around the edges, he’s illustrated with a lot of warmth … He’s injected with the love you would have for your own dad, even though you are aware of his faults.”

Rianda wanted to make sure that Rick’s rough emotional exterior in The Mitchells vs The Machines was illustrated with “warmth,” which he praised production and character designer Lindsey Olivares for capturing in the final product. As Rianda is paying homage to his actual father, he wanted Rick’s design to be seen almost through the eyes of a child. “It’s almost as if Katie…is drawing the characters herself,” he said, noting how the animated character was design with “love” in mind.

On the surface, The Mitchells vs. The Machines is a fun romp about destructive robots and society’s dependence on technology. But at its core, it is a heartfelt story about the importance of communication, family, and honoring those who would risk everything for a hug from their children. With its lovable characters and unique animation style, the film demonstrates that there’s nothing like the deep-rooted love that family can provide, and that sometimes, regardless of the smartphone in one’s hand, connection is the most important thing. Rianda’s real-life inspiration for The Mitchells vs. The Machines makes that all the more special.

Next: The Mitchells vs. The Machines Follows A Toy Story Easter Egg Trend