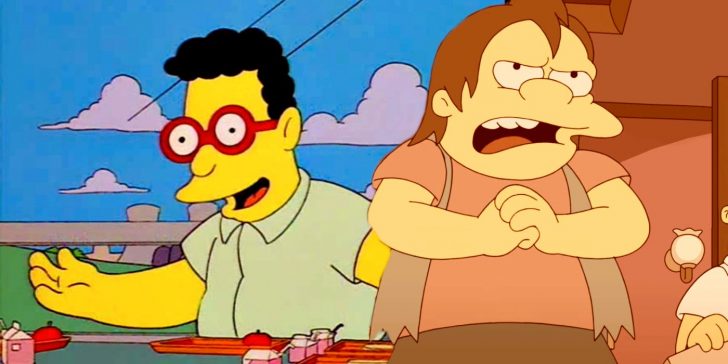 Nasal nerd Database is Matt Groening’s least favorite Simpsons character, but the sitcom managed to give him a cameo even Groening can’t fault.

For a second time, The Simpsons season 33 brought back Matt Groening’s least favorite character, Database, but this time the show made his appearance more palatable for the show’s famous creator. The Simpsons has a cast of thousands, meaning it is not uncommon for characters to be absent from the show for multiple seasons at a time. Particularly when The Simpsons’ celebrity voice cameos mean the series is constantly introducing more new cast members, it would be nigh on impossible for every character on the series to appear in every season let alone every episode.

Matt Groening famously hates Database, the nasally voiced nerd in Bart’s class. The character earned the impressive accolade, in the massive, sprawling cast of The Simpsons, of being Groening’s least favorite cast member on the show. Even with this lack of popularity, though, The Simpsons managed to bring the character back twice in season 33. However, despite featuring more often than many of Groening’s preferred creations, The Simpsons finally fixed Groening’s biggest issue with the character in Database’s second season 33 appearance

Much like The Simpsons brought back Bleeding Gums Murphy despite the character dying in season 6, the episode ”Pretty Whittle Liar” (season 33, episode 16) saw Database make a brief appearance. However, it was not until “My Octopus and a Teacher” (season 33, episode 18) brought him back as part of Lisa’s group of nature documentarians that The Simpsons gave Database a cameo even Groening could stomach. Although he still has a role in the episode, Database doesn’t have any dialogue, thus avoiding any lines from the infamously annoying voice. Given Groening’s famous antipathy towards Database’s jarring intonation, this approach allowed for the inclusion of an iconic character, without the fallout from his most irritating attribute.

Database’s intellectual rivalry with Lisa continues when he sneers at  Lisa intervening with the footage she’s filming as part of a nature documentary. Taking Homer’s classic life advice to heart, Lisa ignores Database’s disapproval by yelling that she’s technically part of nature too and therefore entitled to intervene in the documentary. Database provides no reply, resulting in a cameo from the character that even Matt Groening would struggle to find fault with, as the scene entirely avoids his grating voice. It is fortunate that The Simpsons found a workaround to allow the character to appear on the series again, as Database was central to some of the show’s most loved outings.

Database cropped up in the likes of “The Itchy & Scratchy & Poochie Show,” (season 8 episode 14) and “Lemon of Troy” (season 6, episode 24), the latter of which featured a DVD commentary wherein Groening’s dislike of the character was disclosed. While hardly as much of a publicity draw as The Simpsons’ celebrity cameos like Billie Eilish, Database is one of many minor background players who links contemporary episodes of the series with its 90s Golden Age. As such, it is a good thing that The Simpsons found a way to bring back the supporting star—even if he can’t open his mouth without irritating one of the show’s creators.