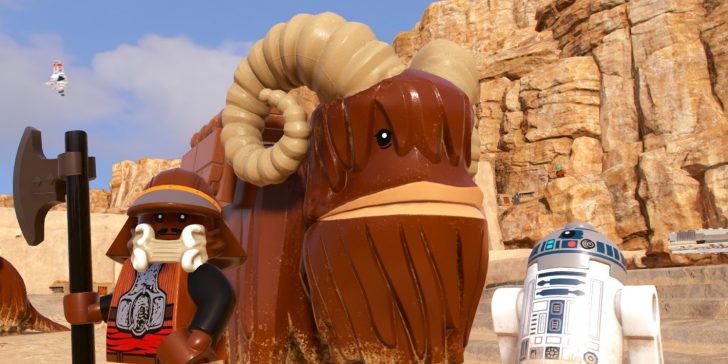 I’ve recently been rewatching old episodes of The Simpsons while playing games like Destiny 2, Hitman 3, and Elden Ring. As someone who doesn’t watch a ton of cable television, I was reminded the other day of a long-running television trope called a “clip show.” Essentially, it’s an entire episode dedicated to playing the greatest hits of a series without any real context outside of showing you funny moments you might remember. As I stepped away from playing a little over an hour of the upcoming LEGO Star Wars: The Skywalker Saga, I couldn’t help but feel like I just experienced the video game equivalent of a clip show.

Developed by TT Games, LEGO Star Wars: The Skywalker Saga has the daunting task of adapting the prequel, original, and sequel trilogies in a single game. Given how many iconic moments and characters exist in those nine movies, I wondered about how this adaptation would manage the monumental task of showcasing the entirety of the Skywalker Saga.

Briskly, is the answer. In just my preview alone, I almost completed the entire film saga’s worth of story with relative ease. Though I hardly stopped to take in the sights and smell the womp rats, I was surprised by how quickly LEGO Star Wars: The Skywalker Saga moved me along. Rarely did I get a chance to just exist in this colorful, plastic world as I was ushered between memorable story moments. It was a clip show, offering humorous twists on iconic Star Wars moments that were launched at me faster than a podracer.

LEGO Star Wars: The Skywalker Saga offers a fair amount of replayability and even multiple hub worlds where players can freely explore. These hub worlds can be anything from the sands of Tattooine to the bustling streets of Coruscant. Players can roam around as any character they’ve unlocked through completing puzzles, finding hidden secrets, or even partaking in the occasional sidequest. It’s a clear deviation from the previous LEGO Star Wars games’ formula of offering rather linear experiences. Being able to just take in the sights is fun, even if every other moment feels like a concentrated shot of nostalgia.

LEGO Star Wars: The Skywalker Saga is great for those who want to enjoy a fun, LEGO-fied version of the different trilogies as TT Games nails their specific brand of family friendly, pun-infused humor. The developer has also done a solid job of improving the core gameplay from previous entries in the LEGO Star Wars franchise, with combat getting a pretty obvious overhaul. Melee characters like Jedi can perform combos and counter attacks similar to the Batman Arkham games, although just mashing the attack button will ultimately let you beat most groups of enemies. Blaster-wielding heroes can now take cover and target specific body parts — such as a Stormtrooper’s helmet — to comically shoot it off. It’s a step up from previous LEGO games, as it makes the moment-to-moment gameplay far more engaging.

Another area that has been improved is the lightsaber boss battles. While I didn’t get to experience one myself, I was shown one prior to my preview session. Bosses now have a variety of attacks briefly telegraphed by red icons on the ground that indicate their direction. It’s very much a classic gamification of combat, but it’s cool to see that there are battles in which just mashing the attack button won’t save you. Players shouldn’t expect Star Wars Jedi: Fallen Order levels of complex lightsaber duels, but these battles will nicely break up your usual rhythm of smacking enemies, breaking items, and solving puzzles.

Enhancing this is an almost overwhelming amount of characters and skill trees for each archetype, which can be leveled up to unlock new abilities. Players can earn Kyber Crystals and LEGO Studs, which act as in-game currencies that can be found by either completing puzzles or literally destroying everything around you. There is a lot to do in this game if you’re a completionist or someone who needs to obsessively scour every level until they discover every secret (like me).

That being said, I worry those wanting to experience the main campaign of each movie only once will be left unsatisfied due to the rapid-fire nature of the storytelling. Much like a classic sitcom recap episode, LEGO Star Wars: The Skywalker Saga certainly won’t be for everyone. Yet, it’s also important to remember that these aren’t games designed to be deep, compelling narrative dramas. LEGO Star Wars: The Skywalker Saga appears to be more of a celebration of the film franchise’s best moments than anything looking to truly immerse you in its worlds. It’s this joyful playfulness that kept me engaged while playing, wondering what silly spin on a classic moment I’d uncover as I sped through the story.