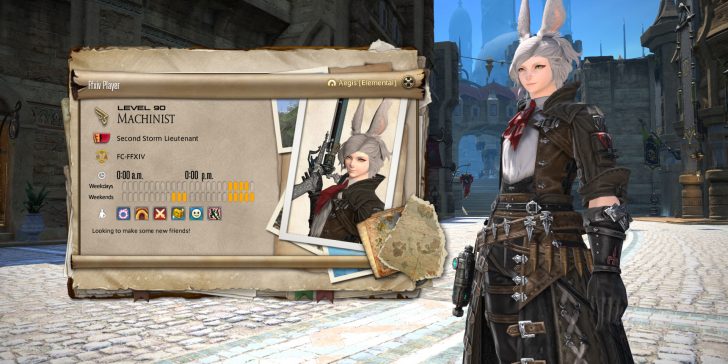 The new “Adventurer Plates” introduced to FFXIV in Patch 6.1 are a surprise hit among players. Though maybe they shouldn’t be. Not when you consider just how obsessed we are with Glamour — that system of making our characters look as sick, cute, sexy, or just plain funny as possible. Fashion is the true Final Fantasy endgame. Adventurer Plates just give us new and better ways to show off our outfits. I’m not just talking about clothes, either. Everything from character expressions to snide comments and preferred playtimes get reflected in the new “business cards” players can customize for others to see. And one tiny detail in particular gives new meaning to some old FFXIV content: Relic Weapons.

Y’see, it turns out Adventurer Plates don’t just show a perfectly still image. Not entirely. It didn’t take long for players to realize that glowy bits on your glowy gear continue to animate even while your character freezes. This is a minor factor in the overall plate, but an important one when you consider just how much damn work goes into getting these things. Sparkly, colorful weapons like these aren’t usually just any old thing you can pick up off a Primal corpse. They’re often purchased or crafted with tokens only available through difficult content. The most impressive of the bunch, however, are usually Relic Weapons: those extremely tedious-to-acquire tools tied to their own lengthy questlines.

I still don’t have that many myself. Not even after thousands of hours spent playing FFXIV since A Realm Reborn launched in 2013. That’s not because they’re necessarily difficult to acquire. They’re just a chore. Each one asks you to complete dozens of objects that often require farming thousands of total materials from various parts of the game. Some of these only need to be completed once; others need to be redone for every single weapon. The rewards are worth it, though. If sometimes only visually. Just look at my pretty Dark Knight sword below.

This isn’t even one of the higher-level versions of the weapon. Yet its blue, swirling aura is an instant badge of honor to both me and other players. Maybe they, too, know what kind of hell I walked through to get it. Maybe they see a big, shiny object and ask “How can I walk through hell to get my own?” Either way, it’s aspirational. It’s something anyone can spot at a distance and know there’s a bright marker for a somewhat exclusive club of players who know what to do and put the time in to do it.

Would these weapons still look good without the visual effects? Absolutely. Would it be the same? I don’t think so. Which is why I’m quite glad they work with Adventurer Plates. The entire point of these new virtual rectangles is to show off. Whether you’re bragging about your /gpose skills or your expensive in-game coat. There wouldn’t be much point if we couldn’t brag about some of our hardest won victories.

What’s more is that this actually gives us an all-new reason to hunt Relic Weapons in the first place. More chances to show them off inherently increase the flashy value of the items themselves. At least to me! There’s really not much reason to trudge through those old quests — meeting entirely new characters that don’t appear anywhere else — save for the flair. What once were the most powerful equipment in the game are now far out of date and only noteworthy for their unique luster. I personally want to see myself through Eureka, the Anima quests, the rest of the Bozjan Southern Front, etc. Now I have just that little bit more incentive to do so, too.