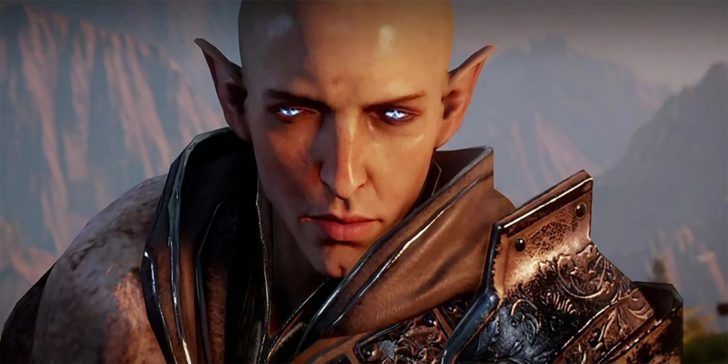 I’ll tell y’all now, I love Solas. Where many people rightfully want to punch the Dragon Age: Inquisition party member turned Dragon Age 4 antagonist in the mouth, he’s one of my favorite characters in a series I have become progressively less smitten with as years have gone by. And it’s giving me a lot of reason to consider buying this new statue of the elven mage available on the BioWare store right now.

The $125 statue is based on a tarot card the player sees in Dragon Age: Inquisition at the party select screen. Each party member is represented by a tarot card based on how far the player has progressed in their personal story. As a romance option, Solas has an additional card should the player choose to pursue him, and that’s the basis of the statue. That means it looks a bit different from much of BioWare’s statues, which are more or less based on the game’s photorealistic character design. Meanwhile, the Hierophant statue has more angular edges and even gets a little uh, liberal, with what hands look like. This does mean its stylized design might not be for those who want a more realistic-looking statue (one of those does exist elsewhere, although pricey). But I dig it as it looks like something that feels a little more in-universe, in a way? Like something I could imagine an elf in the Dragon Age universe carving based on legends of Solas. He is the Dread Wolf spoken of in the series’ elven mythology, after all. So it feels like it fits the setting in an interesting way. But that’s just me.

All that being said, this does mean I have to wonder if a similar statue of Dorian Pavus, my personal favorite character in the series, might be getting a similar statue in the future. While his romance wasn’t the most popular in Dragon Age: Inquisition, he is still considered a fan favorite, and I would love to see him get a tarot-card-style statue. I may have my issues with this series, but that man is always gonna be special to me. And I’d love to have a statue of him on my shelf.