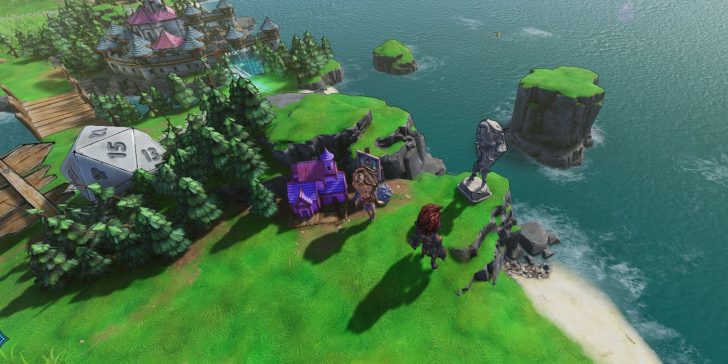 Remember Borderlands? The series is returning under a Dungeons & Dragons-inspired spin-off called Tiny Tina’s Wonderlands, combining orcs and magical abilities with the usual weapon mayhem folks know and love. This guide focuses on the Tiny Tina’s Wonderlands carve likeness in rocks objective, which is part of the In My Image side quest.

In order to start the In My Image side quest in Tiny Tina’s Wonderlands, you first need to progress through the main story until you finish the main mission called A Hard Day’s Knight. Once that’s settled, exit Brighthoof and head down the road, go past the die next to the directions sign, and turn around the corner toward the pink castle with the NPC.

The In My Image side quest in Tiny Tina’s Wonderlands task you to carve likeness on rocks around the Overworld. Let’s see what the steps are.

The first rock for the In My Image side quest is fairly straightforward, as it happens to be right next to the NPC. Go ahead and hit it with the melee button. That’s one out of three.

To get to the second location, right from where you just spoke to the NPC, head back to the road. Continue all the way straight and past the campfire on the opposite side of the die. This path takes you to the starting area of the Overworld — if you remember the Shrine of Mool Ah from the beginning, it’s towards that side of the map.

That’s two out of three, but there is still one item left to finish the Tiny Tina’s Wonderlands carve likeness in rocks step. Return to the previous spot and move towards Mount Craw. There is a bald NPC with an exclamation mark on their head. You have to complete this side quest in order to get to the third and final rock for In My Image. The Working Blueprint quest in Tiny Tina’s Wonderlands has you going inside a cave to recover a blueprint. The cave in question is found where you grabbed the carved the second rock.

There are two encounters inside, so prepare for a lengthy fight. After you’re done with both, you can grab the Bridge Blueprint from inside the chest. Head back to the NPC and give them the Bridge Blueprint for them to, well, build a bridge to the other side. From there, head over to the icy terrain and take the path that leads to the higher ground. You’ll find the third and last rock at the very end.

After going through the path, go ahead and hit the final rock with the melee button one last time. Make sure to get the chest on the left side, too.

Head back to Belvedance and talk to her to finish the In My Image quest in Tiny Tina’s Wonderlands.

Congrats on completing the Tiny Tina’s Wonderlands carve likeness in rocks objective for the In My Image quest! You can now go back to your main quest and do some actual hero shit (if you want to).