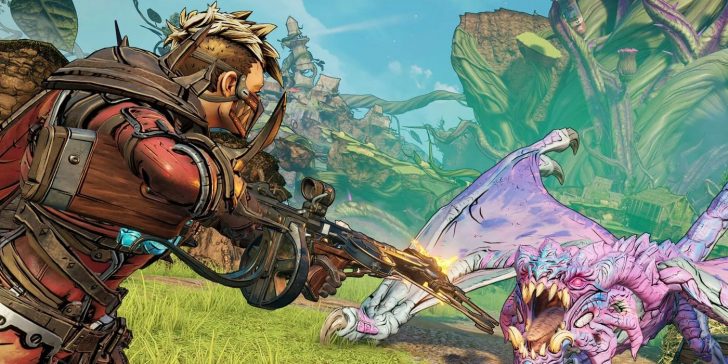 Remember Borderlands? The series is returning under a Dungeons & Dragons-inspired spin-off called Tiny Tina’s Wonderlands, combining orcs and magical abilities with the usual weapon mayhem folks know and love. This guide focuses on all the Tiny Tina’s Wonderlands class skill trees, including the class feats for reference.

Starting with the Tiny Tina’s Wonderlands class skill trees, the Brr-Zerker is your usual head-on DPS character. But aside from the mandatory Rage attacks, the class is tailored towards Frost Damage, which can be helpful in all sorts of situation due to its chance to freeze enemies on the stop.

Rage of the Ancients (Class Feat): Become Enraged, adding bonus Frost Damage to your attacks. Enrage Duration doesn’t deplete while an Action Skill is active, and ends if the Fatemaker enters Save Your Soul. Activating an Action Skill when already Enraged restores a portion of the Enrage timer.
Dreadwind (Action Skill): The Fatemaker spins, slashing anything nearby with their melee weapon and essentially becoming a pain tornado. Grants increased Movement Speed and Slow Immunity for a certain duration.
Feral Surge (Action Skill): The Fatemaker leaps toward their target, dealing Frost Damage to all nearby enemies. Any non-Boss enemies damaged are instantly killed if their Total HP is below a certain percentage. If Feral Surge kills an enemy, its cooldown is reset.

Blast Chill: Whenever the Fatemaker deals Melee Damage to an enemy, there is a chance to release a Frost Nova, dealing Frost Ability Damage to nearby enemies. Frost Nova cannot Critically Hit.
Iron Squall: Fire Rate is increased. Melee Attack Speed is increased. While Enraged, this effect is doubled.

Blood of the Fallen (Kill Skill): The Fatemaker’s remaining Action Skill Cooldown is reduced by a percentage. If an Action Skill is currently active, its duration is extended instead.

The second of the Tiny Tina’s Wonderlands class skill trees presents the Graveborn. This class is focused on dealing damage by sacrificing health, as well as having a Demi-Lich companion that attacks at range and deals Dark Magic damage.

Demi-Lich Companion (Class Feat): The Fatemaker is accompanied by a floating Demi-Lich Companion that targets enemies at range and deals Dark Magic damage. Whenever the Fatemaker casts a Spell, the Demi-Lich casts Hellish Blast, creating a homing projectile of the Spell’s elemental type, dealing damage to nearby enemies on impact. Any increases to the Fatemaker’s Damage also apply to their Companions.
Dire Sacrifice (Action Skill): The Fatemaker sacrifices some of their Current Health to deal Dark Magic Damage and apply Dark Magic Status Effects to all enemies nearby. Dire Sacrifice deals bonus damage proportional to the sacrificed amount of Health.
Reaper of Bones (Action Skill): The Fatemaker is fully Healed, gains Leech Efficiency, and deals Bonus Dark Magic Damage for a duration, but loses an ever-increasing amount of Health per second. When the Fatemaker would die, they become Invulnerable for a duration, restore some of their Health, and Reaper of Bones ends.

Dread Covenant: A portion of the damage taken by the Fatemaker is redirected to the Demi-Lich. When the Fatemaker reaches 1 Health, they immediately restore Health, sacrificing the Demi-Lich. This skill has a long cooldown.
Stain of the Soul: The Fatemaker’s Spells deal bonus Dark Magic Damage.
Dark Hydra (Kill Skill): Chance to summon a Dark Hydra Companion, dealing Dark Magic Ability Damage to nearby enemies for a duration.

Ascension (Kill Skills): Maximum Health and Spell Damage are increased for a long duration. This effect can stack.
Punishment: When the Demi-Lich casts Hellish Blast, there is a chance for it be cast again after a brief delay.

Lord of Edges: The Fatemaker gains increased Damage Dealt and Damage Reduction the lower their Health.
Blast Gap: Whenever the Fatemaker deals Spell Damage, there is a chance to create an explosion, dealing Ability Damage of the Spell’s elemental type to nearby enemies. The Elemental Explosion cannot critically hit.

Morhaim’s Blessing: Casting a Spell automatically activates all of the Fatemaker’s Kill Skills.

The third of the Tiny Tina’s Wonderlands class skill trees presents the Clawbringer. This class focuses on both Fire and Lighting types of damage, as well as having the company of a Wyvern.

Wyvern Companion (Class Feat): The Clawbringer is accompanied by a Wyvern Companion that flies through the environment and attacks enemies with its claws and Fire Breath. Any increases to the Fatemaker’s Damage also apply to their Companions.
Cleansing Flames (Action Skill): The Fatemaker summons their Hammer and slams it into the ground, dealing Melee Damage and creating a massive Fire Nova, dealing Fire Ability Damage to nearby enemies.
Storm Dragon’s Judgment (Action Skill): The Fatemaker summons their Hammer and hurls it, dealing Lightning Ability Damage to all enemies it touches. It sticks wherever it lands and deals Lightning Melee Damage every second to all nearby enemies. The Fatemaker can recall the Hammer, damaging enemies along its path, ending the Action Skill early, and refunding a portion of the cooldown.

Storm Smite: Whenever the Fatemaker activates an Action Skill, they call down Elemental Bolts that deals Fire Ability Damage or Lightning Ability Damage to all nearby enemies.

The fourth of the Tiny Tina’s Wonderlands class skill trees presents the Spellshot. This class focuses on casting spells much more frequently than the rest, and can equip a second spell in their inventory as well.

Imbued Weapon: Whenever the Fatemaker casts a Spell, their Guns deal Bonus Damage of that spell’s element for a short time. This effect stacks once per spell.
High Thread Count: Gain increased Max Spellweaving Stacks.
War Caster (Kill Skill): Whenever the Fatemaker kills an enemy, there’s a chance their weapon is instantly reloaded. This chance is increased per Spellweaving Stack.

Double Knot: Whenever you score a Critical Hit with a Spell, deal bonus damage equal to your gun’s element.
One Slot, One Skill: Gain increased Gun Damage per Spellweaving Stack.

Sever the Thread: Gun Critical Hits have a chance to instantly reset all Spell Cooldowns. This skill has a short cooldown.

The fifth of the Tiny Tina’s Wonderlands class skill trees presents the Spore Warden. This class focuses on ranged damage, being able to switch between an Ethereal Bow and Frost Cyclones, as well as having the company of the Mushroom Companion, who can deal poison damage.

Quiver of Holding: Magazine Size is increased. The Fatemaker’s currently equipped weapon regenerates ammo over time.
Medicinal Mushroom: While the Fatemaker is in Save Your Soul, their Mushroom Companion attempts to revive them. If it does, you and your Companion gain increased damage dealt for a duration.
Windrunner (Kill Skill): Increased Movement Speed and Fire Rate for a duration. This effect can stack.

Thrill of the Hunt: Gun Critical Hits grant increased Companion Damage for a duration. This effect can stack up to 10 times.
Called Shot: While aiming down sights, the Fatemaker gains an ever-increasing amount of increased Gun Damage and Damage Reduction.

Wrath of Nature: Whenever the Fatemaker deals Ability Damage to an enemy, the affected enemy takes increased Damage from all sources for a duration.
Headhunter: Gun Damage dealt to Critical Hit Areas is increased.

Play the Angles: The Fatemaker’s Gun Critical Hits have a chance to Ricochet, dealing reduced Ability Damage to a nearby enemy. Ricocheted shots have a small chance to ricochet an additional time.

The sixth of the Tiny Tina’s Wonderlands class skill trees presents the Stabbomancer. This class focuses on critical hits, as well as being able to turn invisible for stealth attacks, which is a welcoming change of pace.

Nimble Fingers: Whenever the Fatemaker deals Melee Damage, their Fire Rate and Spell Damage are increased for a duration.
Shadow Step (Kill Skill): The Fatemaker’s next Melee Attack is a guaranteed Critical Hit for a short duration.

Sneak Attack: Critical Hit Damage is increased.
Elusive: You can now shoot and Sprint at the same time. Gain a chance to Evade incoming damage while moving. The faster you move, the greater the chance.
Contagion: Whenever the Fatemaker applies a Status Effect, there is a chance it spreads to nearby enemies. If no enemies are nearby, deal a percentage of the Status Effect’s total damage to the enemy instead.

Executioner’s Blade: Gun and Spell Critical Hits have a chance to create a Ethereal Blade above the target that impales them after a short delay. Ethereal Blades deal Melee Damage based on the Fatemaker’s equipped Melee Weapon.

Have fun choosing your class!