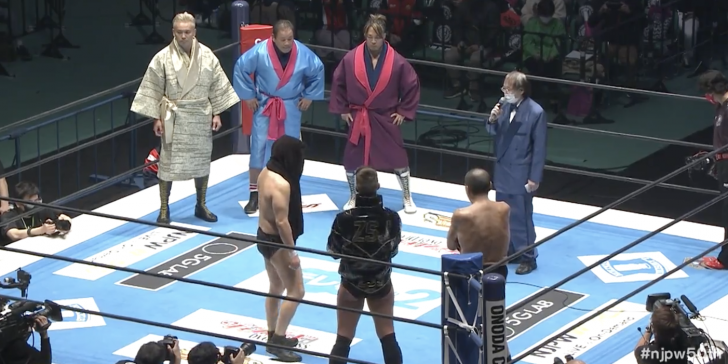 New Japan Pro Wrestling currently has a complicated relationship with its history.

The company has existed for half a century now, having spent most of that tenure as the leading wrestling promotion in Japan. New Japan’s grip on the top spot in Japan has rarely wavered in any quantifiable way. In those fifty years, it has reached multiple different peaks of popularity, critical acclaim, and financial success.

I think it’s fair to say that the 2020s have not been indicative of the highs that New Japan is accustomed to.

It doesn’t help things that New Japan is coming out of one of their most acclaimed periods ever. The Bushiroad era of New Japan has been high on the pedestal of the wrestling industry since the Rainmaker Shock of 2012. In the years since, the company became the favored darling of the hardcore fandom in the West, helped by renewed attention from the likes of Dave Meltzer. The company found itself positioned as the place to find Great Wrestling, a reputation that they more than rightfully earned in the 2010s.

Following such a strong period with hollow stadiums and crowds officially mandated not to cheer is far from the ideal that New Japan imagined. While their financial and cultural grip on Japanese pro wrestling remains unchallenged, the past few years have been rife with struggle.

A large part of that is due to the COVID-19 pandemic. The restrictions on travel and crowd capacity have affected the company’s business model in unfavorable ways. Working with a gutted roster while doing twice as many events to compensate for limited crowd capacities means that the product has suffered. Too many shows that feel meaningless, too many once major events stretched thin. There’s so much more of New Japan than there was before, but less of it feels interesting and meaningful.

At the same time, the issues brought about by the pandemic are only compounded by what feels like stale creative. Kazuchika Okada reigns over the company again as the IWGP World Heavyweight Champion, having already broken every record imaginable in his 2017 reign. The once beloved Bullet Club feels long past its expiration date with a lineup shakeup doing little to refresh the faction. Meanwhile their most exciting foreign wrestler in Jay White has been based in the States for the last year or so, with the divisive Will Ospreay holding down the fort in Japan.

New Japan’s in a creative rut, but it clings to the top spot through sheer inertia. When one speaks of New Japan at its best, images of Okada and Tanahashi in the mid-2010s come to mind far sooner than thoughts of Okada and Ospreay. Put another way, New Japan’s standing on the shoulders of its own history instead of continuing to blaze new chapters of greatness for itself.

That’s what brings us to the 50th Anniversary Show on March 1st at the Nippon Budokan.

In the main event, a six-man tag that featured Kazuchika Okada, Hiroshi Tanahashi, and Tatsumi Fujinami taking on Minoru Suzuki, Zack Sabre Jr., and Yoshiaki Fujiwara. Tatsumi Fujinami’s roots in New Japan run deep. He wrestled in the first ever match in New Japan history, and his main event run through the 80s and 90s cemented him as one of the most beloved wrestlers in all of Japan.

Fujiwara has a similarly storied relationship with the company. He’s one of the first ever graduates of the famed New Japan dojo, and has fought both for the company’s honor (such as in the famed 1980s faction warfare against Riki Choshu’s forces) and invaded it from without (such as in the original UWF/NJPW interpromotional rivalry).

Having Fujinami and Fujiwara involved in this match is a win. This match is nowhere near as great as it is without those two being in the ring. On top of both their contributions to New Japan being well worth celebrating, the nostalgia that these two bring to the match can not be understated.

Nostalgia in wrestling is a fascinating thing. I think the WWE has poisoned that well for a lot of fans. Between their spiteful unwillingness to create new stars and their ham-fisted overreliance on parttime acts from bygone eras, WWE has done a lot to paint nostalgia as an innate enemy in wrestling. The reality is that nostalgia, as with any other tool in professional wrestling, can be deployed well and even elevate things beyond what they might have been.

The 50th Anniversary Show main event feels like nostalgia done completely right. As a result, what we get is one of the best New Japan matches of the decade. It’s one that I would proudly hold up against a good majority of the company’s major IWGP Title matches of the last two years.

The first reason for the match’s greatness that comes to mind is Yoshiaki Fujiwara. Fujiwara’s performance in this match as a grumpy, petty, hate-filled old man might just be one of the best in-ring performances I’ve seen all year. It’s one that truly needs to be seen, if only to bask in the power of it.

Fujiwara has always been a charismatic performer, and while age has dulled his mechanical ability, it has done little to mute his personality. Here’s a man whose first offensive move in the whole match is slapping his own partner for committing the crime of not being as cool as him. Everything anyone needs to know about Yoshiaki Fujiwara for this match is that he’s able to convincingly pull rank on Minoru Suzuki.

Of course, I would be remiss not to mention Yoshiaki Fujiwara’s resilient skull. Perhaps the most memorable moment of the match for many comes when Okada attempts an early headbutt on Fujiwara, only to retain damage as Fujiwara smugly smiles on. To further demonstrate the power of his head, Fujiwara pulls back the cover from a steel turnbuckle and headbutts the thing twice. He grins through the whole thing.

Headbutting a steel turnbuckle twice just to no sell it is a power move the likes of which I have yet to see anywhere else in pro wrestling this year. Just effortless, awesome coolness from a 72-year-old man.

The other elder statesman of the match, Fujinami, does well here also. His performance doesn’t carry quite the same potency as Fujiwara’s, but he’s good in his own right. There’s a gravitas to his presence and he hits all his key spots in this match without much trouble. Sure, his headlock takeover isn’t the cleanest thing in the world anymore, but the match isn’t going to live or die by how clean Fujinami’s execution is.

If anything, Fujinami sets off one of my favorite moments in the match. In a big babyface comeback, Fujinami hits Suzuki with his patented dragon screw leg whip. Tanahashi nails his own dragon screw on Zack right after. Okada finds himself in a position to do the same to Fujiwara but instead chickens out to hit a weak elbow to the knee instead.

As someone that’s been incredibly frustrated with Okada’s presentation and in-ring work over the last few years, there’s something incredibly validating about that spot. Seeing him fail to live up to the heroes of the past feels like an honest summation of where New Japan is right now. With all eyes on the company trained on Okada, he just can’t quite reach the levels of his predecessors. A damning statement against the supposed ace.

That’s just my silly read on the thing though, even Okada fans can like it as a fun little comedy spot in the match.

And to be entirely fair to Okada, this might have been one of his best performances of the decade yet. Opening the match with Zack Sabre Jr. forces him to break from his more lethargic opening mat work. Having someone like Zack push the pace on the match and actually wake Okada up does so much to liven this up. Later, when he’s called to do so, Okada’s elbow strikes (which are a general weakness of his game) land more than they don’t. His inevitable victory is also kept concise, with a tad of generosity thrown in as well. It’s a big save from Fujinami and Tanahashi that provides an opening for Okada to finally take down Suzuki.

Really, all the things that make this work so well are the points in which this goes against the idea of the Bushiroad epic main event.

For one, it harkens back to a time when multiman tags actually meant something in New Japan. Fans of the Bushiroad era have understandably dismissed most six and eight-man tags in New Japan as just filler matches to pad out longer cards or to main event inconsequential Road to shows. But looking at New Japan’s history shows that the multiman tag was once a powerful and key aspect of the product. Just look at the company’s various interpromotional feuds through the years for proof of that.

Secondly, having three hardnosed grapplers on the heel side of things helps break the monotony of the opening minutes that someone like Okada especially seems prone to fall into. There’s really no time to rest on one’s laurels when Zack Sabre Jr. is tying you up in knots.

Third, the bloated and dreaded epic runtime has no room here. This is a smooth and perfectly paced 18 minutes. Every segment has something to offer whether it’s comedy, stiff strikes, or slick grappling. There’s no room for fat here, only a joyous celebration of all the things that made New Japan wonderful at one time or another.

In many ways, it’s a rejection of what New Japan is now, and a return to what it was at its best. It’s a reminder that the ways of the past can still work. There’s room for tag team wrestling, there’s room for light humor from even the most serious of workers, there’s room for simplicity and compact runtimes. These are all things that New Japan has done excellently in the past, yet somehow has lost sight of in recent years.

In fact, it seems to be a concerning trend in my own experience with New Japan that the very best matches they’ve hosted this year seem to be conscious denials of their current in-house style. Where Katsuyori Shibata took a no nonsense and violent approach to rebuking the New Japan product at the Tokyo Dome, these six go a more playful route. It’s a match that’s free of expectation and burden, no one’s watching this waiting to throw five stars at it. That freedom unwittingly unlocks the greatness beneath, as six wrestlers with a variety of strengths and weaknesses get to put on something that does everyone involved a favor.

It really is a beautiful thing, one that I doubt the company can top in the year to come. A match so pure and joyful, something that’s become a rarity in 2020s New Japan.