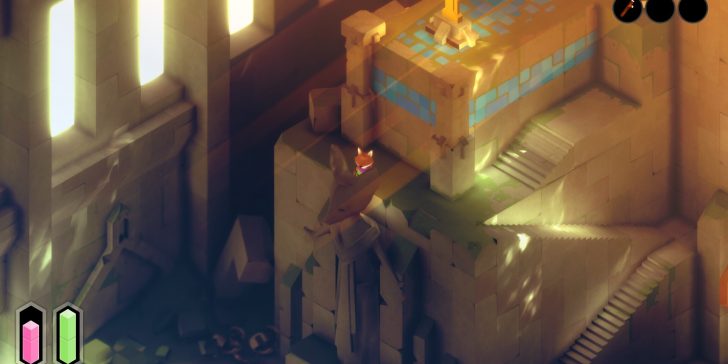 I grew up playing Super Nintendo games. For years, my brother and I would regularly enjoy exploring and beating levels of Super Mario Bros. 3, Zombies Ate My Neighbors, and EarthBound. In a time where the Internet was still in its infancy, each secret path, item, or cheat code would be meticulously documented within several folders filled with notecards and scraps of paper. My childhood consisted of discovering and memorizing unique aspects of each game, but as I grew older, I lost that sense of accomplishment when game information became readily available. And then I played Tunic.

Developed by Andrew Shouldice and published by Finji, Tunic draws heavy inspiration from the NES-SNES era, particularly from The Legend of Zelda. Players take control of a nameless Fox wearing a green tunic. After being washed ashore on a strange beach, they must uncover the mystery of the island while collecting powerful items. In short, it’s a successful form of flattering imitation of The Legend of Zelda.

Tunic centers around exploration and discovery. Players never receive clear directions or specific goals aside from vague hints like “Ring the East and West Bell” or “Collect three gems,” and that’s precisely why I love this game. Just like the SNES titles of my childhood, I spent the entirety of my playthrough making mental notes of specific locations, obstacles, or items, as each discovery gave me the same childlike sensation of not knowing something but feeling driven to figure it out.

And this is where the inspiration from The Legend of Zelda is strongest. Tunic’s greatest strength is that it requires players to continuously learn as they play. Signposts and item descriptions are filled with runic text consisting of shapes that resemble objects like a sword, and it’s up to the player to either use that specific item to discover its use or travel in the direction of the signpost. Tunic is ambiguous with its initial instructions and goals, but once I figured out how different aspects of the game worked, I experienced a level of jubilation that games haven’t given me in decades. New pathways opened after I prayed at varying monoliths, my character grew stronger after throwing certain items at idols, and I could teleport between locations after praying on yellow tiles. I discovered all of this on my own through trial and error.

Even though Tunic expects players to unravel these mysteries, it provides occasional assistance. Keeping with the nostalgic theme, you can collect pages of a manual that mimics traditional game guidebooks. Since the text consists of runic symbols, it relies heavily on imagery to convey its messages. And because Tunic wants you to uncover each mechanic, each page or picture will only provide hints for an area, item, or landmark. For example, I collected a page which consisted of a map for an underground tomb with a blue lantern placed on top. The lantern is crucial for exploring dark areas but is only available after finding it within a well. While I would’ve eventually collected the lantern, the manual page provided a constant reminder that I would eventually need this item.

Even Tunic’s dungeons serve as homages to The Legend of Zelda. Each area includes alternate paths that lead you to shortcuts, collectibles, or shrines that restore your health, magic, and potions. While pathways leading to the end are relatively straightforward, manual pages with specific maps encourage you to explore and locate hidden treasure. Each dungeon is uniquely designed to completely differentiate itself from the last. From an abandoned library to an underground quarry, Tunic’s locations create the same sense of wonderment I felt when unlocking the secret to an unknown mechanic as a child.

That feeling only heightens after you defeat each dungeon boss, for Tunic is deceptively punishing with its combat. It’s relatively simplistic⁠ — you attack by throwing consumables, using magical items, or swinging your sword three times. However, enemies deal significant damage, forcing you to evade most attacks. Even though you can find a shield, its primary use is for blocking ranged attacks since using it in melee will quickly drain you of your stamina.

Like in Death’s Door, mobility is key here, especially when fighting large bosses with unblockable attacks. The dodging mechanics are fluid and enemy attacks are wonderfully illustrated so that the player always knows when a specific move is occurring. But the window to evade can sometimes be so egregiously small that I died numerous times on several bosses. It didn’t matter if I memorized their patterns — the reaction time to dodge created such a disconnect between me and the game that I needed to take several breaks to decompress and rest my hands.

I would be remiss if I didn’t discuss Tunic’s accessibility, particularly with relation to its combat. Unfortunately, Tunic lacks key accessibility features like control rebinding on console and the capability to toggle locking on and sprinting. Yet it provides two accessibility options that drastically reduce fatigue and physical strain, so much so that they transform the game from a severely challenging action game to a relaxing adventure simulation.

“No Fail Mode” removes damage entirely, making the player completely invulnerable. Enemies and bosses still need to be damaged, but this option allowed me to calmly defeat a boss if I was too tired after an extensive gaming session. “No Stamina Restrictions” lets players continuously dodge without needing to rest to regenerate their stamina bar. This is especially beneficial when a group of enemies surrounded me, as it was much more conducive to my needs to keep rolling without waiting to get more stamina.

On several occasions, I would activate the “No Fail Mode” just to play Tunic as an adventure game, instead focusing on exploration and solving puzzles. Since these options can be toggled at any time, this level of freedom ensured I could play when I wanted instead of during my peak strength levels. As someone with a physical disability, I’m immensely appreciative of these options.

In short, Tunic is the culmination of my childhood game experiences seamlessly mixed with modern accessible innovations. While I was rewarded for every discovery, I never felt pressured to explore a new dungeon or fight a specific boss. For me, Tunic is my comfort game ⁠— a title that lets me relive the best parts of my childhood without fear of my disability preventing me from completing an objective. In an age where games are desperate to deliver new mechanics and innovations, it’s refreshing to play something so charmingly simple and nostalgic.