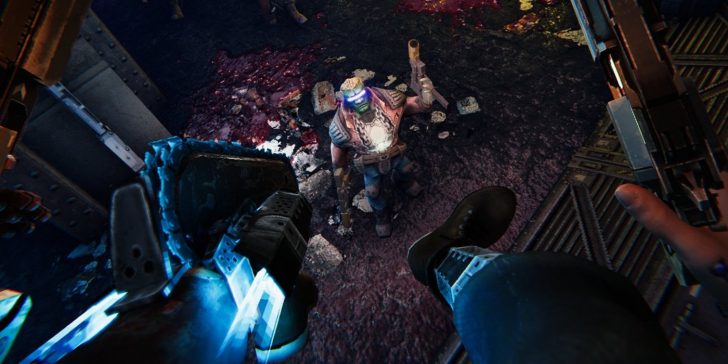 I thought the novelty of having a chainsaw attached to one of my legs in Turbo Overkill would wear off quickly.

Some elements among the dozens of throwback shooters out there are immediately familiar. Wall riding, not having to reload your weapons, double jumps, and a dodge button that you can also use in mid-air are some. Others, like sliding on the floor, which can be seen in the likes of Apex Legends and Fortnite, are so common that they’re practically staples. Developer Trigger Happy Interactive presents a twist in the new Turbo Overkill by adding a chainsaw to the equation, making it so your slide inflicts damage. While this is a promising pitch on its own, sliding down ramps and staircases while killing enemies isn’t just a great addition⁠ — it literally turns the experience into a Tony Hawk game.

Released in Early Access on April 22, Turbo Overkill has all the aforementioned elements integrated into its core. For someone like me who’s played everything from Doom Eternal to Dusk and Ultrakill, I felt right at home soon after booting it up, for better or worse. Fortunately, it didn’t take long for the game to introduce me to its unique slide mechanic and shake things up. Hurting enemies with an evasive movement seemed useful, so I used it as I roamed around a few corridors to see it in action. But it wasn’t until I got to the first arena in the game, which was a literal skate park, that I fully understood what the developers were going for.

On paper, all you do is press the crouch button while moving⁠ — that’s all it takes for the protagonist to lift his leg and aim in front of him with a chainsaw while sliding. But if you have enough speed or height, the action is done much quicker. The skate park served as a showcase of the way momentum works if you time it right, allowing me to slide across the room from one end to the next while cutting enemies in half, creating a satisfactory sequence each time.

While throwback shooters often stand out by making you constantly move to avoid enemy attacks, here I’m jumping up into the air and throwing myself at the faces of enemies all the time. The genre’s own nature pushes me in that direction, with the slide acting as an essential part of my weapon roster rather than just a movement option. I can slide to get away from enemies, sure, but that leaves me exposed to projectiles from behind. But sliding toward enemies gives me full control of the situation. I can do it while reloading, and I can create my own ramps in mid-air by following a timed jump with an immediate slide to parachute myself towards an enemy.

Turbo Overkill acknowledges that none of this would be as engaging as it is without the proper level design to support the movement. It’s not enough to have big, open areas where there’s nowhere to hide, as tends to be the norm. Like the skate park at the beginning of the game, most areas offer structures from where you can slide down. It’s done in a clever way so you’re not always facing the same layout or very obvious ramps, but it also didn’t take long for me to start recognizing which parts of an area I could use to move around at full speed. Like real skating, it takes time to master but there is plenty of space to practice.

Sliding is rewarding enough by default, but there are upgrades to purchase from vending machines around the levels. You can make it so that killing enemies with your slide heals you or provides armor, but it’s also possible to improve the action itself, increasing the boost when you activate the chainsaw leg, its damage, or even decreasing the time between accelerating and decelerating. While throwback shooters tend to leave progression for weapons alone, here it’s you who’s becoming faster and deadlier over time. In turn, learning how to make the most out of your navigation through levels becomes immediately rewarding.

Turbo Overkill‘s chainsaw-imbued tricks may end up in more gruesome results than regular skateboarding, but the invitation to embrace momentum is there from the very beginning, and it works extremely well within an already fast-paced genre that encourages traversal. I’ve spent entire encounters just moving left to right, killing as many enemies as possible while quickly evading out of danger, all without firing a single bullet. Even in its current stage in Early Access, Turbo Overkill‘s levels feel like their own playgrounds — the DNA of that first park is printed in every corner, waiting for you to hit the ground running quite literally. You may not be able to hear tracks from Lamb of God or Less Than Jake in the background, but the rebellious spirit of Tony Hawk lives on in every ollie you make over somebody’s skull.