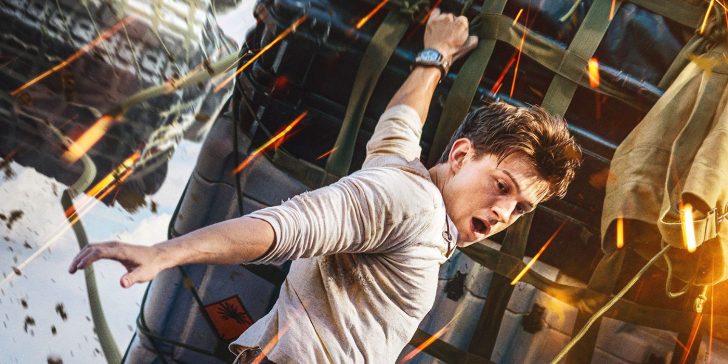 Uncharted director breaks down the plane stunt shown in the trailers, which feature Tom Holland’s Nathan Drake jumping on cargo boxes in the air.

Director Ruben Fleischer breaks down how the plane stunt scene from his upcoming movie, Uncharted, was filmed. Uncharted sees Tom Holland star in the leading role as adventurer and explorer, Nathan Drake. In the film, Drake is recruited by his mentor, Victor Sullivan (Mark Wahlberg), to locate the fabled treasure of the Magellan expedition. Along the way, Drake will have to race against Santiago Moncada (Antonio Banderas) and Jo Braddock (Tati Gabrielle) to get to the treasure first.

Sony’s latest film is based off of their video game series of the same name, which was developed by Naughty Dog studios. The action-adventure game series first released back in 2007 for the PlayStation 3, under the name of Uncharted: Drake’s Fortune. Since then, the series has expanded to three additional sequels, ending with Uncharted 4: A Thief’s End in 2016. The entire series has been universally praised by fans and critics, as well as shipped more than 41 million units, easily making it one of the best-selling video game franchises of all time. Every new entry in the Uncharted franchise has seen Drake on his hunt for treasure, while also coming face-to-face with plenty of action sequences. It seems the upcoming film will follow in those same footsteps.

Related: How Much Uncharted Cost To Make (& How Much For Box Office Success)

Speaking on ComicBook.com’s Phase Zero podcast, Fleischer dishes out how the Drake plane stunt from his Uncharted movie was filmed. Utilizing “robotic arms,” known as “KUKA arms,” the stunt team suspended boxes in the air. They then programmed the arms by a computer so that they had “synchronized movement.” From there, the team rigged Holland to the cargo boxes “on wires to traverse those boxes.” See Fleischer’s break down of the plane stunt scene from Uncharted below:

“That sequence was always one of my favorites from the video game franchise. And when I read the script and saw that it’d open with that, I was just so stoked. The way that that was shot was actually pretty cool. I’d never done anything quite like it.

There’s these things called KUKA arms, which are robotic arms that you would see on the floor of a car factory. And we were using them to suspend the boxes. And there was five of them and they’re all programmed by a computer so that they have synchronized movement. And they were able to do that fishtail thing. And we could stack them vertically, so they had a bit of a descent which allowed gravity to help us out.

Our second unit director, Scott Rogers, who was also our stunt coordinator, is a master with rigging. And so, putting the cast and the stunt guys on wires to traverse those boxes. It was shot in the parking lot outside of the stages in Babelsberg. And then, we composited in the background.”

Fleischer further explains that the entire sequence was “one of [his] favorites from the video game franchise,” and he was “so stoked” when he read the script and saw the sequence would open the film. The movie sequence was also unique in that the director has “never done anything quite like it.” This is particularly of note considering the fact that Fleischer’s resume includes other action titles, such as Venom and Zombieland. Adding to the movie magic, while the scene is set high up in the air, it was actually filmed in the parking lot of the stages in Babelsberg; however, the team “composited in the background.”

Fleischer’s fondness for the same sequence from the Uncharted video game series should give a lot of hope to fans. As the film’s director is a fan of the game series himself, it also appears the movie will indeed feature a few key action scenes from the games as well. Therefore, fans eager to see their favorite game series come to life on the big screen can look forward to watching Uncharted in theaters once it releases on February 18, 2022.

Next: Why Uncharted’s Reviews Are So Terrible

John Deloss is a freelance entertainment writer for Screen Rant, having just recently joined the team. A California State University, Fullerton graduate with a B.A. in English, John is an aspiring writer hungry to make a name for himself — emphasis on hungry. When he’s not behind a keyboard, you can find him out on the trail backpacking or at home brewing beer.