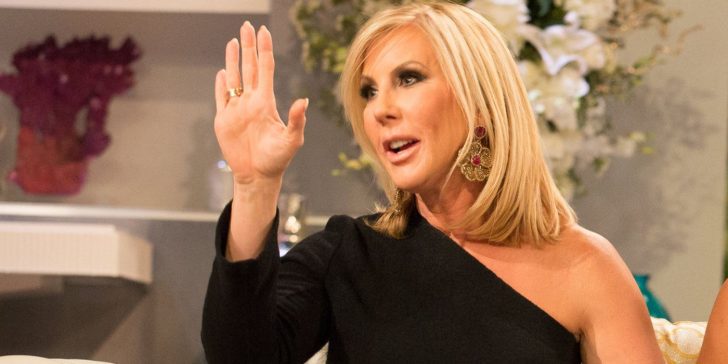 RHOC alum Vicki Gunvalson explains her previous comments about having cancer and clarifies the misinformed reports about her battling the disease.

Former The Real Housewives of Orange County star Vicki Gunvalson has clarified the false news about her health after previously saying she had cancer. In November 2021, Vicki appeared on Jeff Lewis’s SiriusXM show and briefly mentioned her secret battle with cancer. During their discussion, Vicki said she had cancer and had her whole uterus taken out. However, The Real Housewives Ultimate Girls Trip star did not provide additional information about her health. Also, neither Jeff nor other guests on the show questioned her for further details.

Vicki’s comments about her health came as she discussed her relationship with her controversial ex-boyfriend Brooks Ayers. In 2015, Ayers admitted to forging medical records to prove he was a patient at the City of Hope cancer hospital. However, he confessed that he acted alone and without Vicki’s knowledge. Vicki broke up with Brooks that same year after dating him for five years. Afterward, reports revealed that she sued him over unpaid loans.

Following Vicki’s comments about having cancer during her appearance on Jeff’s show, multiple misinformed reports about her health have been made. The 59-year-old reality star clarified the false information in an interview with Page Six. She explained, “At the end of the day, I had a full hysterectomy because I had cancer cells in my uterus and cervix.” Vicki added that doctors took out the cancer cells. She revealed she did not have to undergo chemotherapy or radiation treatments. However, Vicki emphasized that she did not have a two-year battle with cancer like many reports misinterpreted.

Vicki also revealed that she dealt with her health issues privately because of Brooks’ wrongdoings and wondered why anyone would fake cancer the way he did. Although the reality star said she never really had cancer, she did say that her doctors told her they found some “cancer cells.” Vicki said, “You don’t go get a full hysterectomy because you have nothing else to do tomorrow. He took it out. When I went for the post-op.” Vicki said it was a good thing the cancer cells found within her were taken out and noted, “That’s it. It’s gone, it’s done, it’s finished, but it then got pushed into all these other lies out there, so the truth is always the truth.”

It is good the former The Real Housewives Of Orange County star decided to clarify the misinformation about her cancer comments. However, one can also understand why she handled her cancer issues privately, given her connection to Brooks and his wrongdoing. Although it’s been years since Brooks confessed his misdeed, Vicki has shown with her latest comments that she is not willing to allow any misinformation to fly without addressing it. Although false news is expected in the world of reality television, one now hopes that with Vicki setting the records straight, the misinformation about her cancer battle will end.