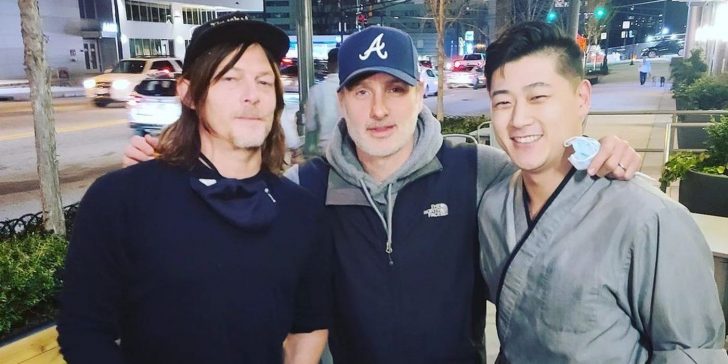 The Walking Dead season 11 star Norman Reedus, who plays Daryl Dixon in the AMC series, is spotted with Andrew Lincoln in Atlanta, Georgia.

The Walking Dead season 11 star Norman Reedus, who plays Daryl Dixon, was spotted with Rick Grimes actor Andrew Lincoln in Atlanta, Georgia. Rick Grimes had been with the AMC’s post-apocalyptic series from the start before his departure in 2018. The Walking Dead season 9 saw Rick taken aboard a Civic Republic Military (CRM) helicopter with Jadis (Pollyanna McIntosh) and flown into the unknown. Not long after Lincoln’s exit, it was announced the walker-killing (ex) deputy would return in a trilogy of feature films explaining his absence from The Walking Dead’s final seasons.

TWD spinoff, The Walking Dead: World Beyond, revealed that the helicopter that took Rick belongs to the CRM, a dangerous organization that polices the new society that has emerged amid the zombie apocalypse. However, where exactly the CRM took Rick has remained a mystery since his supposed final episode. Now, with Danai Gurira’s Michonne looking for her lost beau and The Walking Dead currently filming its final episodes of season 11 in Georgia, fans have wondered if Rick will return to the flagship series.

Instagram user Kingsuh1018 recently shared a photo of himself, Reedus, and Lincoln posing outside the Nagomiya sushi restaurant in Midtown Atlanta. The location is around an hour’s drive from The Walking Dead’s long-time filming location in Senoia. Naturally, many fans were excited to see Daryl and Rick re-united, and the image sparked speculation that Rick may make a season 11 appearance. Check it out below:

A Walking Dead season 11 Rick Grimes cameo seems possible given this image, since filming has yet to begin on the films. The trilogy is produced and written by The Walking Dead universe’s chief content officer Scott Gimple and franchise creator Robert Kirkman. Production was reportedly supposed to begin in the summer of 2020. However, production was delayed due to the COVID-19 pandemic. Despite Lincoln being hopeful filming on The Walking Dead spinoff films would begin last April, spring came and went. However, the proposed Walking Dead movie trilogy is still happening, with its creatives committed to making the first one worth the wait.

In the past, both Lincoln and showrunner Angela Kang have seemed more than open to a last-minute appearance by Rick in The Walking Dead. In its final season 11, Alexandria and company are taking on the last big bad, the Commonwealth, which plays an integral role in Rick’s comics story. Not only would Rick’s (and Michonne’s) return give the survivors a better chance at defeating the Commonwealth, but it would better cap off the series and allow Rick to reunite with his daughter and meet his son. Given all those time jumps, the films could always go back and spectacularly explain his absence after The Walking Dead concludes later this year.

Euphoria: Nate’s Dream Exemplifies How Weird His Story With Cal Has Been