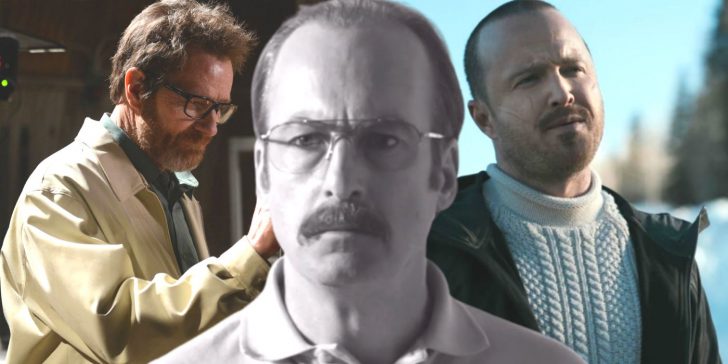 Aaron Paul teases that his appearance as Jesse Pinkman opposite Bryan Cranston as Walter White in Better Call Saul season 6 will be surprising.

Aaron Paul says that his and Bryan Cranston’s cameos in Better Call Saul season 6 will come in a completely unexpected way. The actors originated the roles of meth dealers Jesse Pinkman and Walter White in the ever-popular series Breaking Bad, which ran on AMC for 5 seasons between 2008 and 2013. Although their storyline ended, the Breaking Bad universe continued on with the prequel series Better Call Saul, which follows Bob Odenkirk’s character Saul Goodman during his early life as scrappy attorney Jimmy McGill before he took on the Saul pseudonym. The series, which premiered in 2015, has now run even longer than Breaking Bad with season 6 (its final season) beginning April 18, 2022, slightly delayed by both the pandemic and Odenkirk’s heart attack on set.

Recently, it was revealed that this season of Better Call Saul would be featuring the official return of Walter White and Jesse Pinkman. Although both characters appeared in the 2019 follow-up film El Camino: A Breaking Bad Movie, the timeline of Better Call Saul means that they will most likely be appearing at a time set during the first few seasons of the original series. Given the fact that Better Call Saul season 5 took place 4 years before Pinkman and White began working together, it will still probably require a time jump of some kind. Odenkirk recently teased that Better Call Saul season 6 would be featuring more Breaking Bad crossovers than ever before.

Paul recently spoke with THR about his role opposite Karen Gillan in the upcoming sci-fi comedy Dual. Of course, the conversation naturally turned to the announcement that he and Cranston would be reprising their Breaking Bad roles soon, and he was asked if it was true their cameo would come in a rather unexpected manner. He confirmed that this was the case, adding that “I think people are going to be excited.” Read the full quote below:

Yeah [it’s unexpected]. To be honest, I’m such a fan of Better Call Saul that I just didn’t initially see how they were going to do it. But of course, leave it to Vince and Peter and the rest of the writers to come up with the perfect way. It’s fun. I think people are going to be excited.

There have already been many theories as to how and when Jesse and Walter will appear on Better Call Saul. Given the fact that Saul Goodman first appeared in Breaking Bad season 2 episode 8 and then a subsequent 36 additional episodes, there is plenty of space in the timeline for them to have come visit him. However, one of the most popular fan theories is that this episode will take place during the events of season 2 episode 7 of Breaking Bad, directly before the pair would officially meet Saul.

If there’s one mantra that a viewer can bring to Better Call Saul, it’s to expect the unexpected. While that season 2 timeline might be the most likely way for the characters to chronologically appear in the series, there is still no knowing exactly how this will come about. There’s also no telling whether the characters will directly interact with Saul, or whether the episode will feature the iconic characters passing around each other like ships in the night.