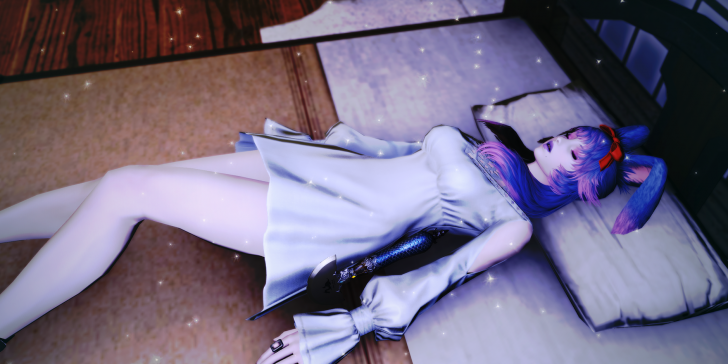 Sleeping in beds in FFXIV is more than a nice little Easter egg. It’s a ritual. It’s a way to show your Warrior of Light that you care about their rest and wellbeing. Certainly more than you care about your own sleep schedule, at least. Never mind the fact that you log off at 2:47 a.m. every night after raiding and meticulously undercutting “LordPackMuuule-2” on the Market Board for six hours. A jingly, lullaby version of the Final Fantasy victory theme plays as you flop onto the sheets — perfectly bookending the explosive sound of booting up the login screen as you log off. Sleeping in a bed inside any inn can make all the difference to your state of mind as a player and a person…

It just doesn’t actually make much difference in-game. You can sleep in beds by entering any in-game inn, clicking on the mattress, and choosing to “log out” or exit game.” Just be aware that this has no mechanical benefit within FFXIV — at least not any benefit you don’t already get without doing it. Not anymore.

Sleeping in a bed actually used to have some very unique benefits. This started all the way back in the original 1.0 release of Final Fantasy XIV. Players could go to sleep, just as you still can at any inn or other personal quarters throughout the game’s capital cities, and then log off. Doing so would sometimes trigger a dream sequence. These were mostly just text on a screen. However, as the original version of the game wound down to be replaced with A Realm Reborn, a “nightmare” sequence was also added. You can still find videos of that cutscene online to this day.

The mechanical benefit of these dream sequences was very slim. You would occasionally find items under your pillow (very loosely) related to the dream itself. Things like food, for example. Though some players report you could also find Relic Weapons under there during the final days of 1.0. This was at a stage where progress wasn’t going to carry over to A Realm Reborn anyway, and the developers definitely did try out a number of fun experiments to keep early adopters entertained.

Technically, sleeping in a bed does still confer “Rested XP.” This is a 50 percent bonus to the XP you earn from basic things like crafting items and killing monsters. You can rest for up to seven real-world days to continue accruing this bonus. It helps you level up your different classes faster and provides a certain benefit to taking a break in reality. This only happens because you’re in a “Sanctuary,” however. This includes basically any noncombat area in FFXIV (not just your private bedroom). Everything from capital cities to tiny outposts in the world will give you the same bonus if you stay there and log out. This, too, used to be different. The early days of A Realm Reborn only conferred Rested XP if you logged out from a bed. Once upon a time. That restriction was lifted many years ago.

There’s also “Dreamfitting,” of course. The Endwalker expansion for FFXIV introduced this new system for experimenting with fashion without the need to pay real-world money first. This has nothing to do with logging out or “sleeping” in-game in the traditional sense. Though the usual brief cutscene of your character going to bed does play (alongside the chilled-out version of the Final Fantasy victory theme).

Dreamfitting still doesn’t provide any gameplay benefit. However, it does allow you to check out your character model in-game and try on different outfits from the Mog Station: the paid store that provides things like exclusive fashion and dyes for real-world money. You can also accomplish this out-of-game with third-party applications — including our very own FFXIV model viewer — but Dreamfitting is an easy way to do it when you are actively playing. The only downside is that you need to return to an inn. You can’t check out the fashion while simply wandering the world.

The only other reason you might currently want to sleep in a bed in FFXIV is shown at the top of this article. You can use the game’s photo mode, a.k.a. the “/gpose” command, to take themed screenshots of your character. The emote “doze” has a unique interaction with beds in the game. It locks your character into place on the mattress and lets them rest as if they were sleeping normally. You can then use the emote “change pose” to switch to different postures. All while staying accurately asleep on the bed itself.

This might be useful for players who want to make themed outfits or poses for their character. For example, I did my best to make a pajamas Glamour for my Warrior of Light in the featured image at the top of this article. Various types of role-playing are a huge part of FFXIV for a large chunk of the community. And while it’s not my thing, exactly, there is something nice about letting my player character log off as if they were actually going to bed for the night. Like I said before: it’s all about the psychological benefits. Finally I can live out my fantasy of falling asleep immediately and getting a full eight hours’ rest…

That’s pretty much all there is to it! Sleeping in FFXIV doesn’t do much. You can get the Rested XP elsewhere and Dreamfitting, while a nice option, isn’t exactly revolutionary. It’s up to you whether the nice little lullaby is worth wandering back to Limsa Lominsa to snooze before logging off when you play.