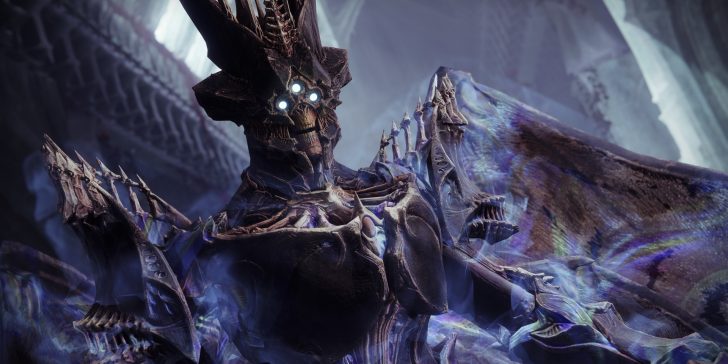 Kept you waiting, huh? Since the last one of these, we’ve seen the release of two major Destiny 2 expansions as well as the introduction of a number of new characters. So let’s just dive right in — we’re talking about what the movers and shakers of Destiny 2 smell like.

Certified Best Boy, Crow had his first big fuck-up in Season of the Risen. We still love him, though. As a Hunter, he’s often on the move and scouting out enemy movements, so he probably isn’t dousing himself with perfume on the regular. When he’s back in the Tower, though, he probably opts for something a little nostalgic — maybe something from the Dreaming City, to remind him where he comes from. The brewing of Queensfoil is described as having an “acrid” scent, so maybe not that. Something alien, perhaps, but familiar. Fresh, spicy, and aromatic.

Steal the scent: Try Ani by Nishane for a warm, amber fragrance with notes of ginger, pepper, bergamot, and cardamom. Complex, lingering, and bright, it would fit right in with the Dreaming City’s lush hills and gorgeous architecture.

After a long run as kind of a dick, Saladin got a great arc this season, and now hangs out with Caiatl on her War Council. The ancient Iron Lord seems all business, but there’s more to him than meets the eye. He wears immaculate filigreed armor with a functional and stylish fur collar, and appreciates a good brazier. An ancient mystery of a man, he smells of an impromptu fire lit in a silent forest — ash, earth, and smoke.

Steal the scent: Maybe it’s just because I’ve been so enamored with his character development in Season of the Risen, but I’m giving Saladin one of my go-to fragrances from this past winter — Feu Secret by Bruno Fazzolari. It’s an elusive, subtle, woody perfume that recalls half-forgotten memories of chance encounters, old friends, and winter nights.

Leader of the Cabal Empire and Commander Zavala’s-maybe girlfriend, Empress Caiatl is all about strength and stability. She wears an ornate armor reminiscent of her father’s opulent furnishings, but that’s where the similarities end. Caiatl is a shrewd leader who puts the interests of her people first, but one who also knows the value of appearances. If she shows up to meetings with the Vanguard decked out in her gold and jewels, I see no reason why she wouldn’t take the same approach to her scent. I have no idea how Cabal smell (though one lore entry has a Guardian claim that one smells like “a hot barnyard”) or what fragrances they find appealing, but as giant space rhinos I expect they value a good, strong musk. But Caiatl wouldn’t just roll up in a plain white musk. No, she’d smell of amber, spiced fruits, and oud too.

Steal the scent: I gave Calus Ambre Sultan, and I don’t think Caiatl would be rocking exactly the same scent profile as her dad, so let’s say her particular blend is a little closer to Amouage’s Jubilation XXV, which has top notes of coriander, blackberry, and frankincense that dry down into patchouli, ambergris, and cedarwood.

The Witch Queen expansion sees Guardians taking on the Hive God Savathun herself in person, ostensibly getting close enough to catch a whiff of whatever a millennia-old, newly resurrected and Light-empowered anthropomorphic space moth smells like. My best guess? Floral, milky, bright, strangely alluring and beautiful but with something darker lurking beneath the surface.

Steal the scent: To smell like a Wizard who came from the Moon, you’ve simply got to try Stora Skuggan’s Moonmilk, a fragrance named after the strange substance found in limestone caves.

Like Savathun, Mara Sov is a high-level schemer. She’s all about the back rooms of back rooms, making deals with forces beyond most people’s understandings. Mara Sov has seen some shit. And while we might not like how she treated Crow in Season of the Lost, or how she kind of gives us the run-around in Witch Queen, you can’t deny that she’s got her whole situation on lock.

Steal the scent: If you want to project Mara Sov’s sense of confidence and smell like you, too, just came from a whiskey and cigars backroom meeting with dark powers to determine the fate of the universe, try Maison Margiela’s Jazz Club. With notes of tobacco and rum, it’s marketed as a men’s fragrance — but women who have the Queen of the Awoken’s confidence can pull it off in a major way too.

The master of the Crucible, Shaxx hasn’t been up to much in the narrative lately. He’s famously no-nonsense, having dropped his full title of “Warlord” because it was too many syllables and keeping his iconic one broken horn on his helmet — which, of course, stays on — rather than replacing it. So what does a seasoned warrior like him smell like? I could say gunpowder, or armor oil, or whatever, but I’m going to go wild here and say that Shaxx smells surprisingly sweet and sophisticated. He’s a man who can appreciate the finer things — he has The Tempest memorized — and loves Vanilla Blade cookies during the Dawning. It’s not too hard to imagine a musky vanilla scent emanating from him as you draw closer to his little slice of the Tower.

Steal the scent: Indult’s Tihota is the vanilla fragrance par excellence, a pure yet dark take on the seemingly-sweet scent with slight musky tones, perfect for the Titan who defies expectations.

You don’t really care, do you?

Steal the scent: Just slap on some Dior Sauvage or Paco Rabanne 1 Million.